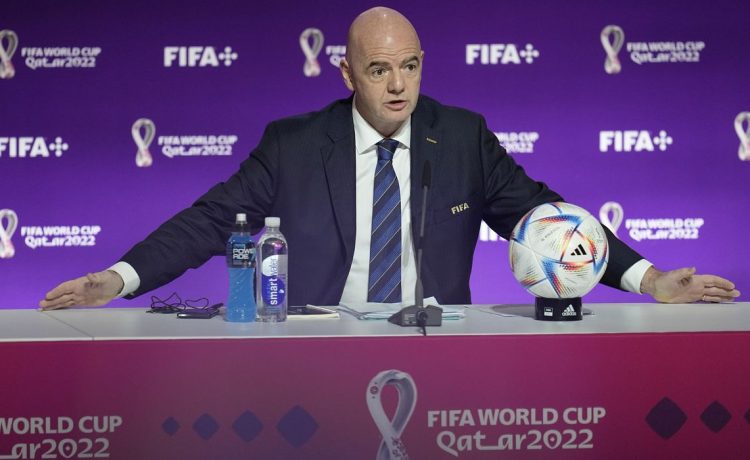 World soccer’s most powerful figure is handing out red cards to anyone who dares to question FIFA’s decision to choose Qatar as the first Middle Eastern nation to hold the quadrennial World Cup.

Qatar’s suitability as a host has been a rising topic of discussion as the U.S. and 31 other nations begin the monthlong tournament this weekend. In addition to grumbling over whether the country is ready to host the massive event, critics have zeroed in on Qatar’s questionable stands on civil liberties, the treatment of migrant workers and its record on gay rights.

But FIFA President Gianni Infantino was having none of it in an extraordinarily combative press conference Saturday on the eve of the tournament, defending Qatar’s preparations and accusing its critics of rank hypocrisy.

“I’m European,” he told a packed news conference, part of a nearly 90-minute monologue scolding the press for its coverage of the tournament and its criticisms of the organizers. “For what we Europeans have been doing around the world in the last 3,000 years, we should be apologizing for the next 3,000 years before starting to give moral lessons to people.”

Mr. Infantino, the Swiss-born son of Italian immigrants who has led the global soccer organization since 2016, said Qatar has made progress in its treatment of the large contingent of foreign-born workers within its border, and said FIFA has kept the issue front and center from the very beginning.

“I came here six years ago and addressed the matter of migrant workers straight on, in my very first meeting,” Mr. Infantino said at one point. “How many of these European or Western business companies, who earned millions and millions from Qatar and other countries in the region — billions every year — how many of them addressed the rights of migrant workers with the authorities?”

“I have the answer for you,” he added. “None of them. The one-sided moral lesson is just hypocrisy.”

He even defended the hosts’ last-minute decision to ban the selling of beer during matches, noting that many European soccer stadiums observe the same policy and fans can be expected to go three hours without a beer.

At another point, he rose from his seat, spread his arms wide and said, “You want to criticize someone, come to me. Criticize me. Here I am. Crucify me.”

FIFA officials have nervously tried to keep the focus in Qatar on the pitch. Mr. Infantino and FIFA Secretary-General Fatma Samoura sent out a memo to all 32 teams earlier this month pleading with them not to politicize the event or embarrass the host.

“We know football does not live in a vacuum, and we are equally aware that there are many challenges and difficulties of a political nature all around the world,” the letter reads. “But please do not allow football to be dragged into every ideological or political battle that exists.”

Following tradition, the home Qatar squad will kick off play Sunday in Doha against Ecuador. Mr. Infantino predicted things would go smoothly, despite this World Cup’s many critics.

“Doha is ready. Qatar is ready. It will be the best World Cup ever, of course,” he said.