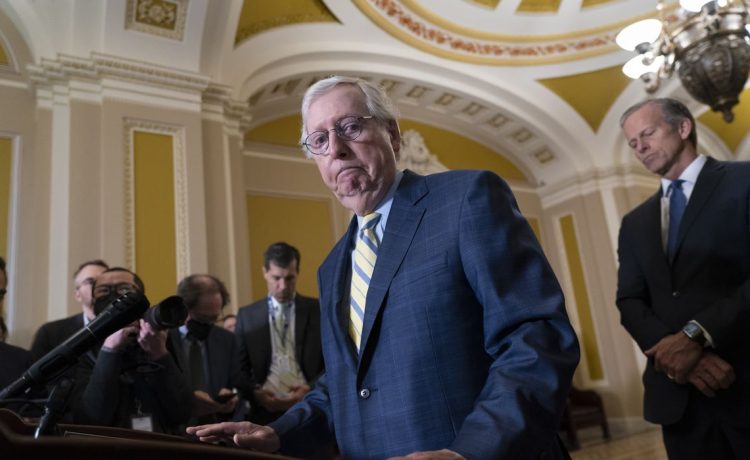 A small but vocal group of Republican senators is furious with GOP leadership over the agreement with Democrats to approve a massive year-end spending bill that will fund the federal government through next September.

The bipartisan deal has created a schism between Senate Minority Leader Mitch McConnell and Republican colleagues in both chambers — including House Republican Leader Kevin McCarthy — who accuse Mr. McConnell and his leadership of rolling over to help Democrats pass a major budget on the brink of a government shutdown and the holidays without knowing what’s in it.

“I don’t see any reason why Republicans should jump to [Democrats’] aid,” said Sen. Mike Lee, Utah Republican. “They can’t do this without at least 10 Republicans in the Senate. I don’t know why any Republican, let alone 10, would want to help them.”

Instead, many Republicans want to hold out on a long-term funding bill until January when Mr. McCarthy is expected to take over as speaker of a GOP-controlled House.

McCarthy brushed aside concerns that his opposition to the McConnell-favored spending plan is little more than an attempt to shore up support for his speakership bid among the budget hawks in the House GOP conference.

“It wouldn’t have anything to do with being speaker,” the California Republican told reporters. “It has to do with the American public and what the future of America is going to be when it comes to fiscal resources.”

But McConnell allies warn that the argument for waiting until January is asking for a showdown that would likely result in a shutdown.

“I don’t think any new Congress should be forced into trying to do the last Congress’ work, and even more so if you’re changing control,” said Sen. Roy Blunt, Missouri Republican. “It’s asking for big problems.”

House Republicans have privately told their Senate counterparts that they want to pass the budget now to avoid the fiscal policy drama in January, according to a Senate GOP aide who requested anonymity to discuss private conversations. The public handwringing from critics is for the theatrics, they suggested, and that those who are opposed secretly have a “vote no, hope yes” mentality.

“We’re on defense. We’re dealing with the cards that we were dealt,” Mr. McConnell told reporters Tuesday. The current deal, he added, is “far and away the best we could do, given the fact that we don’t control the floor or the government.”

But his colleagues offered sharp jabs Wednesday, accusing him of trying “to coerce us, to force members to vote on something they’ve never even seen,” said Sen. Ron Johnson, Wisconsin Republican.

“Merry Christmas, America. The Democrats and big government Republicans will be offering you a Christmas tree,” said Sen. Rand Paul, Kentucky Republican. “A Christmas tree in Washington is a bill that has something on it for everyone. You won’t know what it is until you get it. You won’t be able to read it until it’s done. But it will happen because the only thing that invariably happens in Washington is they will get together to spend money.”

Negotiators have yet to reach an agreement on topline numbers, but the figures are expected to clock in around $858 billion in defense spending and $787 billion in nondefense spending, in addition to more Ukraine aid. Republican backers, including Mr. McConnell, have touted the deal as an accomplishment that acts as a check on Democrats.

Congress hopes to pass a one-week stopgap funding measure by Friday at midnight, or else a partial government shutdown will ensue. The extra time is meant to allow negotiators space to cobble together legislative text before voting on the final budget by Dec. 23.

Mr. Lee, Mr. Scott and others, whose attempts to pass a stopgap measure for funding until early February were rebuffed, would not say whether they would object to swift passage of the one-week spending bill. Consent will be required from all 100 senators in order for swift passage.

Sen. Mike Braun, who is among those that say Republicans are being “rolled” by Democrats and should reject a spending agreement, said he would not seek to block a one-week stopgap.

“I’m not one for last-minute dramatics,” the Indiana Republican said. “Stuff that takes this long to get this bad is not going to change in a week.”