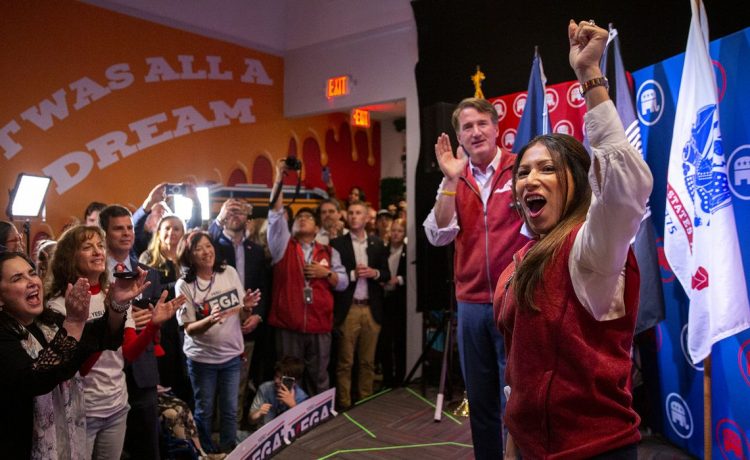 ANNANDALE — Long-shot Republican candidates are hoping Virginia Gov. Glenn Youngkin will encourage voters to turn out for them in Democratic-heavy districts, mirroring the upset that the governor mounted last year.

“They told us last year a Republican can’t win statewide. You can’t elect an attorney general, lieutenant governor, and governor who are Republicans in Virginia. Well, guess what? They forgot to do one thing. Ask the voters,” said Mr. Youngkin, who last year defeated former Gov. Terry McAuliffe, a Democrat.

The campaigns Ms. Lipsman and Mr. Myles, both of whom are running in deep-blue districts, have received less attention than the GOP newcomers in Virginia’s swing districts, the party sees potential victories in a vulnerable year for Democrats.

“Gov. Youngkin has been very supportive,” Ms. Lipsman told The Washington Times. “It’s a pretty difficult district, so they’re giving us as much support as possible.”

The candidate also lamented that her race has not garnered resources from the national Republican Party because of Democrats’ advantage in the area.

Mr. Myles said it’s been challenging to get attention on his race.

“It’s really been all about Yesli Vega and Hung Cao,” Mr. Myles said.

While those two Democratic incumbents also are running in the Washington TV market, their districts’ parts of Northern Virginia are mostly farther away from the center of government, and include more conservative and rural areas.

Mr. Youngkin said he came out to support the candidates because they had strong grassroots campaigns, adding that the energy in the crowd reminded him of his victory last year.

Ms. Lipsman focused her speech on attacking Mr. Beyer as being “compromised by China” after news broke that he fired his scheduler last week due to her seeking Capitol Hill relationships on behalf of the Chinese embassy.

“We need a leader in Congress who is able to get to work on Day One to stop our biggest adversaries, our biggest external threats of North Korea, Russia, and China,” Ms. Lipsman said.

Mr. Beyer’s office said he had no knowledge of the matter, and that he was “deeply upset” of learning of his scheduler’s activities.

His office did not immediately respond to an inquiry about Ms. Lipsman’s calls for an investigation.

Mr. Myles touched on crime, inflation, the border, and education in a campaign that mirrored the governor’s winning formula last year.

“How could anybody in their right mind not want to vote for Republicans this year? It’s never been more obvious to everybody out there. You all see it,” Mr. Myles said.

“The Democrats have gone so far-left, so far off the rails that I don’t even recognize the party anymore. And we really need to send a loud message to the Democrats in the election here in November,” he said.

Some voters said they hope they can start breaking the blue barrier of Northern Virginia with every election.

The Connolly campaign “is focused basically on ‘I’m going back because I’m a Democrat and Fairfax County is blue,’” said Richard Lee of Burke, who is voting for Mr. Myles. “He’s bragging about how he and his colleagues have screwed up the economy, and I think we need to get new leadership and new representation.”

Ms. Lipsman and Mr. Myles are bound to face an uphill battle on Tuesday.

In the past two election cycles, Mr. Beyer took at least 75% of the vote. Likewise, Mr. Connolly secured over 70%.