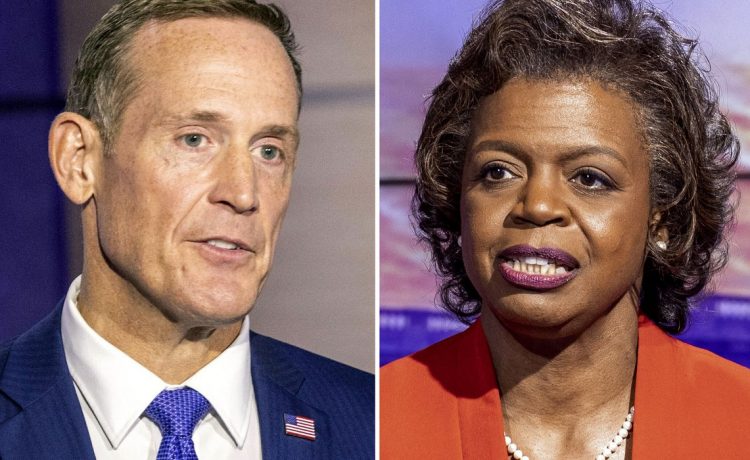 Republican bigwigs kicked off early voting in North Carolina on Thursday by stumping for Senate candidate Ted Budd, hoping to drive momentum as a series of polls show GOP candidates are making inroads due to President Biden’s lagging approval numbers and economic concerns.

“Only 19 days until we take back the Senate and stop the Biden-Beasley agenda!” Mr. Budd tweeted with photos of Mr. Scott and Ms. McDaniel at his side.

His Democratic opponent, Cheri Beasley, a former chief justice of the state Supreme Court, predicted the visit by GOP figures would backfire. She pointed to a plan authored by Mr. Scott this year that would have all federal legislation sunset after five years, a plan Democrats say is a threat to Social Security and Medicare entitlements that are precious to senior voters.

“Congressman Ted Budd is campaigning with Rick Scott – the ringleader of the far-right plan to sunset Social Security and Medicare,” Ms. Beasley tweeted. “Make no mistake – if Budd is elected, he will support Scott’s plan and leave our seniors behind.”

Ms. Beasley is looking for a boost from an event Tuesday in Raleigh headlined by musician Dave Matthews. She also will be joined by Democratic National Committee Chairman Jaime Harrison.

Mr. Budd led Ms. Beasley by 6 points in a midweek poll by The East Carolina University Center for Survey Research. That’s up from a 3-point lead for Mr. Budd last month — and a sign his campaign may be benefiting from the rising GOP tide across the country.

His most notable gains came from women. Pollsters said Ms. Beasley’s lead among female voters shrank to 2 points from 11 points in early September, according to ECU pollsters. A separate poll from Trafalgar Group said Mr. Budd was up by 4 points, 48% to 44%.

Voters will have the final say in Nov. 8 election, with in-person early voting running from Thursday to Nov. 5.

Political analysts caution the ECU poll of about 900 likely voters might not tell the full story. The FiveThirtyEight average has Mr. Budd at just 2 points ahead — so the race remains tight.

“Once we can add a few more recent polls to the mix, we should be able to untangle whether this is a trend or an outlier,” said Christoper A. Cooper, a politics professor at Western Carolina University. “Regardless of the answer, it’s notable that the options are either neck and neck race or a Budd lead. No one is arguing that Beasley is ahead.”

Voters have consistently rated the economy and inflation as their top concerns while the Democrats’ top issue — abortion access — ranks lower, causing worry for Mr. Biden’s party at the national level.

A New York Times/Siena poll from earlier in the week sounded alarm bells because independent women were breaking for the GOP in double digits.

Mr. Budd has been attacking Ms. Beasley as too likely to back Mr. Biden’s big-spending agenda, while the Democrat says Mr. Budd has an “extreme” record that will side with big business over regular folks.

Democrats control the evenly divided Senate because Vice President Kamala Harris serves a tie-breaking vote. Mr. Biden wants to expand his majority in the Senate or at least hold onto the upper chamber.

The GOP is expected to retake the House.

Mr. Biden said Thursday he feels good about the Democrats’ chances of holding the Senate.

“I think so. It ain’t over till it’s over,” he told reporters at a sandwich shop in Pittsburgh, Pennsylvania.

“I would be paying attention to any potential shift in this in coming weeks to see if these latest polls really are part of a trend that shifts the race more clearly towards Budd and would cause Democrats to focus resources elsewhere,” he said.

Ms. Beasley and Mr. Budd are competing to replace Sen. Richard Burr, a Republican who is retiring after three terms.

Mr. Budd has represented the state’s 13th Congressional District since 2017 and cleared the primary field earlier this year with an assist from former President Donald Trump, who won North Carolina in both of his 2016 and 2020 presidential campaigns.

Those Trump victories undercut the idea the Tarheel State is rapidly turning blue, though it does have a Democratic governor in Roy Cooper and a Democratic-leaning state Supreme Court.

Ms. Beasley is a former public defender who became a judge and won a seat on a state appeals court. She was appointed by the Democratic governor as North Carolina’s chief justice in 2019 but lost a bid for a full term in 2020. She is parlaying that legal experience into a campaign pitch that says she will be a fair and independent senator and knows how to “keep students in classrooms and out of the courtroom.”

If elected, she would be the first Black senator from North Carolina.

The North Carolina race has been overshadowed by fireworks in Georgia, where the GOP is grappling with reported scandals around football legend Herschel Walker, and in Pennsylvania, where Democratic Lt. Gov. John Fetterman says his stroke in May won’t prevent him from serving as a senator.

That might be starting to change as big names head to the Tarheel State.

Mr. Budd enlisted Matt Schlapp, the chairman of the Conservative Political Action Coalition, for an annual picnic southwest of Winston-Salem late Thursday while the Democrats prepared to welcome Dave Matthews to the capital on Tuesday.

“The world has finally caught wind of the N.C. Senate race and although it won’t achieve the prominence of Georgia or Pennsylvania — no TV stars or athletes here. These kinds of events are attempts to increase the level of excitement and mobilize voters,” Mr. Cooper said. “The campaigns certainly don’t expect Dave Matthews or Rick Scott to pull an undecided voter to their side, but rather to get a few more folks off the couch and to the voting booth. If that voter went to high school in the early 1990s, Dave Matthews singing ‘Arts Marching’ might just do the trick.”