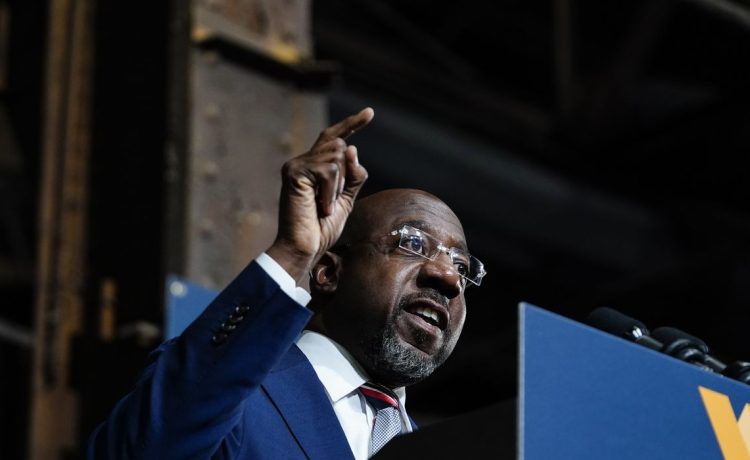 Georgia Republicans see a path to victory in a last-minute push to get voters to turn out Tuesday for Senate candidate Herschel Walker, who is now seen as the underdog in his bid to unseat Democratic incumbent Raphael Warnock.

Mr. Warnock, who was first elected in a 2021 runoff and is seeking a full term, is viewed as the slight favorite in what is otherwise a toss-up race for a seat that will decide whether Democrats will control an evenly split Senate or win a critical 51st seat.

Democrats dumped millions of dollars into the race, using much of it on campaign ads and to push early voting in key party strongholds in the state.

Super PACs have spent $16 million more on Mr. Warnock, 53, than Mr. Walker, 60, in what has become the most expensive race in 2022, according to OpenSecrets, which tracks political spending.

But Republicans are ramping up their get-out-the-vote efforts in the final three days before the election, with plans to pour millions of dollars into phone banks, mailers, door-knocks and other efforts they say will erase the lead Mr. Warnock likely gained with early voting.

“The early voting demographics suggest that the Democrats have done an exceptional job in getting their voters out early,” Matt Towery, a Georgia pollster, told the Washington Times. “The GOP effort has focused more on raising funds than gathering early votes, presumably to fund their 72-hour push for voters prior to Election Day. While that is a risky strategy, it might work.”

Neither Mr. Warnock, a Baptist minister, nor Mr. Walker, a former football star, topped 50% in the Nov. 8 election, falling short of the votes needed to avoid a runoff.

Mr. Walker finished behind Mr. Warnock by about 37,000 votes out of more than 4 million cast.

Mr. Walker, plagued by negative allegations about his personal life and accusations that he’s under-qualified to serve in the Senate, didn’t benefit much from Mr. Kemp’s coattails in the general election, pulling in 200,000 fewer votes than the popular governor.

The GOP believes they can win back a sizable chunk of those voters on Tuesday.

Most polling shows the race is a toss-up or gives Mr. Warnock a small edge, but Republicans say their polling suggests Mr. Walker can win.

Ralph Reed, the state’s former GOP chair who is now the head of the Faith and Freedom Coalition, said internal polls show up to 15% of the voters who picked Mr. Kemp and Mr. Warnock on Nov. 8 will now turn out for Mr. Walker in the runoff, while the 81,000 voters who picked Libertarian candidate Oliver Chase plan to vote for Mr. Walker by a 2-1 margin. Mr. Reed said late deciders are likely to break for Mr. Walker, according to their polling.

Republicans are now focused on getting those voters to turn out between now and Tuesday.

It’s all about getting that vote out,” Mr. Reed said. “If I’m right about how the Libertarian voters break, and the Kemp voters break, Herschel will win.”

In the next few days, Mr. Reed’s organization, which does not endorse candidates, plans to make one million calls, send out two million texts and knock on 400,000 doors in a bid to rally the pro-life and evangelical community to get out and vote.

Mr. Kemp has also joined the effort to elect Mr. Walker, after refraining from endorsing him or campaigning with him in the general election race. Mr. Kemp rerouted his campaign team to the Walker election effort.

He said the Walker campaign has saturated the airwaves with powerful campaign ads promoting the character and authenticity of Mr. Walker and slamming Mr. Warnock over his scandals, including allegations of child abuse at one of his church camps.

David Johnson, a Georgia-based GOP strategist, said there are other reasons to believe Mr. Walker can pull out a victory.

Mr. Johnson said President Biden is dragging down Mr. Warnock, and Mr. Walker should feel good that he is still competitive despite being dramatically outspent.

“Warnock is dominating the airwaves — even kids going on Youtube to play video games are getting Warnock commercials,” he said. “He is on the airwaves nonstop and the thing is he still hasn’t really pulled away.”

Mr. Reed said to expect the GOP spending to accelerate dramatically in the coming days and to also see a significant uptick in Republican voting between now and Tuesday as Republican political groups pour money into the get-out-the-vote drive.

“There are massive amounts of funds budgeted for Saturday, Sunday, Monday and Tuesday to get those folks to the polls,” Mr. Reed said. “Democrats have owned the early vote up until now. The remaining early vote, according to our modeling, is Republican.”