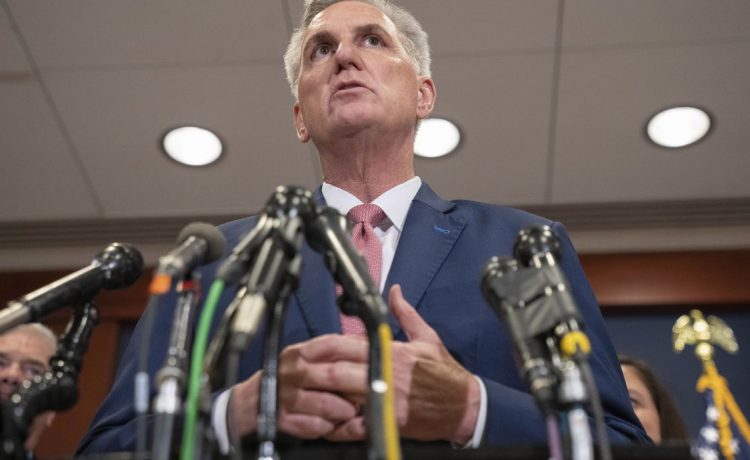 House Minority Leader Kevin McCarthy said he will follow through with his pledge to kick Rep. Ilhan Omar of Minnesota off the House Foreign Affairs Committee in the new Congress.

Ms. Omar, who is losing her committee assignment over her anti-Semitic rhetoric, is among a handful of Democratic lawmakers Mr. McCarthy will boot from committees for various offenses. He is following a precedent set by House Speaker Nancy Pelosi in the current Congress.

“I made another promise to you last time. There was this Congresswoman Ilhan Omar,” Mr. McCarthy told attendees at a Republican Jewish Coalition event in Las Vegas on Saturday, eliciting boos from the crowd.

“That’s a rightful boo,” he said. “I remember what she said about Israel. … I remember it so much. I promised you last year, that [when I am] speaker, she no longer would be on Foreign Affairs, and I’m keeping that promise.”

Ms. Omar often lashes out against Israel and once likened the Jewish state to Nazi Germany and the Soviet Union. She also lumped the U.S. and Israel in with terrorist groups,  saying: “We have seen unthinkable atrocities committed by the U.S., Hamas, Israel, Afghanistan and the Taliban.”

At least two other House Democrats — Reps. Adam Schiff and Eric Swalwell, both of California — can expect to be kicked off from committees they currently serve on, people close to Mr. McCarthy told The Washington Times.

Mrs. Pelosi, California Democrat, set the precedent when she removed Republicans — first Rep. Marjorie Taylor Greene of Georgia and later Rep. Paul Gosar of Arizona — from all their committee assignments over incendiary online posts and rhetoric.

In February 2021, the Democrat-run House voted to strip the newly elected Mrs. Greene of her committee assignments over social media posts embracing conspiracy theories such as questioning if a plane really hit the Pentagon on 9/11 and her “liking” a comment that said “a bullet to the head would be quicker” to remove Mrs. Pelosi from office.

Mr. Gosar’s offense was posting an animated video on social media depicting a swordsman attacking President Biden and Rep. Alexandria Ocasio-Cortez. The House voted to censure him and kick him off his committees.

The punishments set to be meted out under Mr. McCarthy, California Republican, will be tailored to each Democrat’s offense, ejecting them from a single committee rather than removing them from all their committees.

Mr. McCarthy, who is poised to win the speaker’s gavel when the House GOP takes the majority on Jan. 3, plans to restrict Mr. Schiff and Mr. Swalwell from serving on the House Permanent Select Committee on Intelligence.

Mr. Schiff, who served as the committee’s top Democrat during the Trump administration, was a chief promoter of the now-discredited dossier compiled by British ex-spy Christopher Steele that fueled conspiracy theories about Trump-Russia collusion to rig the 2016 presidential election.

He also said then-Rep. Devin Nunes, California Republican, was wrong to criticize the FBI for relying on the Steele dossier to get warrants to surveil Trump campaign figure Carter Page.

Mr. Swalwell has said plans to remove him from the committee were mere “retaliation” for the treatment of Ms. Greene and Mr. Gosar.

Mr. McCarthy has said that committee stripping is a Democratic invention and that before Mrs. Pelosi did it, the House majority had never interfered in the minority party’s committee assignments.

Rep. Gregory Meeks of New York Democrat, who currently chairs the House Foreign Affairs Committee, said the GOP will “self-destruct” if it removes Democrats from committees.

“What we did in the majority was trying to move forward for America and remove those that were making physical threats against others,” Mr. Meeks said.

Rep. Ruben Gallego, Arizona Democrat, said it would be a bad look for the new Republican majority.

“If they want to waste their time and [show] the United States that they’re here just for retribution and not for actually doing things to help people, that’s not a good way to start,” Mr. Gallego told The Times.

He said the Democrats’ treatment of Ms. Greene and Mr. Gosar was appropriate. “It’s always a good precedent to tell White supremacists that they have no place in Congress,” Mr. Gallego said.

Mr. Swalwell and Ms. Omar sit on other committees — Judiciary and Labor, respectively — but unlike what happened to Mr. Gosar and Mrs. Greene, there is no indication from House Republican leaders that the Democrats will be rendered without committees.