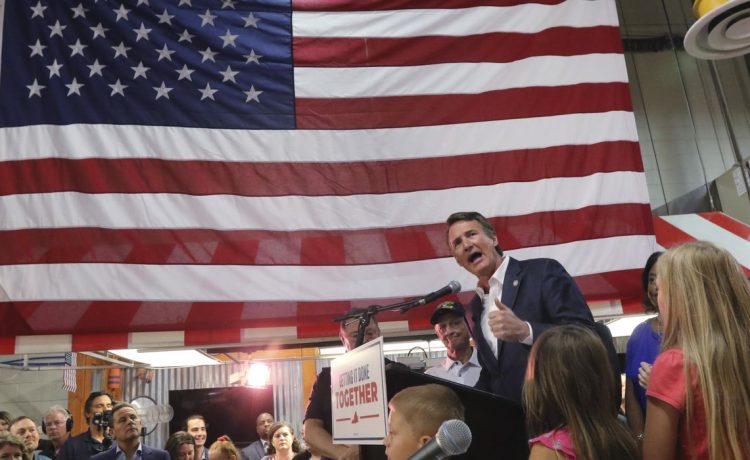 RICHMOND, Va. — To promote the recently signed Virginia budget and its array of tax cuts, Gov. Glenn Youngkin hosted two high-energy campaign-style celebrations, complete with bright lighting, throngs of supporters and a booming playlist that harkened back to his winning run last year.

Other bill signings and news conferences in Richmond have featured a similar flair, like a carefully staged gas-tax proposal announced at a gas station where Youngkin washed windshields for drivers. And in the otherwise plain governor’s briefing room, a collection of Virginia and American flags has been added.

Youngkin is also increasingly expanding his focus beyond Richmond’s Capitol Square. He was in Nebraska this month to give the keynote speech at the state GOP convention. He plans additional stops on behalf of Republican gubernatorial candidates after Labor Day, along with appearances for candidates in some of Virginia’s most competitive congressional races.

In his first six months as governor, Youngkin has moved quickly to assert himself as a new voice in the party. It’s a dramatic and tightly choreographed transformation for a political newcomer who appears to be carefully cultivating his public image in a way that’s driving talk about his possible ambitions for higher office.

“By and large they have an operation that’s more coordinated, scripted,” said longtime Virginia political analyst Bob Holsworth. “They have an image they want to put forward, and they’re not trying to do anything that could detract from that.”

Speculation that Youngkin, a former private equity executive, might seek higher office – perhaps even a 2024 presidential bid – took off the moment he defeated Terry McAuliffe in a race the former Democratic governor entered as the perceived favorite. Virginia does not allow an incumbent to run for a second consecutive four-year term.

Youngkin drew national attention for navigating a win in a state long trending blue, running on a solidly conservative platform while keeping former President Donald Trump at a distance and impressing voters who found the candidate to be friendly and sincere.

Some speculate Youngkin might make a shortlist as a vice presidential contender or eventually challenge one of Virginia’s Democratic U.S. senators. He has been coy about his future, saying in recent interviews that he’s focused on Virginia but declining to rule anything out.

The 55-year-old was sworn in Jan. 15 and recently wrapped up work from his first legislative session, which saw some of his top priorities defeated by the Democratic-controlled state Senate. But he emerged with plenty to promote after focusing on specific campaign pledges and working to push Virginia to the right.

A few Democrats joined with Republicans on votes to ban school districts from imposing mask mandates, regulate sexually explicit classroom materials and expand a school innovation initiative Youngkin pushed. The compromise state spending plan enacts tax cuts – many of which Youngkin campaigned on – expected to save a family of four over $1,100 a year.

His administration has also loosened state COVID-19 quarantine and mask guidance beyond the federal government’s recommendations.

Looking ahead, he has indicated he would like to see a 15- or 20-week abortion ban enacted next year. Virginia currently permits abortions in the first and second trimesters, and in the third trimester only if three physicians certify that the mother’s mental or physical health is at serious risk.

All the while, Youngkin is proving himself to be a strong fundraiser, boosted through a newly formed political action committee. The PAC, Spirit of Virginia, raised more than $1.5 million in donations over $10,000 or more during the second quarter of the year. That was far more than other governors brought in during the similar period, even after adjusting for inflation, according to the nonpartisan money-in-politics-tracker, the Virginia Public Access Project. Total receipts during the quarter were over $2.2 million, and the PAC reported spending just over $1 million.

The governor, who appears with some regularity on Fox News, has recently attracted or participated in a blitz of splashy media coverage, from a TIME magazine profile to his second Sunday morning news show. A Washington Post opinion column said it was “good news” that he was “seriously” contemplating a presidential bid.

In Richmond, Youngkin has selectively engaged with the media, withheld public records requests in cases where his office has wide discretion and released fairly limited details about his schedule, which in recent weeks has contained few public events. He did not agree to an interview for this story.

Spokeswoman Macaulay Porter said the governor is committed to engaging with Richmond journalists and noted that Youngkin routinely answers questions after his public events.

Youngkin has evaded recent questions about Trump, who has been mulling a new presidential campaign as soon as this summer.

The governor was asked on CBS’ “Face the Nation” whether Trump should stop making false claims that the 2020 election was stolen.

“Well, let me begin with my trip to Nebraska, which was really great fun,” Youngkin responded. He went on to avoid directly answering the question three more times.

Some Democrats say Youngkin has been more focused on elevating his profile than on governing.

“His political ambition is costing Virginia its world-class economic status – and that is a damn shame,” Susan Swecker, chairwoman of the state Democratic Party, said in a statement after Virginia fell from first place to third in CNBC’s “Top States for Business” ranking.

But longtime state Sen. Chap Petersen, a moderate Democrat from northern Virginia who joined Republicans to effectively end school mask mandates, expressed a modicum of approval of the governor’s leadership. Petersen said Youngkin had helped return the state to a sense of normalcy as it reemerged from the heights of the pandemic.

Petersen did say he was disappointed in several of the administration’s actions he called “petty,” including the governor’s veto of bills from a colleague who led the fight against the appointment of a Cabinet nominee. Petersen said Youngkin might accomplish more in Virginia if he dialed back the partisanship.

“I sure hope he’s focused on his current job,” Petersen said.