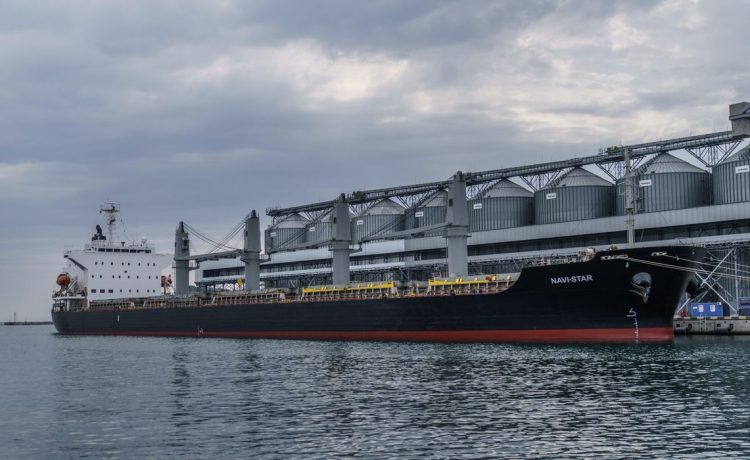 Ships were transporting grain Monday from Ukrainian ports, despite Russia’s decision to pull out of a U.N.-brokered program to export grain from the war zone.

Moscow apparently has opted not to reimpose a blockade that experts said could have caused world hunger.

The U.N. said Sunday that six ships carrying more than 186,000 metric tons of grain and other foodstuffs from Ukrainian ports were underway. Two of the cargo ships, the African Robin and Ikaria Angel, are heading to ports in Algeria and Djibouti with more than 60,000 metric tons of wheat.

U.S. officials criticized Moscow for pulling out of the UN grain export program, accusing the Kremlin of “weaponizing food in the war it started.” Secretary of State Antony Blinken said the move is “exacerbating already dire humanitarian crises and food insecurity.”

Following Russia’s decision to pull out of the grain export program, Turkey and the U.N. will provide 10 inspection teams to confirm that 40 outbound vessels are carrying only legitimate products.

“This inspection plan has been accepted by the delegation of Ukraine. The Russian Federation delegation has been informed,” U.N. officials said.

Oleg Nikolenko, a spokesman for Ukraine’s Foreign Ministry, said global prices for wheat have increased by 5% since Russia’s suspension of the grain deal.

“Millions in Africa and Asia will face malnutrition and hunger because of Moscow’s cruelty,” Mr. Nikolenko tweeted. “Ukraine wants to continue grain exports to those in need. Don’t let Russia starve the world.”