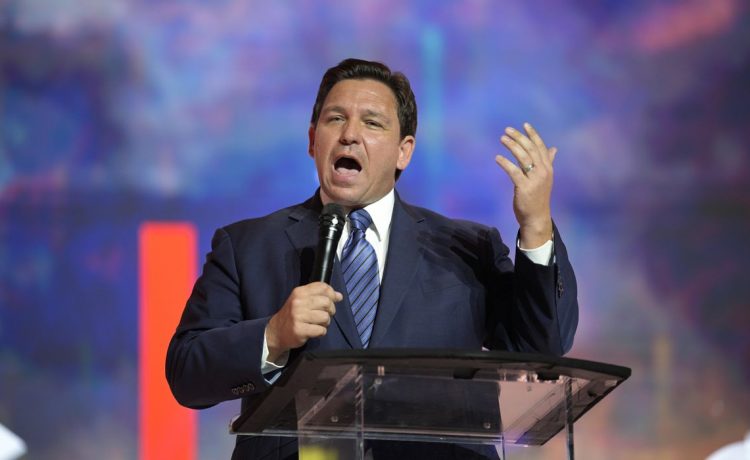 A group laboring to draft Ron DeSantis for a presidential run is building a valuable contact list that the Florida governor could mine for donations if he runs in 2024.

The only problem is it may not be legal.

The Federal Election Commission is deadlocked on whether the Ready for Ron political action committee can provide the Florida governor a growing list of emails and phone numbers the group has been collecting since May in hopes of convincing Mr. DeSantis to launch a 2024 White House bid.

The FEC left the matter in legal limbo when commissioners voted 3-3 earlier this month on whether Ready for Ron can provide the list to Mr. DeSantis, either at any point before he was considering a run for president or after declaring his candidacy.

The group likens itself to “Ready for Hillary,” a political action committee that raised money ahead of Hillary Clinton’s decision to run for president in 2016. Mrs. Clinton obtained access to the donor list “Ready for Hillary” compiled and, under the law, was supposed to pay fair market value. Politico reported at the time that an anonymous Democratic source said the Clinton campaign got the list “through a swap with another independent group.”

But unlike the Clinton model, Ready For Ron wants to directly provide Mr. DeSantis with a free list of potential donors, which the group is describing as a petition urging Mr. DeSantis to run and not a mailing list.

The group said they believe they can provide the list at no cost because Mr. DeSantis has not given any official indication he’s “testing the waters,” which is an FEC term describing preliminary steps a person takes when deciding whether to become a candidate.

The group is collecting about 1,000 new contacts each day and is on track to acquire 60,000 signatures, accompanied by emails and phone numbers, by the end of September, said Dan Backer, a legal adviser to Ready For Ron.

The goal is to collect one million contacts and provide Mr. DeSantis with a list big enough to convince him to run for president, even while former President Trump’s own potential White House run looms over the political landscape.

“We want to build a grassroots movement that is telling him, hey, we want you to run for president, you’re the guy to beat Biden,” Mr. Backer told the Washington Times.

Mr. DeSantis has risen to become a national political figure by advancing a conservative agenda in the Sunshine State while bucking the far-left policies of the Biden administration and Democrats, most prominently Covid-related mandates and lockdowns.

For now, Mr. DeSantis is running for a second term, leading his Democratic opponent, Rep. Charlie Crist, by about 7 points in recent polls.

His campaign said that it is not affiliated with Ready for Ron and none of the money donated to the PAC is given to Mr. DeSantis.

Mr. Trump has not declared he’ll run a third time for the White House but hints regularly that he’ll be a candidate.

In a sign he considers Mr. DeSantis a threat, Mr. Trump has derided him privately from his Mar-a-Lago mansion in Palm Beach, Florida.

Democrats are worried about Mr. DeSantis and his 2024 ambitions.

President Biden was scheduled to hold a rally in Florida this week, despite losing the state in 2020, where he planned to denounce Mr. DeSantis as an “extremist” Republican. The event has been postponed because a hurricane is forecast to hit the west coast of Florida later this week.

A YouGov poll released at the end of August found Mr. DeSantis tied with Mr. Biden in a hypothetical national matchup.

Mr. Backer believes the three Democrats on the FEC want to stand in the way of Ready for Ron because they want to block Mr. DeSantis from becoming a threat to Mr. Biden.

Lisa J. Stevenson, acting general counsel for the FEC, advised the commission that Ready for Ron “may not provide Governor DeSantis with the list of over 58,000 signatories’ names and contact information because the value of the list would exceed the [$2,900] contribution limits of the Act and Commission regulations.”

The FEC is expected to meet again in the coming weeks to consider more narrowly whether Ready for Ron can provide the list before Mr. DeSantis is officially “testing the waters” of a presidential run, through an exploratory committee or other means.

But as long as the FEC remains deadlocked, it cannot easily take action against Ready for Ron for turning over the list to Mr. DeSantis at some point before he became a presidential candidate.

Hans von Spakovsky, a former FEC commissioner who is now a senior legal fellow at the conservative Heritage Foundation, said the law remains vague when it comes to providing something of value to individuals who have not yet declared candidacy for office and who have not taken formal exploratory action.

“I don’t fault the commissioners for not being able to decide on this because the law really is murky,” Mr. von Spakovsky said. “There are no hard and fast rules on this.”

Mr. Backer said Ready for Ron will continue to build the list through television and online advertising and plans to roll out in the next few weeks a plan to build a national volunteer network of people for a campaign infrastructure in every state if Mr. DeSantis decides to run.

“Look at Florida and how great things are here. Look at this guy’s record,” Mr. Backer said. “And you know what? This is the guy that’s going to be able to beat Biden. He is our guy.”