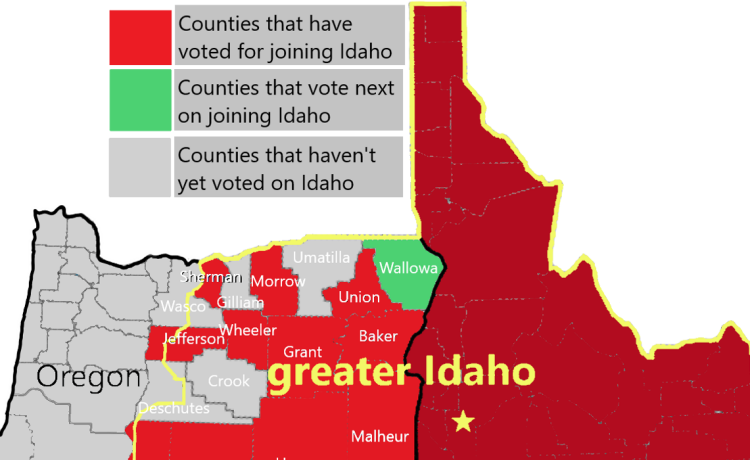 Skeptics have long dismissed the Greater Idaho movement as half-baked, but the plan to split Oregon’s rural eastern counties from Portland and fold them into the famous-potatoes state is only picking up steam.

Oregon state Sen. Dennis Linthicum, a Republican, introduced this week Senate Joint Memorial 2, a measure inviting Idaho officials to “begin discussions regarding the potential to relocate the Oregon/Idaho border,” the first time such a bill has been brought before the legislature.

Whether Oregon Senate President Rob Wagner will give the measure a hearing in the Democrat-controlled chamber is another question.

So far, Oregon Democrats have shown zero interest in relinquishing to Idaho the 15 eastern counties, which make up 63% of the state’s land mass and 9% of the population. But advocates argue that the proposed solution to the state’s gaping urban-rural divide has become impossible to ignore.

“It’s exciting. We’re making huge strides and a lot of progress,” Greater Idaho spokesperson Matt McCaw told The Washington Times. “Two years ago, we only had about three counties that had approved measures and people thought, ah, that will never happen. But people like this idea. They think this solution makes sense, so it’s exciting to see our elected leaders picking it up and moving it forward.”

Pressure to consider the issue is building in rural Oregon, where residents have long accused the state legislature of dismissing their concerns while doing the bidding of the left-wing population center of Portland.

Greater Idaho scored victories in November as 61% of voters in Morrow County and 59% of voters in Wheeler County approved ballot measures related to moving the state line, meaning that 11 of the 15 counties are now on board.

That number could soon rise to a dozen. Greater Idaho announced Wednesday that the Wallowa County Clerk has placed a question on the May ballot calling on the board of commissioners to consider the issue.

The measure calls for the board to meet at least twice a year to “discuss how to promote the interests of Wallowa County that would be relevant to a relocation of state borders, and to prepare the county for becoming a county of another state.”

Meanwhile, Oregon Democrats lost their supermajorities in both the state House and Senate in November, while Democrat Tina Kotek eked out a narrow victory for governor over Republican Christine Drazan despite winning just seven of the state’s 36 counties.

Last month, Ms. Kotek launched her One Oregon listening tour, committing to visit every county in the state at least once during her first term. She started with two largely rural southern Oregon counties that she lost in November.

Even so, supporters of the Oregon-Idaho border shift are less than optimistic about the state legislature’s commitment to focusing on the concerns of rural Oregonians.

“All of the gubernatorial candidates were asked about our movement, and all of them said something to the effect of, ‘We want to keep Oregon Oregon’ and ‘We hear you, eastern Oregon,’ but we have not heard more after that,” said Mr. McCaw.

The November election illustrated the pitfalls of the eastern-western split for both sides with Ballot Measure 114, a gun-control initiative that limits access to firearms and ammunition magazines.

The measure barely passed, by 50.65% to 49.35%, after receiving strong support in Portland and strong opposition in eastern Oregon. Last week, however, a state circuit judge in rural Harney County blocked enforcement of the ballot question pending a full trial.

State borders have been modified before – Washington and Oregon tweaked their state line in 1958 to accommodate a shift in the Columbia River. But the proposal to send more than half of Oregon to Idaho would represent the largest such move since West Virginia split from Virginia during the Civil War in 1863.

The process isn’t easy. Both state legislatures and Congress would need to approve a border relocation. Not surprisingly, Idaho has shown more interest in taking on the 15 counties than Oregon has in relinquishing them.

Idaho state Rep. Barbara Ehardt, a Republican, is expected to reintroduce a resolution this year to hold discussions on the idea after leading a joint House and Senate hearing on the idea in April.

A SurveyUSA poll released in January found western Oregon voters split on whether the rural counties should be allowed to exit, but that 68% said the state government should “look into what the effect on Oregon would be if Oregon counties became a part of Idaho, and how the transition could be done smoothly.”

Greater Idaho, also known as Move Oregon’s Border for a Greater Idaho, had previously sought to bring the southern rural counties into the fold, but changed plans after two of those counties voted against the plan.

“What that told us is that southern Oregon is not interested in having this conversation about moving the border at this time, and that’s okay, because our whole goal of our movement is to match people to the government that they want, and that matches their values,” Mr. McCaw said.

Ideally, he said, the two state legislatures would enter into talks this year about where to locate the border, then put the details in a question before the voters of eastern Oregon, which isn’t required.

“We would propose that voters would have a chance once the details are hammered out to have their say,” Mr. McCaw said.