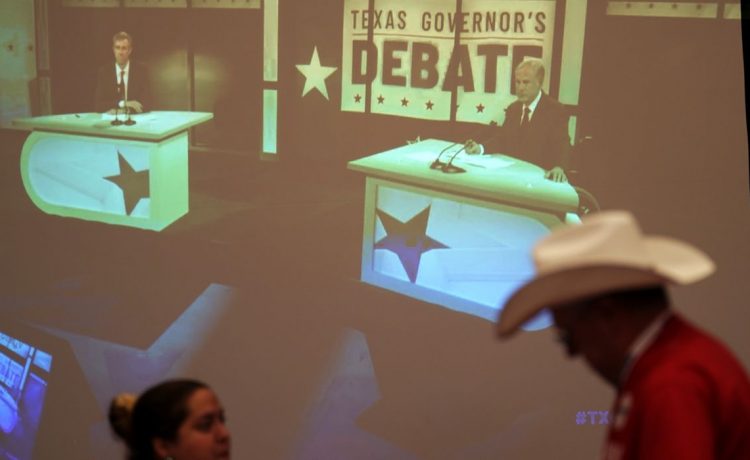 Gov. Greg Abbott on Friday said his Democratic rival Beto O’Rourke supports the “open border” policies of the Biden administration that have forced Texas to spend billions to combat the surge of illegal immigrants coming across its border and violent drug cartels flooding the nation with fentanyl.

In the first and only debate of their gubernatorial race, Mr. Abbott, who is seeking his third term, said Mr. O’Rourke, if elected, will not lift a finger to stop the Biden administration from steering the nation further away from the Trump-era policies that strengthened border security and curtailed illegal immigration.

Mr. O’Rourke, in response, said Mr. Abbott is always looking for someone else to blame for his shortcomings, including on the border, and said the Republican’s approach has failed.

“Remember this — two years ago we had one of the safest borders in decades, but under the Biden administration we have more people coming across the border than ever in the history of our country,” Mr. Abbott said at the University of Texas Rio Grande Valley in Edinburg. “Texas has responded by making sure we have the National Guard and [Texas Department of Public Safety] deployed where they are making arrests and turning back illegal immigrants.”

Mr. Abbott said they are helping localities by busing illegal immigrants to “sanctuary cities in northeastern parts of the country.”

Mr. Abbott’s Operation Lone Star, which pushes National Guard troops and state and local law enforcement into the border battle, has bused 8,100 migrants to Washington, 2,900 to New York City, and 870 to Chicago. It has also brought state charges against smugglers and some illegal immigrants, taking cases the feds decline to pursue.

“What we’re doing is making sure that we are keeping our communities safe, and this is completely different than the way things would be under Beto,” he said.

Mr. O’Rourke said no more taxpayer money should be allocated for the program, arguing it has proven to be “political theater” aimed to advance Mr. Abbott’s political fortunes, and arguing “it clearly has failed.”

“He promised that it would deter people from coming to this country,” Mr. O’Rourke said. “We’ve only seen more people come. Now they get a bus ride to Chicago or Washington, D.C., or New York. We don’t need any more stunts. We need solutions.”

“What we need is a safe, legal, orderly path for anyone who wants to come here to work with family or to seek asylum,” he said. “If you’ve come to this country, we expect you to follow the law, but on our side, we’re going to make sure that our laws reflect our values and our interests.”

Mr. Abbott hit back, saying Mr. O’Rourke could have pressed for that sort of program if he won his 2018 bid for Senate or 2020 bid for president, but said a governor has other duties.

“The job of governor is to have to deal with the chaos caused by the Biden administration and its open border policies that Beto would replicate,” Mr. Abbott said.

For Mr. O’Rourke, the debate offered an opportunity to seize momentum in the race and fulfill the dreams of Democrats and liberal activists who loathe Mr. Abbott and have relished the idea that the Texas electorate has become less conservative.

The debate featured no audience. Both men sat at tables and fielded questions from reporters.

Mr. O’Rourke said Mr. Abbott blames “everyone else” when the state falls short. Mr. Abbott, meanwhile, said Mr. O’Rourke has flip-flopped on a series of issues.

Both men accused each other of misrepresenting their records.

Mr. O’Rourke criticized Mr. Abbott’s response to the mass shooting at an elementary school in Uvalde and the energy grid failure in 2021, and chided him for supporting legislation that banned abortion as early as six weeks of pregnancy and did not include exceptions for rape and incest.

“He signed the most extreme abortion ban in America,” Mr. O’Rourke said of the Texas law that took effect after the Supreme Court overturned Roe v. Wade, the 1973 ruling that established a constitutional right to abortion.

“This election is about reproductive freedom,” the Democrat said. “If you care about this, you need to turn out and vote. I will fight to make sure that every woman in Texas can make her own decisions about her own body and own future and our own health care.”

Mr. Abbott stood his ground, saying Mr. O’Rourke has the “most extreme” stance on abortion.

“He not only supports the abortion of a fully developed child to the very last second before birth, he’s even against providing medical care for a baby who survives an abortion,” he said. “He is for unlimited abortion at taxpayer expense.”

Mr. O’Rourke and Democrats are praying he can flip the governor’s mansion.

But he has struggled to build upon the success he had in 2018 when he came within 3 points of defeating Sen. Ted Cruz, the polarizing conservative firebrand.

The Real Clear Politics average of polls showed Mr. Abbott with an 8-point lead in the race, with five weeks to go before Election Day.

Indeed, survey after survey this year has shown Mr. Abbott ahead.

Mr. O’Rourke is navigating a challenging political landscape this go-around in Texas, where President Biden’s approval rating is in the tank.

Mr. Biden’s approach to immigration, energy, and inflation has proven deeply unpopular in the deep-red border state, creating headaches for Mr. O’Rourke and other Democrats.

A Quinnipiac University poll released this week showed the biggest issues on the minds of Texas voters are the Texas-Mexico border (38 percent), abortion (17 percent), and inflation (11 percent).

The issues cut across partisan lines.

Looking to wrest away the momentum, Mr. O’Rourke launched a pre-emptive strike against Mr. Abbott before the debate.

The Democrats and parents and families of the victims in the Uvalde school shooting held a press conference to demand the governor call a special legislative session to pass new law raising the minimum age to purchase an assault weapon from 18 to 21.

The Uvalde shooter used two AR-15-style rifles that he bought days after he turned 18 to kill 19 students and two teachers at Robb Elementary.

Mr. O’Rourke, in the debate, said a majority of Texans support the proposal.

“It has been 18 weeks since their kids have been killed, and not a thing has changed in the state to make it any less likely than any other child will meet the same thing,” he said. “All we need is action, and the only person standing in our way is the governor of the state of Texas.”

“After all of these mass shootings, this governor has done nothing except make it easier for people who should not have to carry them publicly,” he said.

Mr. Abbott brushed off the attack.

Citing court rulings, Mr. Abbott said raising the age to purchase an assault weapon has proven to be “unconstitutional.”

“We want to end school shootings, but we cannot do that by making false promises,” Mr. Abbott said in the debate.

“Any attempt to try to raise the age is going to be met with that being overturned,” he said. “So we need to get to the bottom of what is really ailing our communities. And that is the mental health that is leading people to engage in school shootings and Texas is already addressing that.”