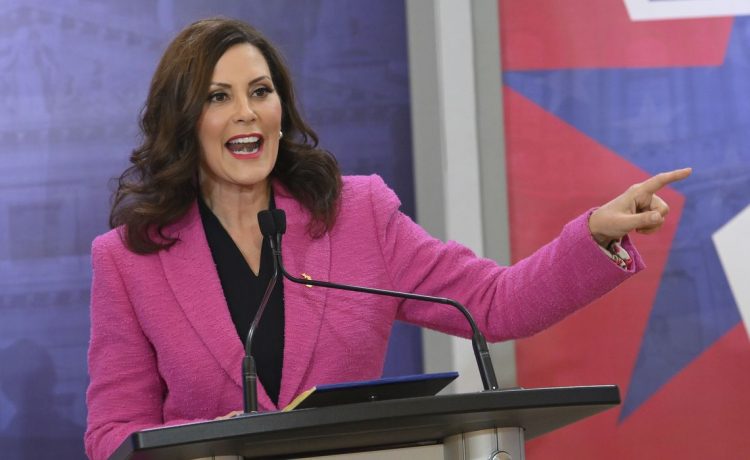 Michigan Gov. Gretchen Whitmer was slammed Wednesday for claiming during a gubernatorial debate that schools were shuttered for only three months during the pandemic, drawing attention to her much-maligned response to the COVID-19 outbreak.

Ms. Whitmer, a Democrat, sought to explain the state’s plunging K-12 test scores by pointing to the “historic challenges” during the Tuesday night debate against Republican Tudor Dixon.

“Mrs. Dixon says that I kept students out longer than any other state. That’s just not true,” Mrs. Whitmer said. “I worked closely with my Republican and Democratic governors. Kids were out for three months.”

Ms. Dixon replied it was “shocking to me that she thinks that schools were only closed for three months.”

“I’m pretty sure I just heard an audible gasp around town when Gretchen Whitmer said that kids were out of school for three months,” Ms. Dixon said. “Perhaps she wasn’t paying attention to what was actually happening. We even had schools that were closed this year.”

Ms. Whitmer said afterward that “she was only talking about closures that were the direct result of her or her health department’s orders,” according to the news site Bridge Michigan, but Republicans accused her of seeking to gaslight voters.

The Republican Governors Association said school districts in Detroit, Lansing, Grand Rapids, Dearborn and other cities shut their doors during the initial outbreak in the spring of 2020, but additional closures continued into 2021 and 2022.

“Gretchen Whitmer is once again gaslighting voters over her draconian school shutdowns that set Michigan students back a generation,” said RGA spokesperson Chris Gustafson. “Whitmer has failed to take responsibility for the educational and economic calamities that are the direct result of her orders, while students and families bear the cost.”

Jarrett Skorup, communications director for the free-market Mackinac Center for Public Policy in Midland, posted a state health department notice from November 2020 saying that high schools and colleges were closed for in-person learning, while local districts had the option of keeping K-8 schools open.

.@TudorDixon: “I’m pretty sure I just heard an audible gasp around town when Gretchen Whitmer said that kids were out of school for three months. Perhaps she wasn’t paying attention…But you know better because your students are the ones that are desperately behind.” pic.twitter.com/d1uD6zGHCn

Republican National Committee Chairwoman Ronna McDaniel tweeted: “Gretchen Whitmer is a LIAR and every parent in Michigan knows it!”

“My kids were not back in school full time for over a year. Our kids were the collateral damage of her failure to lead! Shame on her,” Ms. McDaniel said.

Bridge Michigan said in a fact-check that Ms. Whitmer ordered schools closed for the remainder of the year in April 2020, but the health department took over after that and ordered additional closures in November 2020.

“Some Michigan districts kept classrooms closed for much longer than three months, but those were local decisions made after Whitmer and the GOP-led Legislature struck a deal that gave districts flexibility to develop their own return-to-learn plans,” said the fact-check.

Ms. Whitmer, who was hotly criticized during the pandemic for the state’s shutdowns and closures, was locked in a statistical tie with Ms. Dixon in a Trafalgar/Michigan News Source poll released last week.