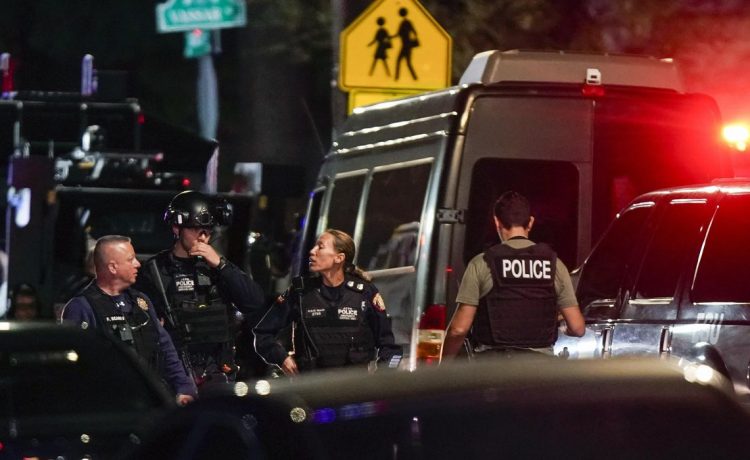 NEWARK, N.J. (AP) — A manhunt was underway Wednesday for a gunman who authorities said wounded two Newark police officers as they attempted to question him about a previous shooting.

Kendall Howard, 30, was considered “armed and dangerous,” authorities said in a news release.

The gunfire erupted Tuesday outside an apartment building in residential neighborhood about a mile west of Newark Liberty International Airport. Frightened residents were forced to remain inside as police blocked off nearby streets to search for the gunman.

One officer was shot in the leg. The other officer’s neck was grazed by a bullet that lodged in his shoulder, Newark Mayor Ras Baraka said.

The two officers returned fire and the gunman fled into the apartment building, Baraka said. But he managed to escape capture.

Police had responded about 1 p.m. after a citizen who had seen a flier about a previous shooting called in a tip about the suspect’s possible identity, according to Baraka. Police were exiting the building when they encountered the suspect in the parking lot and, during an altercation, he pulled a gun and began shooting, the mayor said.

A video taken by a bystander and posted online appeared to show someone helping an officer off the ground and soon after, others in uniform helping the limping officer into a car.

Video taken from news helicopters showed police officers in tactical gear staging on streets in the neighborhood and searching on top of and around the base of at least one multistory apartment building.

Elijah Moore was in his bedroom when he heard gunshots ring through his neighborhood. He immediately moved away from the window after hearing what he said were “a lot of shots,” possibly more than a dozen.

“I didn’t know what to do, if they were getting into my building,” said Moore, 33.

He turned on the television where he learned more about the shooting. His panic subsided minutes later, he said, when he saw police swarming his neighborhood.