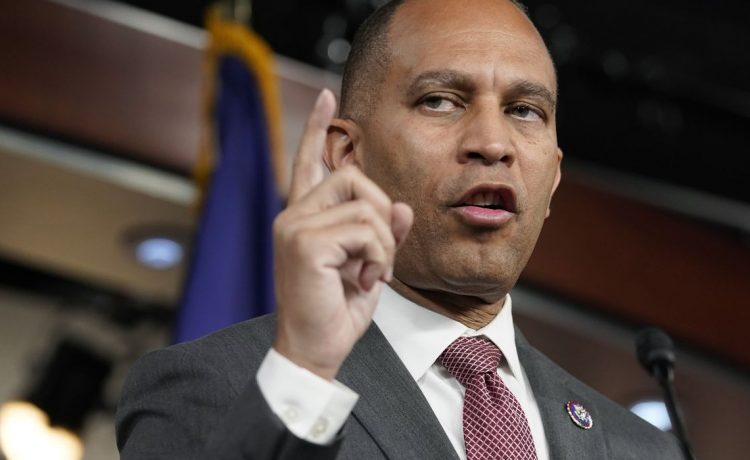 Rep. Hakeem Jeffries, chairman of the House Democratic Caucus, said accusations that he or his colleagues are for defunding the police are part of the Republican’s “big lie.”

At the same time, House Democratic leaders were considering canceling a vote on a bill to increase police funding because of opposition within the Democratic Caucus.

Mr. Jeffries, New York Democrat, nevertheless boasted that there was not a single member of his caucus who supports the defund-the-police movement.

“The notion that any of our frontline members or members of the House Democratic Caucus support defunding the police is just part of the big lie that extreme MAGA Republicans continue to tell about everything,” Mr. Jeffries said on Wednesday.

The “big lie” has been a liberal talking point often used to refer to former President Donald Trump’s unproven claims that the 2020 election was stolen from him.

While frontline Democrats have distanced themselves from anti-police rhetoric, more liberal members, including those in the far-left “Squad,” have not backed down on their calls to support defunding the police.

Due to these divisions, Democrats on Wednesday were moving to nix a plan to pass police funding and an assault weapons ban as a package.

Vulnerable swing district members have been pushing to pass police funding bills to help address a crime wave across the country and lingering criticisms about Democrats’ support for the defend-the-police movement.

The effort ran into stiff resistance from the party’s far-left wing and the Congressional Black Caucus who want police funding to include measures to hold law enforcement more accountable.

Meanwhile, the House GOP’s campaign arm is hammering the more than 70 vulnerable Democrats with allegations they harbor anti-police sentiment.

“Every Democrat voted for legislation that defunds the police through hundreds of millions of dollars of onerous and unnecessary mandates on law enforcement agencies. Democrats are the party of Defund the Police and every voter knows it,” said Mike Berg, spokesman for the National Republican Congressional Committee.