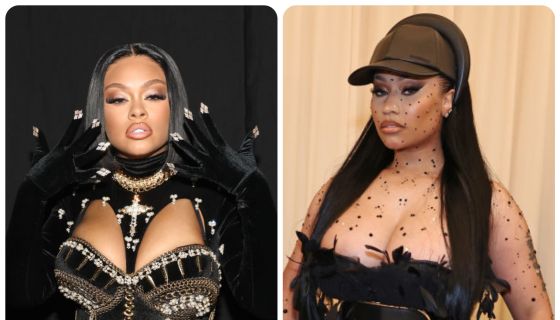 “Super freaky grandma is married AND related to f****g rapists, you ain’t gone bully me B****!”

Yet another egregiously exhausting war of words ensued on Twitter between two female rappers who traded shade for HOURSSSSSSS after one of them took issue with their Grammys consideration. The ladies went head to head in front of millions amid claims of “KARENing”, “40-year-old” bullying, mentions of rapists, and the release of texts and a phone call. 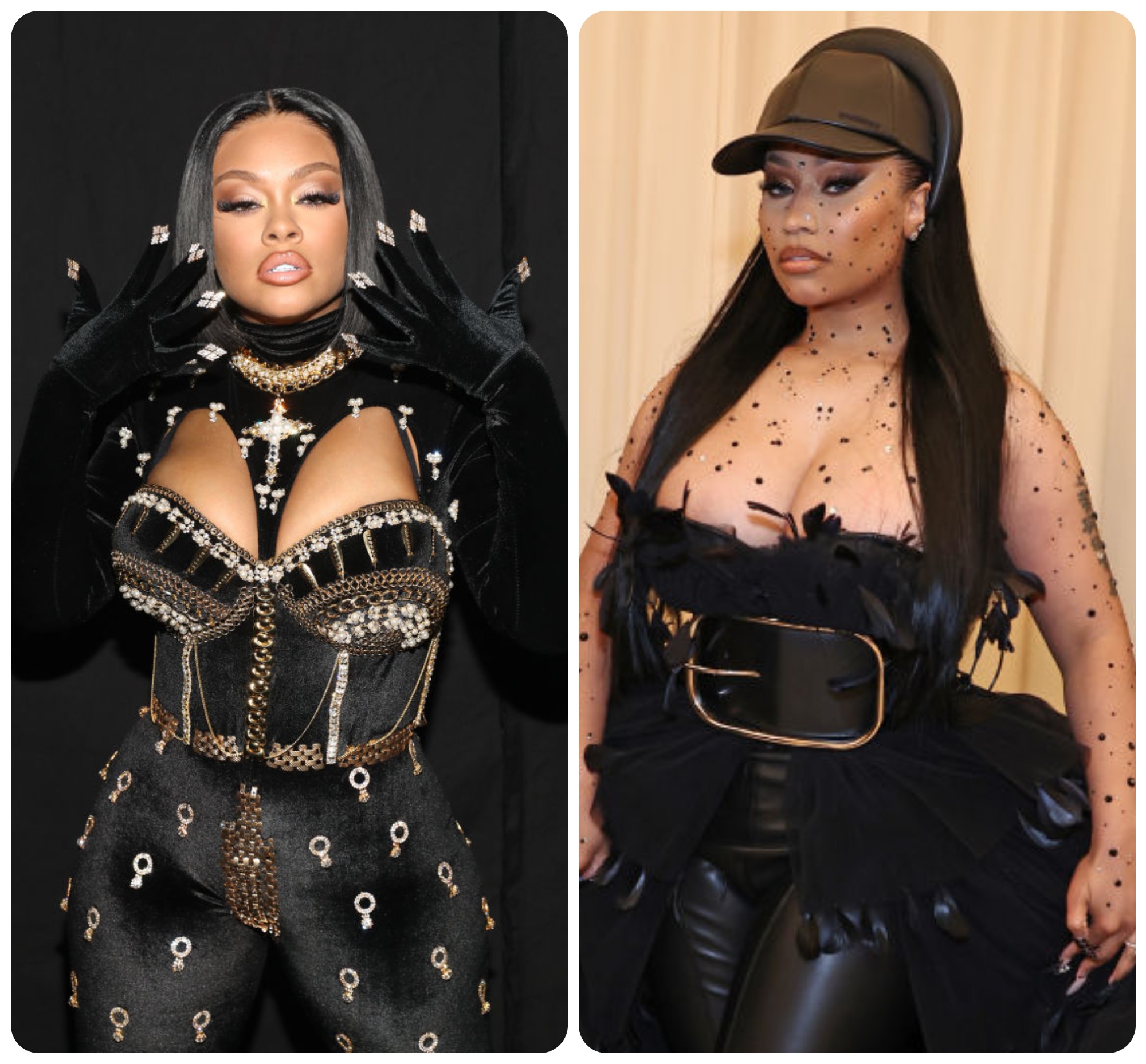 Nicki Minaj and Latto are trending topics after Nicki protested the Recording Academy moving her track “Super Freaky Girl” from consideration in the Grammys’ rap division to a pop category. According to Onika, if her track is to be considered “pop”, then Latto’s song “Big Energy” should be moved to that category as well. The rapper, 39, took to Twitter to express her displeasure with the move before the entire ordeal kicked off.

“I have no prob being moved out the RAP category as long as we r ALL being treated FAIRLY,” Minaj tweeted late Thursday. “If SFG (‘Super Freaky Girl’) has 2B moved out RAP then so does Big Energy!” she added, referring to Latto’s hit song. “ANY1 who says diff is simply a Nicki hater or a troll.”

I have no prob being moved out the RAP category as long as we r ALL being treated FAIRLY. If SFG has 2B moved out RAP then so does Big Energy! ANY1 who says diff is simply a Nicki hater or a troll. I’d actually LUV 2 c a more street record win- male OR female! IJS rightIsRight 🫡

She wasn’t finished however, she then went live on Instagram to explain her side noting that there’s a “concerted effort to give newer artists things that they really don’t deserve over people who have been deserving for many years.”

“I always say this; any rapper, female or male, that wins a Grammy, you should be f****ng proud of yourself. But why is the goalpost only ever moved when it’s Nicki? Well, I’ll tell you why. They don’t want the people that they have in the industry to go up against me.”

“If ‘Super Freaky Girl’ is pop, then so is ‘Big Energy’,” said Minaj. “If you move ‘Super Freaky Girl’ out of rap and put it in pop, do the same with ‘Big Energy.’ Right? Same producers on both songs, by the way, if you want to talk about it. So let’s keep s*** fair,” she added noting that white members of the Recording Academy wouldn’t vote for her over pop artists like Adele and Harry Styles.

Could you imagine someone telling you not to “complain” about being treated unfairly at your workplace? This is my job. I work very hard. No diff from a 9-5 where you should speak up for yourself if you know you’re a great employee & continue to be purposely sabotaged. ♥️🎀

And Barbz, there’s no need to be angry. This is simply an open discussion/healthy dialogue. Independent thinking is what makes us human beings! 😘♥️🎀

“Damn I can’t win for losing…all these awards/noms I can’t even celebrate.”

Nicki picked up the shade and things escalated further from there.

Nicki Minaj And Latto Go Head To Head On Twitter

Nicki Minaj posted a text from Latto whom she dubbed “Scratch Off” and a “Karen” where Latto agreed that the Academy shouldn’t have moved “Super Freaky Girl” to the pop category but added that “because of where we left off ion think u need to bring my name/song up.”

“This Karen has probably mentioned my name in over 100 interviews,” wrote [and deleted] Nicki Minaj. “Says she waited in line for Pink Friday w|her Barbie chain on, bangs, pink hair…but today, scratch off decides to be silent; rather than speak up for the black woman she called her biggest inspiration.”

1st of all I texted u cause I didn’t wanna do the internet sht w sum1 I looked up to. Just like the 1st time I DMed u asking about ur ongoing subtweets. I wanted to speak up cuz like I said I do agree but the way u going about it seems malicious esp. after how we left off https://t.co/e5Z9GQutGe

“Just like the 1st time I DMed u asking about ur ongoing subtweets. I wanted to speak up cuz like I said I do agree but the way u going about it seems malicious,” she added. “I’ve ignored countless subtweets since March and instead addressed u in the dm. … Ur literally older than my mom tryna be a bully @NICKIMINAJ.”

I’ve ignored countless subtweets since March and instead addressed u in the dm. You’re asking why I didn’t speak up in ur defense… it’s the same answer I gave u when u asked why I didn’t congratulate you. Ur literally older than my mom tryna be a bully @NICKIMINAJ

but Nicki wouldn’t let up.

“All this time I thought you was at least 35,” wrote Minaj.

Latto then went on a spree posting alleged receipts of Nicki’s subtweets, while Nicki issued rebuttals and started sharing DMs.

Not one to back down, Latto posted numerous times that Nicki allegedly subtweeted her to the Barbz and Nicki clapped back with “receipts” of her own.

Latto went on to share a DM from Onika.

“I literally named u as my dream collab multiple times in multiple interviews…like I told u otp I looked up to u…u still never answered my question about where the random shade started coming from,” Latto captioned the screenshot. “With all this being said this wasn’t JUST about a Grammy category. U being funny bringing me up to defend ur case knowing our last convo didn’t end on good terms. U literally told me I’m not ‘flourishing’ and no one cares about my ‘little song.’”

In the DM, Nicki mentioned Latto and an unnamed rapper that she called “big foot.” Fans believe that Nicki was referring to Megan The Stallion whom they also believe she has a looming issue with.

“You’ve shown me too much genuine love for what? To be exempt from something?” wrote Onika in the DM. “I could say the same thing but would you or big foot care? No.”

I literally named u as my dream collab multiple times in multiple interviews… like I told u otp I looked up to u… u still never answered my question about where the random shade started coming from https://t.co/DpKSKepkVQ pic.twitter.com/XNkzDBiDWw

I just know she ain’t referring to Meg as big foot?? After she got sh0t?? She is NASTY! https://t.co/KKfmIqTri9

Nicki Minaj was really in Latto’s dms calling Megan Thee Stallion “big foot”. Mind you this is a 40 year old woman who can’t rely on her husband to take her child to school/daycare in the future. pic.twitter.com/bWicckbzmz

Jelani Maraj was sentenced to 25 years to life in 2017 after being charged with repeatedly raping his 11-year-old stepdaughter and Kenneth Petty was sentenced to three years probation and a year of in-home detention for failing to register as a sex offender after he was convicted of the first-degree attempted rape of a then 16-year-old Jennifer Hough in 1995.

“Super freaky grandma is married AND related to f****g rapists,” the rapper tweeted. “You ain’t gone bully me B***! My idol turned rival now u hating!”

I’ll die on this hill by myself! Everybody ain’t lying on you! We see the pattern! BFFR!

“News Flash scratch off. I’ve never raped anyone. I’ve inspired millions. You’re one of them BOZO,” retorted Minaj before alleging that Latto didn’t care about rape while working with Dr. Luke who faced accusations from singer Ke$ha, and while working Kodak Black who also faced sex crime accusations.

“Y’all keep letting these bozos weaponize the WORD rape when they’re being dragged & not holding them accountable for not actually CARING about rape VICTIMS in REAL LIFE. They have the same 2 drags about me & one of them ain’t eem bout me. That’s how you know when you dat btch.”

“Letting people weaponize the word rape” is a crazy sentence in and of itself, but we digress.

Nicki went on to repost a Barb who hinted that Latto was a product of statutory rape.

The egregiously exhausting exchange between these two continued with Latto ultimately sharing a recorded phone call from Nicki who she dubbed a #40yearoldbully. Latto said that Nicki called her “delusional” for saying that female rappers are flourishing and said that “nobody cares about her lil song” Big Energy.

Lemme specify I’m sorry. Im delusional for saying “we’re” (newer female rappers) are flourishing & u said no one cares about my little song LYRICS my bad. FYI I only recorded cause I KNOW who tf I’m playing wit #40yroldbully https://t.co/ocBAA3uVeF pic.twitter.com/RHqEu8XFYD

The entire call from start to finish ☺️ https://t.co/paGCNjFhjz

So far it looks like things have simmered down between these two—for now at least.

EntyWAYS. Everybody go listen to one of the realest!!!! 💪🏾 https://t.co/yYLHHTkS0g

What do YOU think about the Nicki Minaj vs. Latto Twitter beef?