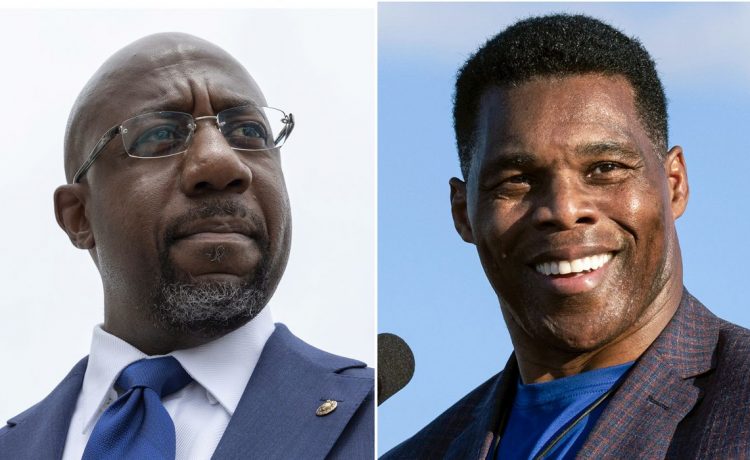 Former football star Herschel Walker fought to defy low expectations Friday in Savannah, where he and Senate Democratic incumbent Raphael Warnock took their gloves off in the state’s first and only debate.

The two candidates accused each other of slinging lies and acting desperate in order to win the seat.

Mr. Walker outperformed predictions that he would appear uninformed or unprepared. He attacked Mr. Warnock on abortion, crime, spending and his alliance with President Joe Biden, who is unpopular in the state.

“Georgia needs leaders that are going to stand up for them,” Mr. Walker said. “If we give Mr. Warnock six more years, think about what this country will become.”

Mr. Warnock also dodged a firm answer about whether he would support expanding the Supreme Court, telling moderators he would “do everything he can to protect the rights of the citizens of Georgia.”

Mr. Walker pointed across the stage at Warnock.

“When you get to Washington, you have to become a leader,” Mr. Walker said. “Being a leader, you have to make tough, tough decisions. Do you see that answer there? He really didn’t give you an answer. So my answer is no.”

Mr. Warnock, who won the seat in a 2021 special election, becoming the state’s first black Senator, accused Mr. Walker of lying about his credentials and misstating Mr. Warnock’s own positions on key issues, including a claim that he does not support law enforcement.

“We will see time and time again tonight, as we’ve already seen, that my opponent has a problem with the truth,” Mr. Warnock said.

He accused Mr. Walker of “pretending to be a police officer,” when he promoted his experience working in law enforcement. In response, Mr. Walker pulled out an honorary deputy police badge from the Cobb County Sheriff’s Department. He was told by the debate moderators no props were allowed and to put it away.

The debate gave the candidates a chance to respond to new and damaging media reports about each of them.

Mr. Walker, embroiled in a report about a former girlfriend who said he paid for her to have an abortion more than a decade ago, was asked about the claim by the moderators. He denied the charge, calling it “a lie,” and telling the audience, “People would say anything or do anything for this seat. I’m not backing down.”

Mr. Warnock did not provide a specific denial to a report in the Washington Free Beacon that Ebenezer Baptist Church, where Mr. Warnock continues to earn a salary as a senior pastor plus a $7,417 monthly housing allowance, has tried to evict low-income residents from an apartment building it owns, over past-due rent as low as $28.55.

Mr. Warnock said the accusations were “desperate” and that Mr. Walker and the GOP “are busy trying to sully Ebenezer Baptist Church.”

Mr. Warnock also dodged answering a claim by his ex-wife that he has not paid child support.

Mr. Walker pinned high gas and supermarket prices on both the Biden administration and Mr. Warnock, who he said engaged in record spending and a war on energy production.

“I”m running against him and Joe Biden because they are the same,” Mr. Walker said.

Mr. Warnock said Mr. Walker was opposed to helping Georgians obtain health care because he does not back expanding Medicaid or forcing pharmaceutical companies to lower prescription drug prices.

“Georgia needs a senator who believes, like I do, that health care is a human right,” Mr. Warnock said. “And I will continue to fight for the working class people, the folks who don’t have health care, they work every single day.”

Mr. Walker, he said, “should tell the people of Georgia why he thinks they should have expensive insulin, and why the pharmaceutical companies should be able to charge us whatever they like.”

Mr. Walker said insulin levels are impacted by diet, and Georgians are less able to buy healthy food due to inflation.

“Families are starving and they are hurting because of the bills and laws you are passing right now,” Mr. Walker said.

The two candidates are jockeying for a solid lead amid a bevy of near-even polls, and the debate was considered a pivotal event that could tip the race.

Mr. Walker, a former college football star and NFL player, came to the debate as the event underdog and amid criticism he was no match for the polished and more experienced Mr. Warnock.

Ahead of the debate, Mr. Walker lowered expectations, calling himself a “dumb country boy,” who Mr. Warnock would embarrass, while at the same time proudly touting his rural Georgia upbringing.

Mr. Walker promoted his humble beginnings as one of 12 children in public housing, not far from the debate stage.

“I know that only in America is my story possible,” Mr. Warnock said. “My family taught me the importance of hard work, and how to build the beloved community that Dr. Martin Luther King used to talk about, and I brought that spirit to the Senate.”

Mr. Walker said it was clear who each candidate supports.

Republicans and Democrats each claimed victory after the debate.

“Tonight’s debate showed who Raphael Warnock truly is: a relentless leftist whose support of the Biden agenda has given us 40-year high inflation, skyrocketing violent crime, a crisis on our southern border and a world that is less safe,” Georgia Republican Party Chairman David Shafer said.

“There wasn’t a single Georgia voter watching this debate who thinks Herschel Walker is ready to represent their state in the Senate,” Democratic Senatorial Campaign Committee spokesperson Amanda Sherman-Baity said.