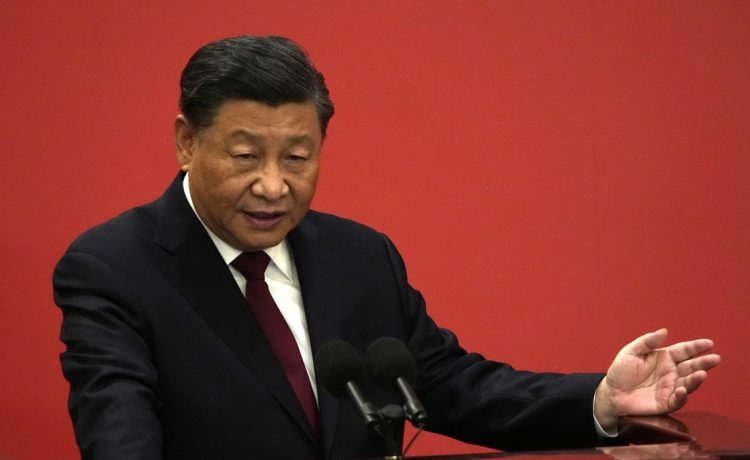 China is increasing plans for military, economic and political warfare against Taiwan and the U.S. government needs to step up preparations and planning to respond to a future war across the Taiwan Strait, according to a new report by a congressional China commission.

The report from the bipartisan panel argues that China under President Xi Jinping this year has “adopted a significantly more aggressive stance toward Taiwan, ramping up displays of military force in addition to diplomatic and economic coercion.”

Beijing’s leaders also are drawing lessons from Russia’s war in Ukraine, with an eye toward the forcible unification of Taiwan with the mainland.

“Russia’s war against Ukraine has galvanized the international community and heightened concerns over a potential Chinese invasion of Taiwan,” states the annual report of the U.S.-China Economic Security Review Commission made public Tuesday.

The commission called on Congress to create an executive branch panel to prepare economic sanctions that can be imposed on China following military action against the democratic-ruled island state. The congressionally chartered panel also wants Congress to require the Pentagon to produce a classified report on the U.S. military forces needed to resist a Chinese attack on Taiwan.

Money will also matter: Congress should also authorize “significant additional multi-year defense funds” so the military is better prepared for a future China-Taiwan war, the 12-member commission of experts said.

“While not addressing a specific timeline for a potential Chinese invasion attempt, the report certainly underscores the need for urgent action,” said Mr. Schriver, a former Pentagon and State Department China policymaker. “We therefore recommend ways to support [U.S. forces] through multi-year funding for the most applicable capabilities and expedited joint planning to optimize a potential U.S.-Taiwan response to [People’s Liberation Army] threats,” he said.

The dire warnings come even as President Biden said this week after meeting Mr. Xi said there currently are no signs China is preparing for an immediate attack on Taiwan and appeared intent on lowering the friction in the U.S.-Chinese relationship.

Mr. Biden earlier vowed on four occasions that the United States would defend Taiwan with military force in the event of a Chinese attack. The White House later said the comments reflect long-standing U.S. policy toward Taiwan outlined in the 1979 Taiwan Relations Act.

The administration’s Indo-Pacific strategy explicitly states the United States will “defend our interests, deter military aggression against our own country and our allies and partners—including across the Taiwan Strait.”

U.S. military commanders and intelligence officials warned in recent congressional testimony and speeches that China is preparing for war against Taiwan — either a military invasion or naval blockade — by the end of the decade or sooner. Last month, Secretary of State Antony Blinken said China’s plans for taking over Taiwan are advancing on “a much faster timeline” than earlier projections.

Taiwan, formally known as the Republic of China, is an island nation located about 100 miles off the southeastern Chinese coast. It broke with the mainland in 1949 after Nationalist forces fled there during a civil war.

Mr. Xi has pledged that China will soon retake the island as part of his policy of national rejuvenation, and does not rule out military action if necessary.

The 630-page report includes new details of military preparations for what Beijing is calling the central element of national rejuvenation for the Chinese Communist Party. Chinese leaders, the commission said, are closely studying the Ukraine war for lessons that can apply to an assault on Taiwan.

The U.S. government is strengthening economic and security ties with Taiwan, in an effort to help bolster its defenses to discourage a potential attack. The Biden administration is also seeking to shape Taiwan’s defenses with asymmetric warfare arms that would allow a weaker military to better confront a massively expanding PLA.

China is also accelerating a multipronged campaign of coercion against Taiwan diplomatically, the report said. Both military and economic coercion by Beijing increased sharply following the August visit to Taiwan by House Speaker Nancy Pelosi, the first sitting U.S. House speaker to visit the island in 25 years.

China responded with large-scale war games that encircled the island and missile firings that flew over the island. Some of the missiles landed in Japan’s exclusive economic zone. The report described the war games as “unprecedented in sale and proximity” to Taiwan, with exercises that included combat drills that could be used in a blockade or invasion in six zones around the island.

“The PLA also continued to train its force for a wartime campaign against Taiwan, though U.S. officials assessed there were no indications of an imminent attack,” the report said.

The August war games included the use of DF-15 short-range ballistic missiles, which are optimized for land targets rather than the use of anti-ship missiles used in simulating attacks on ships. Another key indicator of a coming conflict outlined in the report involves strategic messaging by the Chinese Communist Party that was increasingly bellicose and uncompromising.

The U.S. government rejected the statement and said the strait remains international waters.

Additionally, Chinese Ambassador to the United States Qin Gang told National Public Radio in January that if Taiwan’s government continues down a path of independence, “it most likely will involve China and the United States, the two big countries, in a military conflict.”

The Biden administration is now seeking to actively deter a Chinese attack through increased engagement announced by Mr. Biden this week. Key U.S. allies, including Australia, Japan, South Korea, and Britain, have indicated they would join a U.S. military defense of Taiwan.

Taiwan is also stepping up purchases of U.S. defensive arms and boosting defense spending and civil defenses and working to curb Taiwanese business investment on the mainland.

Another sign of concern are recent statements by Chinese officials that hardened Beijing’s posture toward a peaceful unification, the report said.

For example, a Chinese government white paper made public in August said Beijing’s plan for unification under the so-called “one country, two systems” no longer includes earlier offers of government autonomy, the report said.

“The omission of the promise not to dispatch mainland troops leaves open the possibility that the PLA might occupy Taiwan for an extended period of time as Beijing roots out those it deems separatists who cannot be brought into the fold of a unified society,” the report said.

Frequent intimidating PLA operations around Taiwan sharply increased after the Pelosi visit with 1,286 warplane flights near the island between January and Oct. 6, the report said. The largest number, 339 flights, took place in early August.

However, the report warned that many of the weapons purchased or sought by Taipei are being delayed, as arms like Stinger anti-aircraft missiles have been sent to Ukraine.

“The diversion of existing stocks of weapons and munitions to Ukraine and pandemic-related supply chain issues has exacerbated a sizable backlog in the delivery of weapons already approved for sale to Taiwan, undermining the island’s readiness,” the report said.