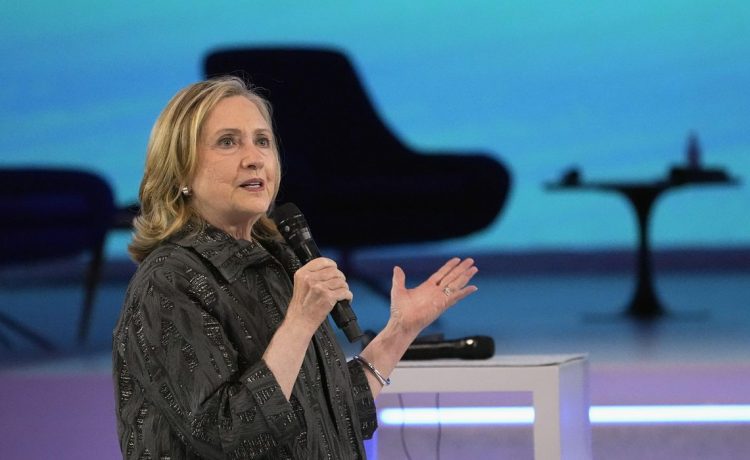 Former Secretary of State Hillary Clinton said she has no plans to leave Twitter even if former President Donald Trump returns to the social media platform.

Mrs. Clinton was a guest on SiriusXM’s Mornings with Zerlina Thursday, where she talked with host Zerlina Maxwell about the prospect of Mr. Trump, her 2016 presidential opponent, returning to Twitter since Elon Musk purchased the social media site.

“Oh, I don’t think I’ll quit. At least for that reason. I think that it’s not easy, but we have to be present in these echo chambers, these information ecosystems, in order to compete in the marketplace of ideas,” she said.

Mrs. Clinton made the remarks in the wake of some celebrities and other notable figures announcing they were leaving the social media site since Mr. Musk purchased it for about $44 billion.

Mr. Trump, who holds an interest in the Truth Social social media platform, has not revealed whether or not he plans to return to Twitter if the site makes his account active again.

Mr. Musk has said Twitter will be a free-speech platform but promised advertisers it will not become a “hellscape,” and a content moderation council will be formed to handle people who repeatedly violate the platform’s rules.

However, Mrs. Clinton wants those who “incite violence” to be prohibited from using platforms like Twitter. Mr. Trump was banned by Twitter’s previous management following the Jan. 6, 2021 riots, when his supporters breached the Capitol.

“It’s not easy, and, you know, I don’t think people who incite violence should be allowed onto privately owned media platforms. But we’ll see how that unfolds,” she said.

Mrs. Clinton was recently tagged by Mr. Musk in a now-deleted Tweet of his when he shared a link to an unfounded story suggesting that Paul Pelosi, husband of House Speaker Nany Pelosi, met his violent assailant, Paul DuPape, at a gay bar before he was attacked at the Pelosi’s San Francisco residence.

She wrote, “It is shocking, but not surprising, that violence is the result. As citizens, we must hold them accountable for their words and the actions that follow.”

Mr. Musk responded to Mrs. Clinton’s tweet, “There’s a tiny possibility there may be more to this story than meets the eye.” The tech billionaire later deleted the tweet after widespread criticism.