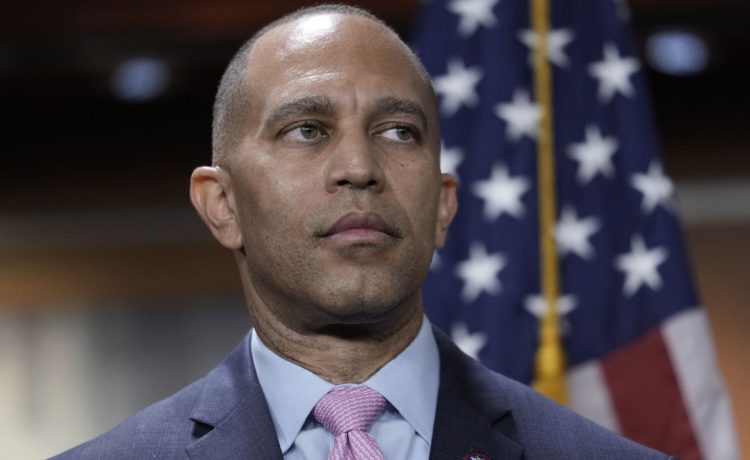 Rep. Hakeem Jeffries, who House Democrats elected to succeed Nancy Pelosi as party leader, made clear when he takes over in January that he isn’t going to let the far-left flank, or any other faction, rule the caucus.

The 52-year-old Jeffries, now entering his second decade in Congress representing a New York district encompassing parts of Brooklyn and Queens, has inherited from Mrs. Pelosi a smaller, divided caucus following a midterm election that showed key voters had soured on some of the policies promoted by the party’s most liberal faction.

Veteran Democrats say Mr. Jeffries is well positioned to manage divisions in the ranks and, in particular, members of the ultra-liberal “Squad” who promote views that included defunding the police, implementing drastic green energy policies and passing massive social welfare spending, often at odds with the rest of the caucus.

“I couldn’t think of a better person who could manage that relationship,” said Rep. Bennie Thompson of Mississippi. “He gets along with every faction in the body. They all supported him. So he comes bringing credibility to the discussion.”

While a red wave never materialized in the Nov. 8 elections, in swing districts, far-left ideas such as defunding the police likely cost Democrats the majority, and Mr. Jeffries is aiming to quickly win back enough seats to escape what he calls the “temporary” minority and become the nation’s first Black House Speaker.

In the meantime, he sent a public message to the rank-and-file that the caucus won’t be ruled by the demands of “Squad” leader Rep. Alexandria Ocasio-Cortez, who once plotted to oust him from office, and other far-left superstars, on his watch.

SEE ALSO: House Democrats call for bipartisanship in next Congress as GOP preps for majority

“Everybody matters,” Mr. Jeffries said when asked about the simmering intraparty divisions.

Mr. Jeffries gave a shout-out to the various political factions that make up what will likely be a caucus of around 213 Democratic lawmakers when the new Congress convenes on Jan. 3.

No single group will hold outsized sway with him, Mr. Jeffries, who is a member of the Progressive Caucus, said.

“That’s what makes the House Democratic Caucus the most authentic representatives of the American people,” he said. “Sometimes we can have noisy conversations, but as we show time and time again, on issue after issue after issue, at the end of the day we always come together, find the highest common denominator and get big things done for everyday Americans.”

Without the gavel, Mr. Jeffries will be relegated to governing the opposition. It will give him time to sharpen his leadership skills after serving as caucus chairman, the number-five Democrat, for the past four years.

Mr. Jeffries will take on the role of Minority Leader as Mrs. Pelosi and Rep. Steny Hoyer, the No. 1 and No. 2 Democrats, step aside after two decades in charge.

Mrs. Pelosi was known for deftly handling the Squad, made up of Ms. Ocasio-Cortez and a handful of other relatively new House Democrats who have not only made waves with ultra-liberal proposals and massive social media audiences but have also provoked criticism and, in some cases, rebukes for anti-Israel and anti-Jewish commentary.

Mr. Jeffries will have to develop his own strategies for dealing with Ms. Ocasio-Cortez, 33, and other squad members.

Ms. Ocasio-Cortez represents New York’s 14th Congressional District, which encompasses parts of Queens and the Bronx and is just a few miles from Mr. Jeffries’ 8th District. In 2018, her first year in Congress,  she plotted to find a primary opponent to oust Mr. Jeffries as part of an effort to throw out incumbent Democrats deemed too moderate.

The primary challenge never materialized, and Ms. Ocasio-Cortez said Thursday that “it remains to be seen” if Mr. Jeffries will be an ally to the causes of the ultra-liberal wing of the caucus.

The two had “an introductory meeting,” Ms. Ocasio-Cortez said, that served as “a step forward” in their relationship.

Mr. Jeffries will have to lead a caucus that is subject to sharp political shifts from an increasingly ambitious, ultra-liberal base and Ms. Ocasio-Cortez isn’t backing down.

“It’s going to be on the caucus’s now-nominated leader to determine what his stance toward progressives will be,” she told reporters.

Mr. Jeffries will have help from current Majority Whip Jim Clyburn, 81, who is sticking around next year in the Democratic leadership hierarchy to mentor Mr. Jeffries.

And he’s already won praise from squad members who are particularly pleased a Black lawmaker will become the head of a political party in Congress for the first time in history.

Mr. Bowman said he isn’t worried Mr. Jeffries will govern far from the far left, pointing out his membership in the progressive caucus and that he represents a liberal New York City district.

“He’s very well aware that the progressive agenda is America’s agenda,” Mr. Bowman said. “So we’re going to do everything in our power to move that forward, collectively, and hold each other accountable and make sure we’re responding to the needs of the American people.”

Mr. Jeffries was a corporate lawyer for Viacom and CBS before he jumped into politics in 2007, winning election to the New York State Assembly, where he served for five years. He was elected to the House in 2012 after defeating fellow Democrat Edolphus Towns in the primary.

Republicans wasted no time defining Mr. Jeffries as a member of the radical left, while popular conservative talk show host Mark Levin reminded listeners Mr. Jeffries is the nephew of former City University of New York professor Leonard Jeffries, who once taught about the role of Jews in the slave trade.

Mr. Jeffries has never been associated with the views of his uncle and has stuck to promoting equal treatment of ethnic groups in his diverse district.

Senate Minority Leader Mitch McConnell, in an unusual barb fired from across the Capitol, called Mr. Jeffries an “election denier” for saying the 2016 election was illegitimate and that Donald Trump was “a FAKE president in the Oval Office.”

Mr. Jeffries was among the House Democrats who argued before the Senate to remove Mr. Trump from the White House after the Jan. 6, 2021, riot at the U.S. Capitol that erupted after Mr. Trump called the 2020 election stolen.

“It has been one of the big unfortunate ironies of the past several years,” Mr. McConnell said. “Many of the same individuals and institutions on the political left have spent the years 2017 through 2020 yelling about the importance of norms and institutions have themselves not hesitated to undermine our institutions when they’re unhappy with the given outcome.”

Mr. McConnell’s attack may offer a preview of how Republicans plan to work with Mr. Jeffries, who despite being in the minority is poised to play a negotiating role on important legislation, including must-pass spending bills.

Mr. Jeffries said he’s willing to “extend the hand of partnership” to Republicans to pass legislation but said Democrats “will also push back against extremism whenever necessary.”

• Ramsey Touchberry contributed to this report.