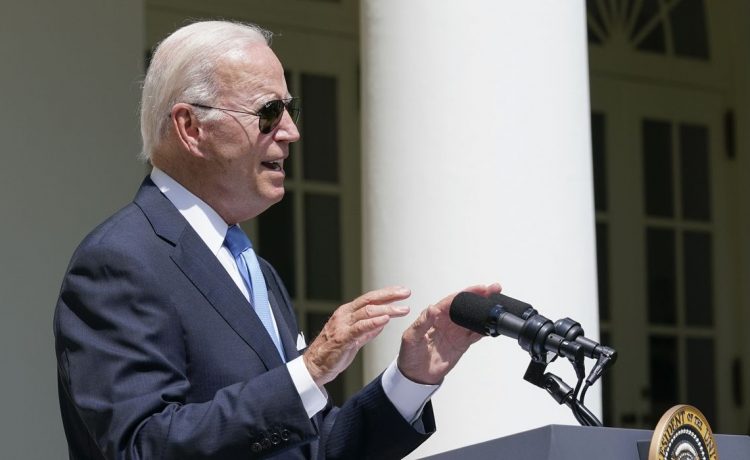 House Democrats agree with most of their party voters who say President Biden should consider stepping aside and allow another nominee to run in 2024.

Congress is preparing to recess for six weeks starting in August, and the lawmakers have less than 100 days before the November midterm elections. A new CNN poll released Wednesday found that 75% of Democrats said they want someone else as the Democratic presidential nominee in 2024, while 25 percent chose Mr. Biden.

“I think there’s some inevitability to that,” a longtime Democratic lawmaker told The Washington Times.

The CNN poll had 1,002 respondents, and the survey had a margin of error of 4 percentage points.

The same question was asked at the end of last year by an NPR/PBS NewsHour/Marist pollster, and 41% of Democratic respondents believed that Biden was the best Democratic candidate for the next election, while 41% wanted “someone else.” Another 18% were unsure.

When asked about the poll at the daily briefing on Wednesday, White House press secretary Karine Jean Pierre, responded that they are “not worried about polls.”

“The president has said has been clear that he intends to run. But we are so far away from that time from, you know, even being close to be thinking about that.”

Mr. Biden, an octogenarian who has been fending off this type of speculation over his reelection prospects since his polling and the economy has spiraled downward, is criticized by Democrats for being too old and unable to competently message and deliver wins for his party.

“The stress of the office and running at 82. I don’t think that’s realistic,” a veteran Democratic lawmaker said of Mr. Biden.

Other Democratic lawmakers say their support for Mr. Biden depends on who is running in 2024.

Former President Donald Trump has yet to announce his intentions to run for another term but has dropped strong hints he is getting closer to a decision, and California Gov. Gavin Newsom appears to be testing the Democratic primary waters to carry on the mantle for Mr. Biden after this term.

One Democratic source wondered aloud, “The question is does he even have command?” The source went on to say, that the conundrum Democrats find themselves in is “paralysis by analysis.”

“But how would it look if the Democrats did this after one term? It’s never been done successfully,” the source said.

The most recent failed attempt was tried more than 40 years ago by Sen. Ted Kennedy of Massachusetts when he challenged President Jimmy Carter in the Democratic primary.

Other Democratic lawmakers who have been asked on record their thoughts about whether Mr. Biden should run in 2024 avoided the question entirely.

“I don’t want to get into any of that,” said Rep. Steve Cohen of Tennessee. When asked about Mr. Newsom’s apparent interest in becoming the Democratic presidential nominee for 2024, he replied, “Kimberly Guilfoyle would know more about that than I do,” referencing Ms. Guilfoyle’s five-year marriage to Mr. Newsom while he was mayor of San Francisco.

Several Democratic lawmakers, including Rep Tim Ryan of Ohio and Rep. Jamaal Bowman of New York, have deferred to talking about their races rather than Mr. Biden.

“I’m worried about today. I’m not worried about 2024 right now,” Mr. Bowman said. “I have my own primary. We have midterm elections, and we have bills this week that we got to deal with. I’m not trying to think two years ahead.”

Rep. Hank Johnson of Georgia, however, defended Mr. Biden, whom he says he still supports for reelection in 2024.

“I think that the talk about Governor Newsom, throwing his hat into the ring as a candidate for president in 2024 is something that many involved in disinformation have been propagating in an effort to destabilize Democratic voters,” he said.

Mr. Johnson conceded that although Mr. Biden is underwater at this point in his popularity ratings, there is still a long way to go before the elections for president

“I don’t think there’s much difference between my colleagues and me in the House of Representatives on the Democratic side” on this issue, he said.