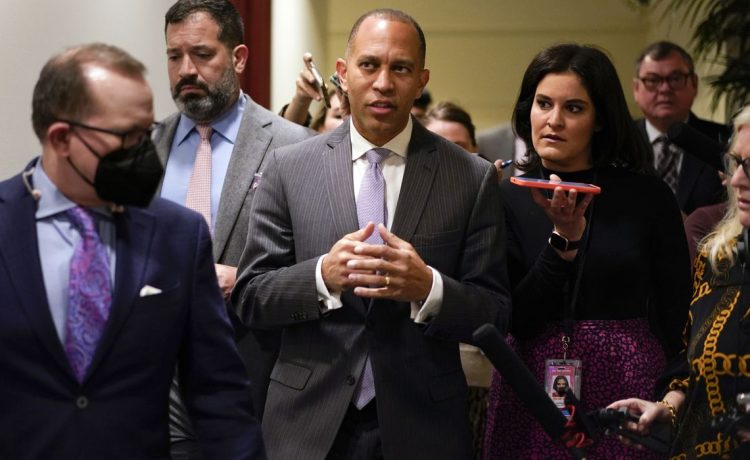 House Democrats lined up a new generation of leaders Thursday following the historic announcement by 82-year-old Speaker Nancy Pelosi that she’s stepping aside as party leader, now that Democrats have been relegated to the minority.

Party lawmakers are coalescing around 52-year-old Rep. Hakeem Jeffries of New York to take over as the top House Democrat next year under the official title of minority leader.

Mr. Jeffries currently serves as the House Democratic caucus chair, a position that puts him in charge of party messaging.

If elected by fellow Democrats, as appears likely, he’ll be the first Black lawmaker to serve in the top party leadership post.

He’s received key endorsements already, including one of the most important, from 83-year-old House Majority Leader Steny Hoyer.

Mr. Hoyer, Maryland Democrat, announced that he, too, would forgo a leadership position in the next Congress.

“Now is the time for a new generation of leaders, and I am proud to offer my strong endorsement to Hakeem Jeffries for Democratic leader, a role in which he will make history for the institution of the House and for our country,” Mr. Hoyer said in a statement. “He is a skilled and capable leader who will help us win back the majority in 2024 as we strive to continue delivering on our promises to the American people.”

Mrs. Pelosi, the nation’s first and only female speaker, and Mr. Hoyer have served in the top two leadership roles since 2003. Their departure signals a new era for House Democrats and the ushering in of a younger generation of leadership.

The shift comes after House Republicans won a bare majority Tuesday, when California’s 27th District race was called for Republican Mike Garcia. And it follows periodic unrest in the ranks of the Democratic caucus by lawmakers eager to inject younger voices in the leadership team.

“I am excited about generational change,” Mr. Raskin said. “But, it’s a melancholy day because she [Mrs. Pelosi] has been such a central figure in the struggles and the challenges of our time. She’s so sure-footed and has amazing political instincts and reflexes.”

Mr. Jeffries’ deputy is likely to be Rep. Katherine Clark, 59, Massachusetts Democrat who is running for the role of minority whip. Ms. Clark currently serves as assistant speaker, a role that Mrs. Pelosi created years ago to expand the leadership ranks.

Rep. Pete Aguilar of California, 43, is expected to win the election to replace Mr. Jeffries as caucus chair.

Democrats won’t hold their leadership elections until after Thanksgiving, but Mr. Jeffries was already garnering support to lead party lawmakers, many of whom have wanted to see younger people rise in the ranks.

“It’s time for a new generation of leadership in Congress,” said Rep. Dean Phillips, Minnesota Democrat. “Hakeem Jeffries would make a fine leader for our caucus.”

The Democratic leadership team may hold on to one octogenarian.

Rep. Jim Clyburn, 82, who is now majority whip, is running for the role of assistant to the minority leader, according to media reports.

But Mr. Clyburn’s spokesperson would not confirm Mr. Clyburn’s plans. The South Carolina Democrat gave his endorsement to Mr. Jeffries, Ms. Clark, and Mr. Aguilar to be the top three Democratic leaders.

“Speaker Pelosi has left an indelible mark on Congress and the country, and I look forward to her continued service and doing whatever I can to assist our new generation of Democratic leaders which I hope to be Hakeem Jeffries, Katherine Clark, and Pete Aguilar,” Mr. Clyburn said in a statement.

Mrs. Pelosi announced her plans to step away from the leadership in a floor speech Thursday afternoon, as a chamber packed with Democrats cheered her on with several standing ovations.

She made no mention of serving in an advisory role but that’s expected, and many Democrats who have worked with Mrs. Pelosi for decades don’t want her to simply vanish from the leadership scene.

“She’s the only leader of the Democratic Caucus I’ve had since I’ve been here, and I’m heading into 20 years,” said Rep. Emanuel Cleaver, Missouri Democrat. “It’s going to take some adjustment for all of us.”