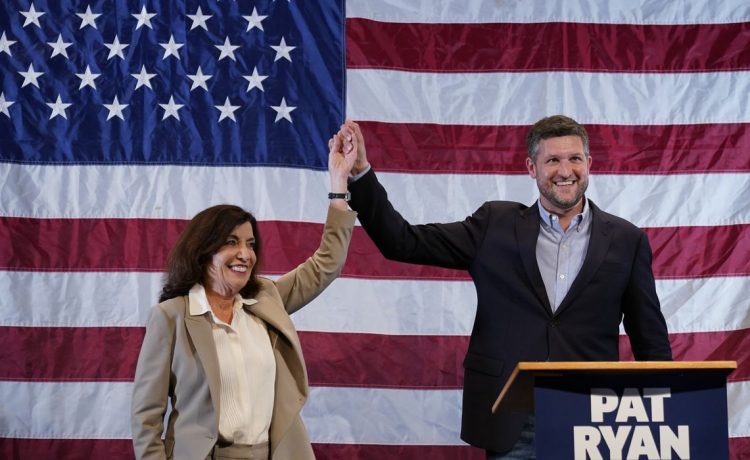 Democrats hope Pat Ryan’s unexpected win in a special election to fill a vacant House seat in New York’s 19th Congressional District is a sign that the GOP’s “red wave” will be reduced to a puddle come November.

Top analysts Wednesday downgraded the GOP outlook in the upcoming midterm election and said Democrats may even hang on to their slim majority following Mr. Ryan’s surprise win over Republican Marcus Molinaro.

The non-partisan Cook Political Report, which provides analysis of elections and campaigns, took notice of Mr. Ryan’s win and lowered its forecast for GOP gains in the House on Wednesday.

Based on “recent developments, we’ve revised our outlook to a 10-20 seat GOP gain, w/Dems maintaining control not out of the question,” said Cook Report’s Dave Wasserman.

The revision marked a drastic change from May, when Mr. Wasserman said House Republicans were on track to gain 20-35 seats.

Mr. Ryan, Ulster County executive, defeated Mr. Molinaro, the Dutchess County executive, in the race to fill the rest of the term of Democrat Antonio Delgado, who was appointed by Gov. Kathy Hochul to serve as the state’s lieutenant governor.

The district leaned Republican, and Democrats said Mr. Ryan’s unexpected win showed their voting base was energized by the recent Supreme Court decision that overturned the 1973 ruling that legalized abortion.

The GOP, Mr. Maloney said, “can say goodbye to their ‘Red Wave’ because voters are clearly coming out in force to elect a pro-choice majority to Congress this November.”

Democrats have suddenly become less pessimistic about a November wipe-out that had been forecast due partly to President Biden’s poor approval numbers and high prices at the gas pump and grocery store.

The party has been on the rebound this summer, starting with the abortion ruling that they have seized upon to energize their voting base.

On Aug. 2, voters in traditionally conservative Kansas rejected a ballot measure that would have allowed the state legislature to limit or ban abortion, and polls show voters may have more to say on abortion in November.

On Tuesday, the Pew Research Center Poll found that abortion has become a much more important issue for the majority of voters, but Democrats in particular.

Among registered voters, 71% of Democrats and Democratic-leaning voters said the abortion issue will be “very important” in their midterm vote, up from 46% in March.

Abortion access has been a top campaign issue in key swing-state elections in Arizona, Pennsylvania, Georgia and Wisconsin, where Democratic candidates are leading or tying their GOP opponents, leaving Republicans in doubt about reclaiming the Senate majority.

Mr. Biden, meanwhile, has celebrated a string of victories, including passage of a tax and spending bill that will cut prescription drug prices, fund green energy projects and extend Covid-era Obamacare subsidies.

Gas prices have dropped for 70 days in a row.

On Wednesday, Mr. Biden announced a new student loan forgiveness program that fulfills his key campaign promise of helping to alleviate student debt and is aimed at winning over younger voters in November.

“Two non-extremists in their respective parties face off in a largely suburban, sometimes exurban area, and the battle over a woman’s right to choose against government regulation. Welcome to Kansas,” veteran New York Democratic campaign consultant Hank Sheinkopf said.

New York Republicans reject that Mr. Molinaro’s loss should be looked at as an indicator for November, saying several unique factors affected the special election.

The source said the Molinaro campaign was knocking on only about 50 doors a day until a few weeks ago.

“That wouldn’t be good for a city council race or congressional race,” the source said. “There were no get-out-the-vote operations.”

The Washington Times reached out to the National Republican Congressional Committee for comment and did not hear back.