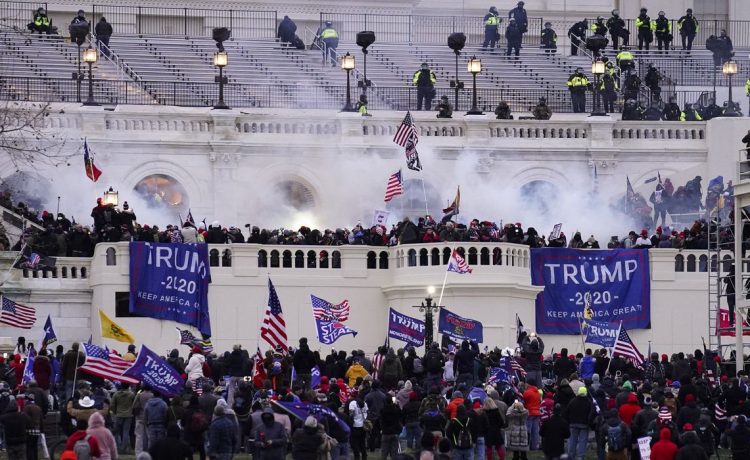 House Democrats are tying the GOP dysfunction over selecting a speaker to the 2021 Capitol protest on its second anniversary Friday.

The caucus met on the steps of the Capitol to hold a moment of silence of police officers who lost their lives or were injured amid the riot. Republican Rep.-elect Brian Fitzpatrick of Pennsylvania also attended.

“Two years to the day, the House GOP is demonstrating on the floor that they’ve learned absolutely nothing,” said Rep.-elect Jake Auchincloss, Massachusetts Democrat.

Mr. Auchincloss, who vowed after the riot not to work with any Republicans who voted to overturn the results of the 2020 election, said Republicans must choose between governing and their loyalty to former President Donald Trump and its far-right members.

The anniversary was expected to be overshadowed by the ongoing battle to either elect GOP leader Kevin McCarthy for speaker or find an alternative to appease the conservative faction opposed to him.

Mr. McCarthy has 20 defectors working with him and his allies to strike a deal on House rules and other things that could sway them, though a handful have asserted there’s little he can do to change their minds.

Mr. McCarthy, who has lost 11 ballots for speaker, needs 218 votes to get the gavel. He got 201 the last five rounds of voting.

Democrats, meanwhile, have all voted unanimously for party leader Hakeem Jeffries on every ballot.

Rep.-elect Pramila Jayapal, Washington Democrat who chairs the Congressional Progressive Caucus, said the events of Friday and two years ago are related and rooted in the extremist takeover of the Republican Party.

“What we’re seeing in terms of the chaos and dysfunction on the Republican side is also an attack on our institutions, and it comes out of six years of accepting the big lie,” Ms. Jayapal told The Washington Times.

She also refuted the idea that Democrats should engage with Republicans to find a solution that’s kept the House in limbo.

Members cannot be sworn in until there is a House speaker.

“I don’t know why we would be working with people whose agenda is to cut Social Security and Medicare or to cut health care, so I think this is up to them to figure it out, and McCarthy should step aside because he’s not going to get the votes and no one else is going to come forward until he steps aside,” Ms. Jayapal said.

Mr. Jeffries and former House Speaker Nancy Pelosi delivered remarks on the second anniversary of the riot, which was followed by a prayer and family members of officers who died in relation to the riot saying the name of their loved ones.

“One hundred and forty officers were seriously injured that day. Many more will forever be scarred by the bloodthirsty violence of the insurrectionist mob. We stand here today with our democracy intact because of those officers,” Mr. Jeffries said.

Mrs. Pelosi said, “The January 6th insurrection shook our republic to the core. For many in the Congress and across our country the physical, emotional and psychological scars are still raw,” she said. “Yet from the unspeakable horror sprang extraordinary heroism. Law enforcement heroes confronted the insurrectionists to protect the Capitol, the Congress and the Constitution.”