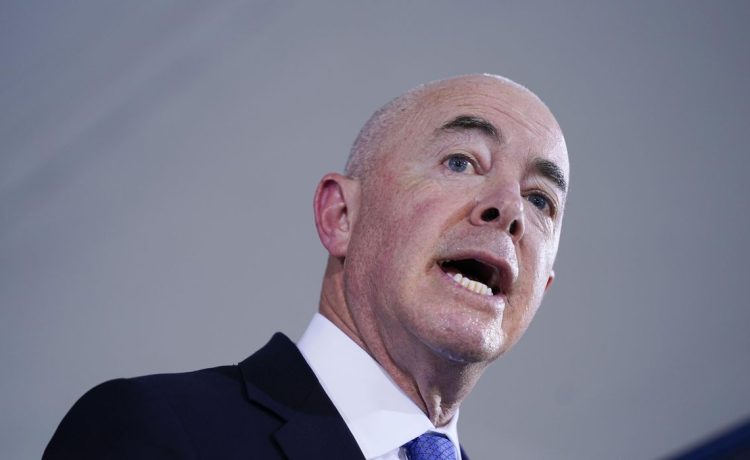 House Republicans are turning up the volume on calls to impeach Homeland Security Secretary Alejandro Mayorkas.

Rep. Andy Biggs, an Arizona Republican who has introduced articles of impeachment against Mr. Mayorkas, said Republicans must act in January to begin the process of removing the secretary from his post.

“I expect our party to pursue impeachment next Congress,” he said Tuesday at a press conference at the Capitol. “Secretary Mayorkas has committed high crimes and misdemeanors. His conduct is not incompetent. It’s not negligent. It is willful and intentional.”

Mr. Biggs was joined by more than a dozen GOP colleagues to vocalize their desire to oust Mr. Mayorkas.

The lawmakers suggest Mr. Mayorkas is intentionally creating an open border and allowing dangerous drugs such as fentanyl into the U.S.

They said the secretary lied to Congress when he declared that the border is secure.

“It’s a felony to knowingly make false statements to Congress. That is unless you work for Joe Biden,” said Rep. Kevin Hern, Oklahoma Republican and incoming chair of the conservative Republican Study Committee. “Mayorkas repeatedly claims that the border is under control and that the Biden administration is taking steps to increase security.”

Any impeachment effort would have to go through the Judiciary Committee, which will be chaired by Rep. Jim Jordan of Ohio.

Mr. Jordan has signaled support for impeaching Mr. Mayorkas, but he was notably absent at Tuesday’s press conference.

Several of the members urging for impeachment are also part of the “Never Kevin” gang of hard-right Republicans who oppose GOP Leader Kevin McCarthy’s bid for speaker.

Mr. Jordan has pledged his support of Mr. McCarthy.

Last month, Mr. McCarthy gave his blessing to Mr. Jordan and Rep. James Comer, the incoming chair of the House Oversight Committee, to investigate Mr. Mayorkas’s handling of the southern border, warning that they could lead to an impeachment inquiry.

“If Secretary Majorkas does not resign, House Republicans will investigate every order, every action, and every failure to determine whether we can begin an impeachment inquiry,” Mr. McCarthy.

Senate Republicans have mostly shrugged off the impeachment calls. In the Democratic-controlled Senate, it’s unlikely the effort would lead to Mr. Mayorkas’s removal, even if the House impeached him.

“The House has an obligation to call out the kind of malfeasance that we’ve seen out of the secretary of homeland security,” Mr. Roy said. “That’s our job under the Constitution.”