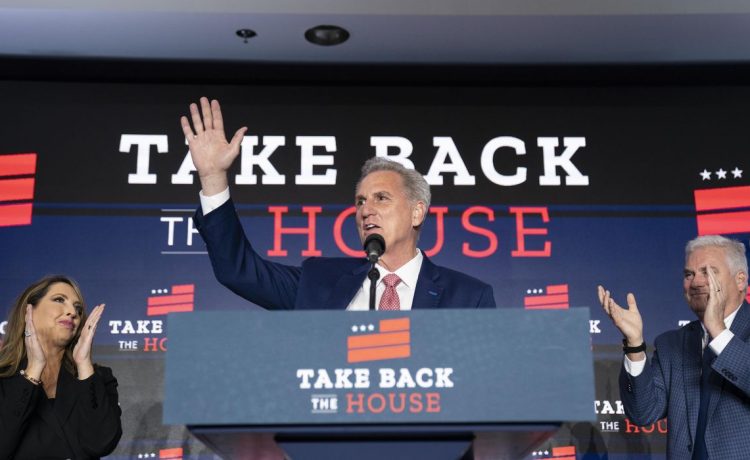 The opening day of the 118th Congress is poised to feature a historic fight on the House floor over who will serve as the next speaker under new Republican leadership that will put a halt to one-party rule and the Democratic agenda.

Across the Capitol, Senate Democrats will keep control of the majority with 51 votes, but with the House in GOP hands, will be relegated to confirming Mr. Biden’s administrative and judicial appointments.

The GOP‘s takeover of the House majority may be chaotic.

There’s no guarantee Mr. McCarthy will secure enough GOP votes to win the speaker’s gavel in a floor vote that will take place on Tuesday, the opening day of the 118th Congress.

With just days to go before the floor vote, Mr. McCarthy‘s efforts were coming up short. Nine GOP House lawmakers who were on the fence about Mr. McCarthy, said on Sunday that his concessions were “insufficient.”

Those negotiations are heating up ahead of Tuesday’s floor vote.

Other House speakers have been elected without unanimous support from their own party, including Democrat Nancy Pelosi of California and Republicans Paul Ryan of Wisconsin and John Boehner of Ohio. But the House GOP will govern with a minuscule majority of only five seats, which means a handful of rank-and-file lawmakers could thwart Mr. McCarthy‘s election.

Republicans on Capitol Hill describe Mr. McCarthy‘s chances of securing the votes as “a coin flip,” and one called the negotiations “a mess,” adding that “it’s almost like McCarthy‘s waiting to cut the deal until the last moment, which is not wise.”

Rep. Andy Biggs, an Arizona Republican, is leading the five lawmakers who say they are a hard no against Mr. McCarthy. He recently told Fox News that neither Mr. McCarthy nor any other Republican had secured the 218 votes that would be needed to win the speaker’s gavel if all seated lawmakers vote for a candidate on Tuesday.

“Maybe it will take a few ballots to shake that out,” Mr. Biggs said.

A House speaker’s election has not required multiple ballots in 100 years.

House historians have recorded 14 instances, many of them in the years after the Civil War, in which the speaker election required multiple ballots. The last occurrence was at the start of the 68th Congress in 1923, when Frederick Huntington Gillett, a Massachusetts Republican, was elected on the ninth ballot.

The five holdouts against Mr. McCarthy are demanding significant changes to the House rules that would take power away from the speaker and give more governing authority to the committees and rank-and-file lawmakers.

One demand would require reinstating a rule that would allow lawmakers a vote to replace the House speaker mid-Congress.

Mr. McCarthy has been reluctant to negotiate with the five holdouts out of concern it will embolden the group to make more demands but as of Dec. 30, was willing to agree to a rules change that would lower the threshold required for a motion to eject the speaker. Conservatives want this rule in place to give them leverage over Mr. McCarthy if he does not govern to their liking. House Speaker Nancy Pelosi made it harder for a lawmaker to bring up a motion to get rid of a sitting speaker after conservatives used the threat of it to push Mr. Boehner into retirement.

Mr. McCarthy, meanwhile, has garnered the loyal support of House GOP moderates who have pledged to vote only for Mr. McCarthy, no matter how many ballots it takes to elect him speaker.

In a letter sent Friday to the GOP conference, members of the Main Street Caucus, led by Reps. Dusty Johnson of South Dakota and Stephanie Bice of Oklahoma, wrote that they believe Mr. McCarthy is the best candidate for House speaker “and we are prepared to vote for him as long as it takes.”

The centrist lawmakers said they oppose a rules change that would allow lawmakers to more easily eject the speaker mid-Congress and pledged to reject any rules changes proposed by conservatives “if Kevin McCarthy is not expediently elected as Speaker of the House on January 3.”

Some Republicans have suggested the No. 2 House Republican, Rep. Steve Scalise of Louisiana, could become a viable alternative if the votes never materialize for Mr. McCarthy. Mr. Scalise is poised to serve as majority leader and said he backs Mr. McCarthy for speaker.

The GOP holdouts could also decide to vote “present,” which would not count against Mr. McCarthy and would lower the majority needed to win the speaker’s gavel.

An aide close to one of the five holdouts told the Washington Times that voting present is “frowned upon … but it’s definitely an option.”