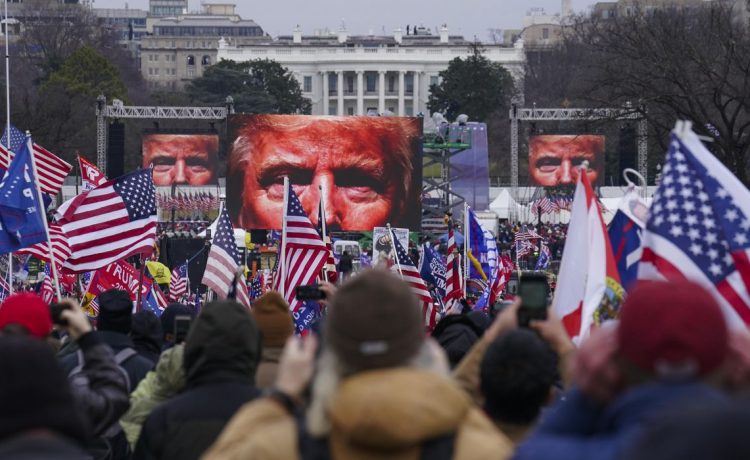 The House Jan. 6 Committee voted unanimously on Monday to urge the Justice Department to charge former President Donald Trump with four crimes for his role in the 2021 attack on the Capitol, in an unprecedented effort by Democrats that could put Mr. Trump behind bars and prevent him from seeking the presidency again.

The panel also recommended charges against conservative lawyer John Eastman, who was advising Mr. Trump and his allies on legal theories to stop the congressional certification of the election. Lawmakers said they are further recommending charges against other unnamed Trump associates.

The panel also is referring four House Republican lawmakers to the Ethics Committee for failure to comply with the panel’s subpoenas — House Minority Leader Kevin McCarthy of California, and Reps. Jim Jordan of Ohio, Scott Perry of Pennsylvania and Andy Biggs of Arizona.

Wrapping up its 18-month investigation, the majority-Democrat panel recommended that federal prosecutors pursue charges against the former president for inciting the attack on the Capitol by the pro-Trump mob, obstructing an official proceeding of Congress, conspiracy to defraud the government and making false statements on fake presidential electors.

Committee Chairman Bennie G. Thompson, Mississippi Democrat, said the committee is providing “a roadmap to justice” for prosecutors. He said the committee’s 18-month investigation requires further “accountability that can only be found in the criminal justice system.”

“He lost the 2020 election and knew it,” Mr. Thompson said of Mr. Trump. “But he chose to try to stay in office through a multi-part scheme to overturn the results and block the transfer of power.”

Rep. Jamie Raskin, Maryland Democrat, said Mr. Trump and others who plotted the attack should not go unpunished while his supporters are being prosecuted for rioting at the Capitol at his behest.

“Ours is not a system of justice where foot soldiers go to jail and masterminds and ringleaders get a free pass,” Mr. Raskin said. “We understand the gravity of each and every referral we are making today, just as we understand the magnitude of the crime against democracy that we described in our report.”

Committee Reps. Liz Cheney of Wyoming and Adam Kinzinger of Illinois, two anti-Trump Republicans who are leaving Congress in two weeks, joined all seven Democrats in approving the criminal referrals.

The recommendations mark a rare escalation by Congress against a former president for actions taken while he was in office. But the final decision to pursue charges rests with the Justice Department, which is conducting its own investigation into the Capitol riot and recently appointed a special counsel.

The former president would face up to 10 years in prison for inciting or assisting an insurrection, the most serious charge proposed by the committee, should the Justice Department decide to prosecute. The charge would bar Mr. Trump, who has announced a new bid for the White House in 2024, from holding public office again.

Ms. Cheney, the panel’s vice chair, said Mr. Trump is the only president in history who “refused his constitutional duty” to transfer power peacefully. She said it was “shameful” that Mr. Trump watched the riot unfold on TV from the White House but did nothing to stop it for hours, and called his actions “unlawful.”

“No man who would behave that way at that moment in time can ever serve in any position of authority in our nation,” Ms. Cheney said.

Mr. Trump has condemned the committee’s investigation as a partisan “kangaroo court” and said its findings were preordained. He has said the probe is intended to derail his 2024 campaign.

Conspiracy to defraud the government and obstructing an official proceeding both carry sentences of up to five years in prison.

Throughout its series of public hearings over the summer, the Democratic-led panel consistently focused on the efforts of Mr. Trump and his allies to overturn the 2020 presidential election and his role in stoking the violence at the Capitol.

Committee members have emphasized that Jan. 6, 2021, riot was part of a coup engineered by Mr. Trump when he encouraged a rally of his supporters to “fight like hell” at the Capitol to disrupt congressional certification of his loss to President Biden.

The committee capped its final hearing last month by voting unanimously to issue a subpoena demanding that Mr. Trump turn over documents and testify. The move sparked a legal battle that is likely to outlast the panel’s charter.

On Monday, during what was expected to be the committee’s final proceeding before its term expires under a Republican-led House next month, the panel also recommended charges against conservative lawyer John Eastman. He was a member of the former president’s legal team who is widely viewed as the architect behind Mr. Trump’s plan to hold on to power following the 2020 election.

Mr. Bannon has since appealed the conviction. His prison term has been delayed pending that appeal.

The committee also began releasing key details behind its final report, including an executive summary and list of witnesses who came forward throughout the investigation.

The 161-page document released Monday focuses primarily on Mr. Trump’s actions to overturn the 2020 election and what the committee said were his actions that led to the violence at the Capitol on Jan. 6.

“In the Committee’s hearings, we presented evidence of what ultimately became a multi-part plan to overturn the 2020 presidential election,” the executive summary of the final report reads. “That evidence has led to an overriding and straight-forward conclusion: the central cause of January 6th was one man, former President Donald Trump, who many others followed.”

The committee’s final report is expected to be released later this week.