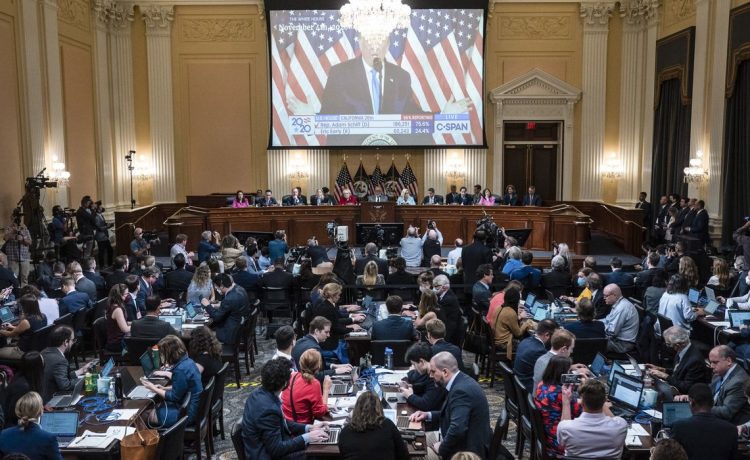 The House Jan. 6 committee honed in on former President Trump’s massive political war chest on Monday, saying he duped donors into handing over millions in campaign contributions based on his false claims that the 2020 election was stolen.

Those same funds, which the committee said were funneled into Mr. Trump’s Save America PAC, now threaten vulnerable Democrats in Congress and, observers say, could bankroll another White House bid by the former president in 2024.

“Not only was there the big lie, there was ‘the big rip-off,’” Rep. Zoe Lofgren, California Democrat and member of the committee, said at the conclusion of Monday’s hearing.

“Trump used the lies he told to raise millions of dollars from the American people,” she said. “These fundraising schemes were also part of the effort to disseminate the false claims of election fraud.”

But Democrats aren’t the only party blaming their opponents for using the Capitol attack on Jan. 6, 2021, for their partisan political benefit.

Trump backers on Twitter accused the committee of using its probe as a ploy to motivate Democratic donors.

“The U.S. House select committee’s Thursday hearing on their Jan. 6 findings is being used to drive up donation dollars for the Democratic Party going into the November midterm elections,” the Trump War Room Twitter account wrote on Monday.

In its follow-up hearing to Thursday’s prime-time debut, committee members built the case that Mr. Trump knowingly peddled false claims that the election was stolen against the advice of several campaign advisers and administration officials.

Several administration officials, campaign insiders and election experts testified to the committee that they attempted to dissuade Mr. Trump from further pursuing the claims.

Trump campaign manager William Stepien, who was scheduled to appear before the committee in person before backing out last minute due to his wife going into labor, told the committee in a recorded deposition that he urged the president against attorney Rudolph W. Giuliani’s advice to declare victory on election night.

Mr. Trump’s son-in-law, Jared Kushner, also told the committee that he told the president that calling the election was “not the approach I would take if I was you.”

Former Attorney General William Barr said in his recorded deposition to the committee, introduced Monday, that Mr. Trump latched onto claims of election fraud “right out of the box on election night” before there was any way the claims could be proven.

Mr. Barr said he worried that Mr. Trump was losing his grip on reality as he stood by his claims of rampant voter fraud in the weeks after the election.

“After the election, he didn’t seem to be listening,” Mr. Barr said of Mr. Trump.

Mr. Barr, who publicly dismissed Mr. Trump’s claims before departing the administration in December 2020 over their clash, said he told Mr. Trump repeatedly that there was no evidence of widespread fraud in the election.

Members of the panel said Mr. Trump knew the claims were warrantless, and that he used the charade to fill his coffers.

In a prerecorded video aired during the hearing, the committee’s senior investigative counsel, Amanda Wick, said the Trump campaign sent millions of fundraising emails, up to 25 per day, claiming that “the left-wing mob was undermining the election,” and called on supporters to donate to an “election defense fund,” which the committee said did not exist.

The committee said the former president has raised $250 million from the bogus claims, with nearly $100 million pouring in during the week after the election alone.

Most of those funds, the committee said, poured into Mr. Trump’s Save America PAC, an entity Mr. Trump has used to back Republican loyalists in key battleground states as Republicans fight to take back the majority in this year’s primaries.

And given Mr. Trump’s less than veiled hints that he will run for office again in 2024, the former president’s ability to capitalize on his supporters’ distrust of the election could pose a grave threat to Democrats far beyond the primaries.

In a Save America PAC fundraising email sent Monday as the committee wrapped up its hearing, Mr. Trump appealed to those “who fought alongside me from the countless Impeachment WITCH HUNTS to the Election SCAM and to now” for continued support.

“Donors deserve to know where their funds are really going,” Ms. Lofgren said during Monday’s hearing. “They deserve better than what President Trump and his team did.”