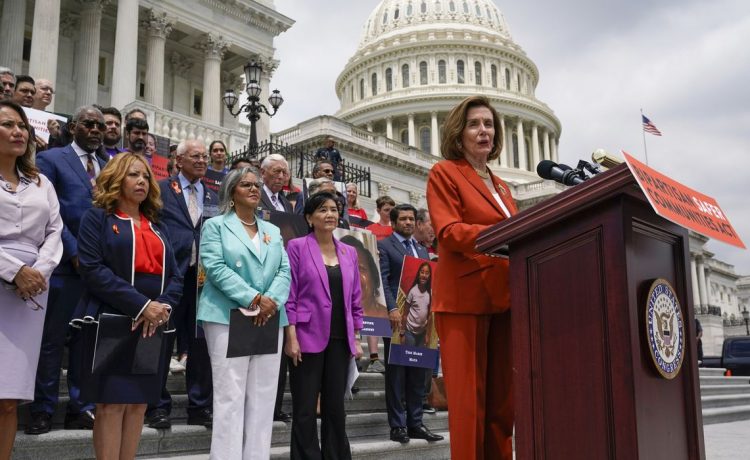 House lawmakers gave final approval on Friday to the first the nation’s first new gun laws in nearly 30 years, sending a huge victory for Democrats to President Biden’s desk with the help of Republicans.

In a 234-139 vote, the House passed a gun control bill that expands background checks to include juvenile records and incentivizes states to adopt “red flag” laws that are used to confiscate guns from people deemed dangerous by a judge.

“Every day, gun violence steals lives and scars communities — and this crisis demands urgent action,” said House Speaker Nancy Pelosi, California Democrat. “While we must do more, [this bill] is a step forward that will help protect our children and save lives.”

Overall, 14 House Republicans with nearly every single House Democrat voted to pass the bill. The GOP supporters were mostly moderates from swing districts.

The majority of the chamber’s Republicans, however, opposed the legislation. Most argued the bill did not go far enough in strengthening school security while infringing too much on the rights of law-abiding gun owners.

The bill now heads to Mr. Biden, who is expected to sign it shortly. It marks the first time since 1994, when then-Senator Biden was instrumental in passing a 10-year ban on military-style rifles or “assault weapons,” that Congress has succeeded in passing a significant gun-control law.

The action was spurred by a recent wave of deadly mass shootings that horrified the nation, including a racially-fueled attack that killed 10 Black people in Buffalo New York and a terrifying rampage at an elementary school in Texas that left 19 children and two teachers dead.

Senate lawmakers began negotiating a deal last month, hopeful that they could break the decades-long logjam in the upper chamber that prevented previous gun-control laws from advancing. The bipartisan effort proved successful when more than 20 senators — roughly 10 from each party — unveiled a framework agreement that served as the basis for the bill.

It sought a delicate balancing between restricting access to guns for dangerous people while funding school security and mental health treatments. The bill’s provisions include:

• Incentives for states to adopt red-flag laws or other crisis intervention programs.

• An expansion of the definition of domestic violence to close the “boyfriend loophole” by including dating relationships. It blocks people with such convictions from gun ownership.

• Eligibility for gun ownership for individuals with domestic violence charges after five years provided they keep a clean criminal record.

• A felony designation for individuals who purchase guns for those who cannot legally buy or own them.

• A requirement for individuals who repeatedly buy and sell firearms to license as gun dealers.

• An additional $100 million in taxpayer funds for the federal background check system.

• A $2 billion allocation to the Education Department for mental health and school safety.

• $1 billion in grants for mental health programs to be administered by the Department of Health and Human Services.

Senate negotiators were able to strike a deal by utilizing a strategy that gave various lawmakers latitude in drafting different provisions of the bill.

The strategy expanded bipartisan support for the framework and shortened the time needed to strike a deal. It also paid dividends as 15 Republicans voted with all 50 Senate Democrats to pass the bill earlier this week.

“The American people do not have to choose between safer schools and the Constitution, and neither does the United States Senate,” said Senate Minority Leader McConnell, Kentucky Republican, who not only gave the green light for the bipartisan negotiations but voted for the bill.