The Great Days > News > How the Blue Diamond, a hot rock, led to a 30-year diplomatic row
News

How the Blue Diamond, a hot rock, led to a 30-year diplomatic row 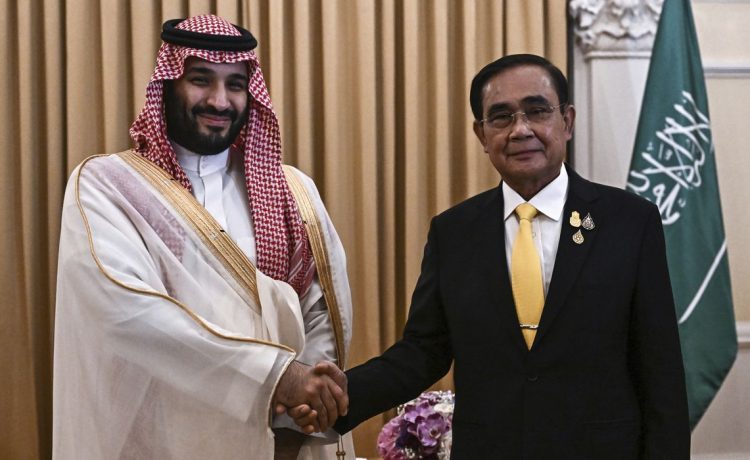 As the leader of a top global energy producer with billions and billions of dollars in investment and purchases to offer, the Saudi crown would ordinarily be welcomed to a country like Thailand with open arms. But the prince’s visit came only after Riyadh lifted three decades of sanctions which cost the Thai economy untold billions of dollars in lost trade, tourism and jobs — all because a Thai janitor, or perhaps a Thai gardener — stole the big diamond more than three decades ago.

The “Blue Diamond Affair” and its toxic mix of greed, sleaze, betrayal and bloodshed, still reverberates. The rare 50-carat stone at the heart of the caper was never returned to Riyadh, and its current location is a mystery. Or perhaps a secret.

That’s not all: There are niche export opportunities, including Thai chicken and beef slaughtered according to Islam’s halal law. Saudi Arabia faces perennial labor shortages and may offer jobs to Thai factory, construction and shipyard workers, electricians and machine operators, petroleum and natural gas technicians, hotel and health personnel, cooks, and housemaids.

But the countries only restored full diplomatic ties after more than three decades of hostility in January, when Mr. Chan-ocha accepted an invitation to visit Riyadh. The crown prince’s reciprocal visit, Thai officials hope, can finally get both countries past the incident.

“The restoration of ties has mutual benefits for both countries,” the crown prince said on Nov. 19 during a welcoming ceremony.

Thai politicians, businesses, and media predict Bangkok and Riyadh are leaping into a lucrative relationship which will help rescue Thailand’s troubled economy, but first the Blue Diamond affair needs some tidying up.

It all began in 1989, when Kriangkrai Techamong, a Thai servant employed by the ruling Saudi family, made off with some 200 pounds of jewelry and other valuable gems from the palace of Prince Faisal bin Fahd. The haul, which was hidden for a time in a vacuum cleaner bag and spirited away to Thailand, included a rare 50-carat blue diamond, which was among the largest and most valuable of its kind in the world.

A year later, Saudi businessman Mohamed al-Ruwaili — who had close links with the Saudi royal family — vanished in Bangkok while investigating the crimes. He is presumed dead.

Saudi Arabia, also angered by Bangkok’s inability to solve the apparent murders of four Saudi diplomats in Thailand around that time that may or may not have been related to the heist, expelled more than 200,000 Thai workers, banned Saudi tourist travel to Thailand, and lessened imports and exports.

An attempted rapprochement by the Thai government took a bizarre twist when Police Lt.-Gen. Chalor Kerdthes, the man who headed the investigation that caught Mr. Kriangkrai, flew to Saudi Arabia and returned some of the jewels. Saudi officials were angered to find that many of the recovered gems were fake, and the prize blue diamond — one of the largest of its kind in the world — wasn’t included at all.

In yet another twist in the complex chain of events, Lt. Gen. Chalor and other policemen would be charged and convicted for murdering the gem dealer Mr. Santhi’s wife and child. The general was sentenced at first to be put to death but later given a 50-year sentence for his role in the crime. He was granted a royal pardon in 2015.

Riyadh-Bangkok relations withered as the blue diamond-linked chain of events unfolded and have struggled to recover ever since. Thais working in the Arab kingdom — and sending home valuable remittances to their families — went from as many at 200,000 at the time of the robbery to a tenth of that by 2008.

There have been some new layers added to the mystery: A “confidential” February 2010 cable from the U.S. Embassy in Bangkok titled, “The Curse of the Blue Diamond,” and published by the anti-secrecy WikiLeaks website, reported that, “soon after the incident, some wives of Thai elites, particularly police commissioners and generals, were photographed wearing jewelry strongly resembling the stolen Saudi jewels at various official or high-society events.”

“The Blue Diamond itself had been spotted several times on the wife of a police general in the 1990s,” the embassy said, but it later disappeared. That cable was sent to the U.S. Central Intelligence Agency, the National Security Council, the U.S. Pacific Command, American embassies in China, Saudi Arabia, and elsewhere.

But no evidence has emerged proving definitively that Thai police received any of the still-missing jewels.

The American Embassy cable contended that four of the officers convicted in the death of the gem salesman’s wife and teenage son confessed that “the police allegedly kidnapped the family members in order to pressure Santhi to reveal information about what happened to the jewels.” After the jeweler paid, the “police gang” killed his wife and child to cover their tracks.
In 2001, “two judges, one from the Appeals Court and one from the Supreme Court, attempted to extort” hundreds of thousands of dollars from Lt.-Gen. Chalor, the cable said, apparently to declare him innocent.

The Supreme Court upheld Lt.-Gen. Chalor’s death sentence for kidnapping and two murders, but several years later, he was released.

Others in the gang were acquitted. One officer reportedly died in prison awaiting trial.

In January, a hopeful Prime Minister Prayuth met Prince Salman in Riyadh, and said relations now “must be better than the last 32 years.

“Both countries have agreed to fully restore diplomatic ties, including the appointment of ambassadors,” Mr. Prayuth said at the time.

A joint Saudi-Thai statement said Mr. Prayuth “expressed his sincere regrets for the tragic cases that took place in Thailand between 1989-1990.”

Thailand is committed “to providing appropriate security to members of the Royal Embassy of Saudi Arabia in Bangkok,” the statement said.

“We will move on, and will not talk about the past any more,” said Thai Foreign Minister Don Pramudwinai.