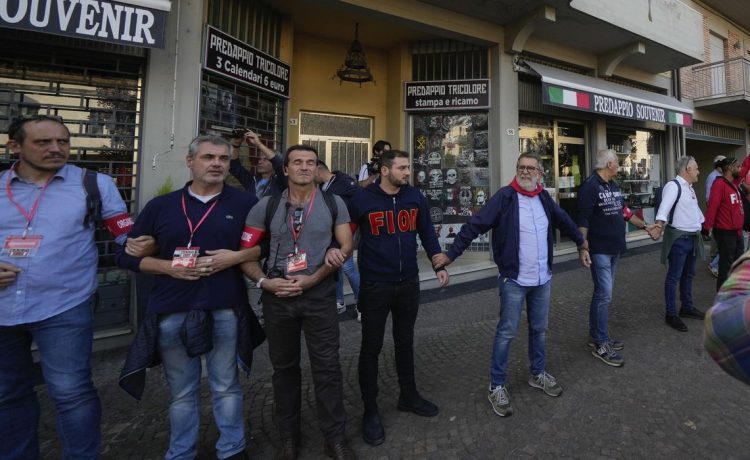 PREDAPPIO, Italy (AP) — About 1,000 anti-fascists celebrated the anniversary of the 1944 liberation of Benito Mussolini’s birthplace Friday, as scattered fascist nostalgics quietly marked the 100th anniversary of the March on Rome that brought the Italian dictator to power in a bloodless coup.

An organization representing partisans who fought to free Italy from fascism and Nazi occupiers during World War II organized the march down the main street in Predappio, where Mussolini was born and buried. They were joined by trade unionists and left-wing politicians.

“I owe this to my parents and to all those people who gave us freedom, and I mean the partisans,” Daniela Vicchi, the daughter of a partisan, said during the march.

Italy’s uneasy reckoning with its fascist past was under extra scrutiny as the dual anniversaries coincided this year with Italian Premier Giorgia Meloni’s first week as head of the first postwar government led by a party with neo-fascist roots.

Meloni has sought to distance her Brothers of Italy party from its more radical, nostalgic wing. At the same time, neo-fascist parties have been part of the Italian political landscape throughout the postwar period despite Mussolini’s disastrous colonial adventure in Africa and racial laws that persecuted Jews and sent thousands to their deaths in the Holocaust.

In a sign of that uneasy coexistence, organizers of the anti-fascist march placed security outside souvenir shops that sell Mussolini memorabilia in his Emilia Romagna birth and burial place, which has become a place of pilgrimage for far-right adherents who see the dictator executed in 1945 as a modernizing force in 20th century Italy.

The National Association of Partisans annual event marking Predappio’s World War II liberation conveniently prevents fascist nostalgics from commemorating the March on Rome in the town that day. Their event is scheduled for Sunday, when thousands are expected to march from the center of town to Mussolini’s crypt.

But that didn’t stop Mussolini admirers from visiting Predappio on Friday, about 50 of whom waited in line to pay their respects in front of the defunct dictator’s grave.

“Without the vote of fascists, Meloni would not be at the government. I can say this loud and clear,” said Ferdinando Polegatto, who drove all the way from Sequals to bring flowers to the tomb of Mussolini.

Mussolini’s great-granddaughters, Orsola and Vittoria Mussolini, also were on hand Friday to open an exhibit titled “100 Years of History between Revolution and Counter-Revolution.” Promotional material says the exhibit aims to tell the story of the Mussolini family “and above all the man who indelibly marked Italian history.” Both women declined to comment.

A traditionalist Catholic priest, the Rev. Giulio Tam, celebrated a Mass in Mussolini’s crypt, and later lamented the liberal changes in Italian society that some citizens fear Meloni might undermine as premier.

“The main thing we must consider 100 years after the March on Rome is what Benito Mussolini did and what happened after 1945.” Tam said. “What was the progress that was brought? If we look at the laws that were approved after 1945, we see laity, secularism, atheism, divorce, abortion, now they are talking about giving equal value” to same-marriage marriages.