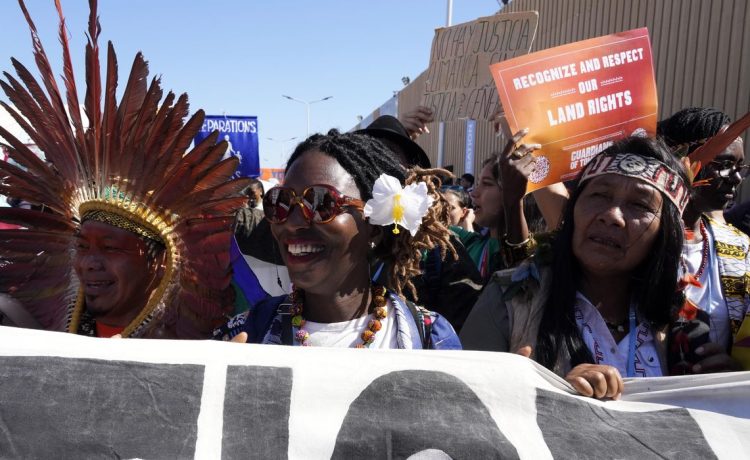 SHARM EL-SHEIKH, Egypt — Hundreds of environmental activists on Saturday called on industrialized nations at the U.N. climate summit in Egypt to pay for the impact of global warming, the largest demonstration yet that came as German officials raised concerns about possible surveillance and intimidation of delegates and other conference attendees.

Protests have mostly been muted at the conference, known as COP27, which is taking place in the seaside resort of Sharm el-Sheikh. Activists blamed high cost of travel, accommodation and restrictions in the isolated city for limiting numbers of demonstrators.

The protesters marched through the conference’s ‘Blue Zone,’ which is considered United Nations territory and governed by the global body’s rules. That has given the activists a bit more space to voice their opinions than in the rest of the country, where Egypt’s authoritarian government essentially bars protests.

Still, there were signs that Egypt was attempting to exert pressure inside the conference venue. Attendees of events at the German pavilion have complained about being photographed and filmed by people unknown to them in the days after Germany hosted an event there with the sister of a jailed Egyptian pro-democracy activist.

“We expect all participants in the U.N. climate conference to be able to work and negotiate under safe conditions,” Germany’s Foreign Ministry said in a statement. “This is not just true for the German but for all delegations, as well as representatives of civil society and the media. We’re in continuous contact with the Egyptian side on this.”

Egyptian officials didn’t immediately respond to a request for comment.

During Saturday’s rally, protesters chanted, sang, and danced in an area not far from where the negotiations were taking place. Past climate talks have traditionally seen very large protests at the end of the first week of the two-week summit, often drawing thousands of people. This year has been mostly muted, with sporadic and small demonstrations during the first week.

“Pay for loss and damage now,” said Friday Nbani, a Nigerian environmental activist who was leading a group of African protesters. Many protesters, alongside several vulnerable countries, have called for “loss and damage” payments, or financing to help pay for climate-related harms, to be central to negotiations. “Africa is crying, and its people are dying,” Nbani said.

Protesters also called for drastic reductions in greenhouse gas emissions being pumped into the atmosphere. Emissions continue to rise but scientists say the amount of heat-trapping gases need to be almost halved by 2030 to meet the temperature-limiting goals of the Paris climate accord of 2015.

Activists chanted “keep it in the ground” in reference to their rejection of the continued extraction of fossil fuels.

On Friday, some activists heckled U.S. President Joe Biden’s speech and raised an orange banner that read, “People vs. Fuels” before being removed. One of the activists, Jacob Johns, had his access to the conference revoked as a result.

“It’s just a great way to silence Indigenous voices nationally and globally,” said Johns, a member of the Akimelo’otham and Hopi nations in the United States.

The 39-year-old veteran activist said he went to the speech to protest the U.S.’s new program to encourage more corporate purchases of carbon offsets – a scheme for companies to get credits to pollute by contributing to the removal of carbon dioxide.

And what really angered the veteran activist was that Biden mentioned Indigenous knowledge and efforts in his speech.

It was “just a really good big slap in the face to climate action,” Johns said.

Saturday’s rallies also focused on human and gender rights, with protesters saying both are linked to climate justice and called for an end to a crackdown on rights and environmental activists, especially in developing nations.

Activists called for the release of jailed Egyptian pro-democracy activist, Alaa Abdel-Fattah, whose case grabbed international attention during the conference. His sister, Sanaa Seif, was in the conference campaigning for him to walk free.

“One day I hope my brother will be able to stand here with you and raise his voice, as he has always done for the repressed, the criminalized, the marginalized, and the ignored,” said Asad Rehman, the executive director of War on Want, a London-based anti-poverty charity. He was reading Seif’s remarks.

Abdel-Fattah’s family said he has escalated his hunger strike and stopped drinking water to coincide with the start of the conference. Since then, they have been demanding word on his condition at the prison, and their concerns grew Thursday after authorities told them he was undergoing an undefined medical intervention and blocked a lawyer from seeing him.