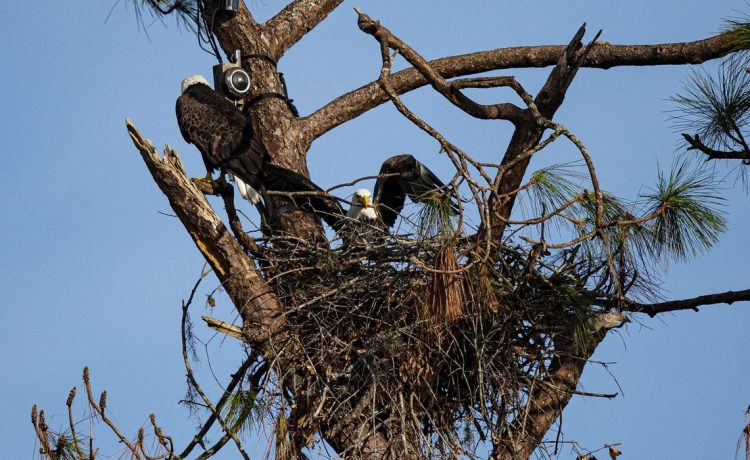 FORT MYERS, Fla. — The most devastating storm in Fort Myers history wiped out the main nesting location for Harriet and M15, the famous North Fort Myers eagle couple whose lives are streamed across the globe during nesting season.

“Their nest was completely demolished during Ian – not a stick left and many of their foundational branches broke off,” said Virginia Pritchett McSpadden, whose family owns the land where the eagle nest is located. “After the storm passed, I remember having this gutted feeling that they were harmed, the trees had fallen and they wouldn’t return to the area but to my surprise. …both eagles were spotted safe and already attempting to bring in new sticks. It brought tears to my eyes and I know to many others as well.”

Losing the nest during September is actually good timing for the birds because there’s still time to rebuild and lay eggs this season.

Rebuilding nests in October for bald eagles in South Florida

October is typically when bald eagles build and repair nests in South Florida.

It’s also the time of year when the Pritchett family turns on the Southwest Florida Eagle Cam. There are actually multiple cameras that show different angles of the nest and branches on which the birds rest.

The footage is streamed online to millions of viewers each year.

But the camera system was damaged by Hurricane Ian as well, so it may be some time before their daily lives are streamed again.

“Basically October is normally the time they come back from where they’ve been up north,” said retired biologist and planner Jim Beever. “Many of our eagles that come to this part of the world spent their summer in Chesapeake Bay and along the Atlantic Coast.”

Beever, who once tracked eagles in Southwest Florida for the state, said there should be enough time for Harriet and M15 to nest this year.

“An eagle pair can successfully build a nest, produce a nest and have young in one season,” Beever said. “Sometimes it makes them a little later to fledge and sometimes it doesn’t.”

One bonus, Beever pointed out, is there are plenty of building materials scattered on the ground.

Bald eagles break and shape sticks to fit into place.

Thankfully the main tree didn’t fall during the storm, or the famous eagles may have left the territory altogether.

“Just losing a nest is not going to change the eagle’s territory, but a losing a tree will,” Beever said.

The nesting cycles includes eggs being laid by the end of the year. Hatchlings will soon emerge, and fledglings will leave the nest between April and June.

“Their survival instincts are so strong,” McSpadden said. “While I am shocked, I am not surprised by their efforts and strength. We have seen them face challenges and prevail even stronger than before.

The cameras will be offline for now, but the family is hoping to restore at least one of the cameras soon.

“Unfortunately we are having a tough time rebooting the live cameras after the storm, but we’re continuing to try a few different things in hopes of restoring at least one camera,” she said. “We will continue to update everyone on our social media pages and website www.SWFLEagleCam.com.”

McSpadden said the birds are a symbol of strength in a time of need.

“To have this symbolic raptor in our backyard when we need hope, courage and strength more than ever, it’s incredible,” McSpadden said.