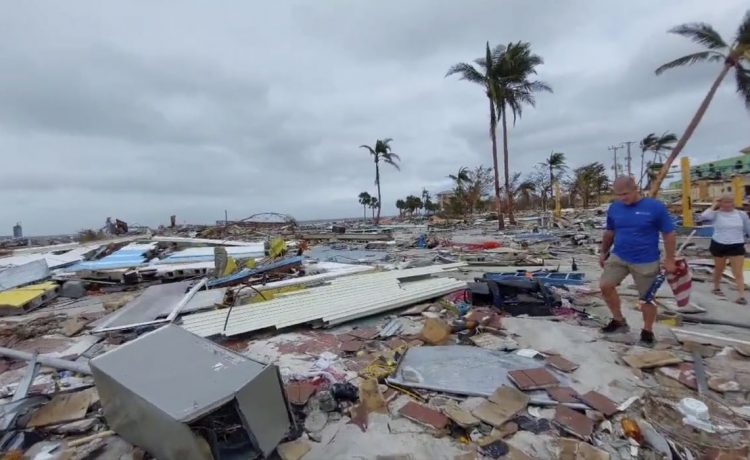 JACKSONVILLE, Fla. — Daylight brought a clearer view Thursday of the devastation Hurricane Ian brought to the southwest portion of the state, and on its heels a renewed fear that the massive storm will further unravel Florida’s deeply troubled homeowners insurance market after it sweeps north.

Democratic hopefuls are seizing on the panic and frustration to help elevate their prospects against Republican opponents and a GOP-leaning electorate just a few weeks away from the November election.

Democrat Val Demings, who represents Florida’s 10th District in Congress and is running against incumbent GOP Sen. Marco Rubio, wasted no time this week proposing her own plan to use federal dollars to help Florida residents dealing with dropped insurance plans and crushing premium increases.

In the governor’s race, Democrat Charlie Crist took a swing at incumbent Republican Gov. Ron DeSantis, whom he is hoping to unseat in November, blaming Mr. DeSantis for doing too little to lower premiums or help the thousands of residents who were dropped by their insurance carriers or left without coverage after several companies folded.

Mr. DeSantis said Thursday he is planning more action to reform the industry, but for now is focused on mobilizing state insurance officials and insurance companies to help homeowners process claims from Ian.

He’s blocked all homeowner policy cancellations issued ten days before the storm, and is setting up “insurance villages” in affected areas where people can file claims and in many cases, receive checks on the spot.

“At the end of the day. We’ve had a lot of issues with property insurance, but a lot of that is because of lawsuits and a lot of things that don’t focus on the core business,” Mr. DeSantis said. “This is the core business of paying these claims. And we understand that time is of the essence.”

Mr. Crist, who was governor from 2007 until 2011, called Mr. DeSantis, whom he trails by almost 5 points, “the worst property insurance governor in Florida history, period.” He said Mr. DeSantis stood by while insurance companies doubled rates “while they’re still going belly up when homeowners need them most.”

While that is not exactly true, the problem has hardly been resolved under the leadership of Mr. DeSantis and the GOP-led legislature. Ian has elevated it to a leading issue in Mr. DeSantis’ bid for a second term.

The insurance market for homeowners here has been spiraling into chaos for years, due mostly to roofing replacement insurance scams coupled with a regular battering from big storms.

It’s caused a half-dozen insurance companies to pull out of the state and has led to skyrocketing rates. The average premium increase this year is more than 40%. Tens of thousands of policyholders have been dropped, in part due to aging but undamaged roofs as companies seek to avoid roof replacement scams.

The state legislature met in special session ahead of hurricane season this spring and passed two bills, signed into law by Mr. DeSantis, that are supposed to help stabilize the insurance market and eventually reduce rates.

The new laws make it harder for insurance companies to deny coverage for homeowners with undamaged roofs newer than 15 years old, and limit attorney fees that are fueling the insurance scam lawsuits.

The legislation provided $2 billion to shore up insurance companies for hurricane losses and requires them to lower rates if they accept state help.

But the legislation did little to provide for residents coping with this year’s sharp increases that have in some cases more than doubled premiums.

“The Florida legislature should have addressed this but did not,” one resident of Fernandina Beach, in Northern Florida, lamented in a Facebook chat on the subject. “Vote accordingly.”

With frustrated and angry ratepayers in mind, Democrats are promoting a different approach to insurance regulation that would rely on federal funding to shore up carriers and force lower rates.

Mr. Crist, who resigned his congressional seat in May, and Mrs. Demings, are co-sponsors of legislation that would provide federal funding to reduce reinsurance rates that are hobbling insurance carriers.

Mr. Crist unveiled a multi-point plan to lower insurance rates and said if elected he would remove current insurance commissioner David Altmaier, who has allowed several rate increases, and would install his own commissioner who he said would block rate hikes.

During his earlier term as governor, Mr. Crist vetoed rate increases for insurance companies, which lowered rates but prompted State Farm Florida, the largest property insurer, to leave the state. Mr. Crist said during his term he cut premiums “across the board” by 10%.

Randy Fine, a Republican who represents Brevard County in the Florida House of Representatives, said Democrats “want to politicize the issue,” but agreed more legislative action to fix the insurance agency is needed. Lawmakers are mulling several reforms to try to curb scam insurance lawsuits over roofing claims, among them a requirement that lawyers pay the carrier’s legal fees if the lawsuit is deemed frivolous.