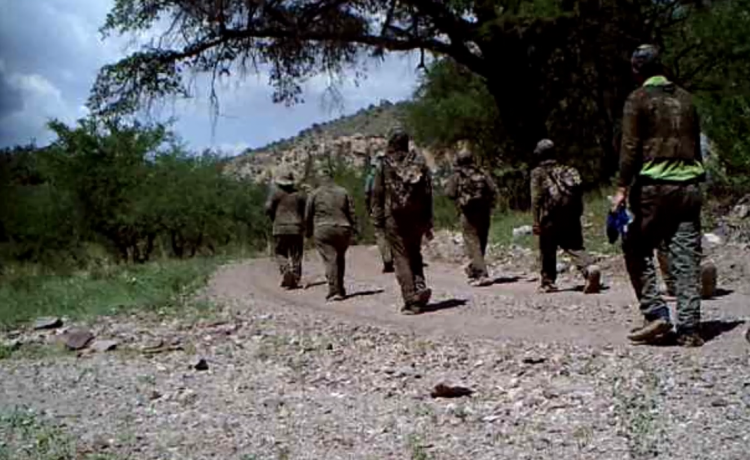 Those gaps in the border wall are personal to Jim Chilton, whose grazing lands cover five miles of the U.S.-Mexico border in Arizona, and who sees exactly what pours through the holes.

People in camouflage walk through, crossing his lands with the assurance that they’re not likely to be caught as they hoof it for the road near Arivaca, where they’ll catch a ride east to Tucson. Mr. Chilton said he’s been told by Border Patrol agents that one-fifth of the people crossing his ranch tote drugs.

Video he shared with The Washington Times shows them — nearly 2,500 people since February, compressed down into 80 minutes of footage powerful chiefly because of the monotony of person after person traipsing over desert scrub.

They’re tracked by cartel scouts, some on the Mexican side but others camped out on hillsides in the U.S., radioing positions of Americans to the smugglers so they can avoid getting caught.

As scary as that sounds, Mr. Chilton said the alternative could be more deadly. If the smugglers ran into him or his cowboys and a confrontation ensued, there was little doubt in his mind he’d be on the losing end.

“Our crossers, as you saw on the film, are all in camouflage with carpet shoes. They’ve come across rough territory. If they were asylum-seekers, why wouldn’t they go to Texas and just walk across the Rio Grande? Why are they coming through here?” he wondered.

“I’m outraged,” he said in a telephone interview with The Washington Times. “Bottom line, 4, 5, 6 years ago, we were averaging about 130 people every 6 months [on the images]. Since February, we picked up our cameras just lately, 2,500 images. That’s at least a 10-times increase.”

The wall was supposed to help.

Under the Trump administration, five miles of border on his ranching land was fenced. The problem is that Mr. Chilton has five and a half miles of the border. The remainder never got built, thanks to President Biden’s Inauguration Day order to halt construction.

Of the five miles that were built, there are still gaps to allow water to run off into Mexico. And even where the wall panels were erected, Mr. Chilton says the job isn’t done.

There was supposed to be a trench dug to run wires with fiber optics and power to operate lights and sensors that can detect intrusions and help agents get to the scene. That, too, was halted by Mr. Biden’s Day One pause.

“Any property owner would be outraged if a contractor, let alone the federal government, abruptly walked away from an unfinished job that exposed the property owner to potential harm,” the judge wrote.

But he ruled against Arizona in the case, saying just because Mr. Chilton was seeing more people it didn’t mean the lack of a completed fence was responsible for an overall surge in illegal immigration.

“It is entirely speculative that aliens willing to ‘risk life and limb’ to cross the border via the gap on Mr. Chilton’s property would have decided the risk wasn’t worth it if their next-best option was to cross via the many other gaps that would have remained regardless of Defendants’ conduct,” Judge Lanza ruled.

The Trump administration completed roughly 450 miles of fencing along the border, and had eyes on nearly 300 more miles before Mr. Biden shut it down.

Of those 450 miles, fewer than 69 miles included all of the technology promised by the Trump administration, according to an audit last year by the Government Accountability Office.

GAO investigators said the Trump administration front-loaded erecting wall panels to meet the president’s deadline, but fell behind on the rest of the “wall system” project.

“It’s kind of a matter of how do you construct something,” Mr. Chilton said. “You start it and you’re building a house and then at the end of the construction you put in the windows and doors. I personally think there was every intention to put it in, it’s just that President Biden stopped all construction before the house was completed.”

Even if the sensors were in place on the wall on Mr. Chilton’s ranch, it’s not clear how much good they would do.

He said Border Patrol agents are doing their best, but they just don’t have the time to patrol much around his area. They begin their shift in Tucson, and after going to the shift briefing and checking out a vehicle it takes hours to reach the border on his ranch.

The result, Mr. Chilton said, is that agents usually engage smugglers and migrants after they’ve already walked 15-20 miles into the country. And there are the smuggling scout camps, alerting the smugglers on how to avoid the agents.

Mr. Chilton recalled once taking a reporter to the border, and the reporter flew a drone over one of the cartel camps on the Mexican side. The scouts tossed rocks at the drone.

Later, the reporter returned and flew a drone that dropped a message offering beer, and at some point, the reporter and the scouts managed to connect over beer.

Mr. Chilton said the reporter said the scouts had visibility four or five miles deep into the U.S., and helped run a group or two a day through their location.

At one point there was a battle between cartels over the approach routes to the border just south of one of his neighbors’ ranch.

“We could hear the shooting,” Mr. Chilton said.

He said he’d personally seen one set of three bunkers dug into a mountain, then further east a set of about 10 bunkers.