Ilya Yashin, jailed Kremlin critic: Government has ‘failed to shut me up’ 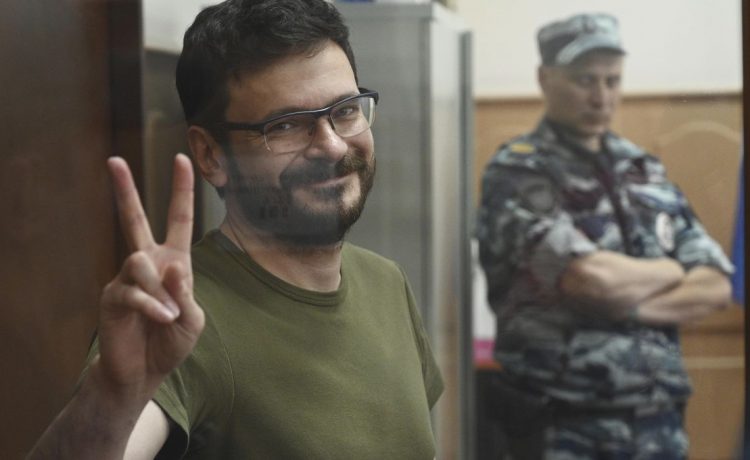 TALLINN, Estonia (AP) — Russian opposition politician Ilya Yashin may be in jail, but he refuses to be silenced.

His social media accounts are regularly updated with anecdotes about his life in detention or video commentary criticizing President Vladimir Putin’s rule. He gives interviews to media outlets by providing written answers to questions through his lawyers from behind bars.

He uses court appearances as an opportunity to speak out against the Kremlin’s devastating war in Ukraine – which is exactly what he is being prosecuted for.

“So far the authorities have failed to shut me up,” Yashin told The Associated Press in a lengthy handwritten letter from a pre-trial detention center in Moscow, passed on via his lawyers and associates last week.

“The opposition should speak the truth and stimulate a peaceful anti-war resistance … It is very important to help people overcome their fear. But one can only truly motivate people with their own personal example,” the politician added.

Yashin, 39, is one of the few prominent opposition figures who has refused to leave Russia despite the unprecedented pressure the authorities have mounted on dissent in recent years. He says leaving Russia would have affected his authority and value as a politician.

A sharp critic of the Kremlin, a vocal ally of imprisoned opposition leader Alexei Navalny and an uncompromising member of a Moscow municipal council, Yashin was arrested in June. The authorities charged him with spreading false information about the Russian military – a new criminal offense for which he faces up to 10 years in prison if convicted.

The charges against Yashin reportedly relate to a YouTube livestream video in which he talked about Ukrainians being killed in the Kyiv suburb of Bucha. He rejects the charges as politically motivated.

Yashin wrote answers to the AP’s questions in his small cell in Moscow’s notorious Butyrskaya prison that he shares with several other people.

His day there starts at 6 a.m. and ends at 10 p.m., he wrote, and consists of a walk, three meals, a couple of inspections and lots of free time. So he writes and reads a lot to make use of it.

Last week, his parents visited him in detention. His mother, Tatyana, told the AP in a phone interview that he was “holding up well and not regretting anything.”

She said the risk of her son getting arrested has been there for years – since 2012, when arrests followed mass protests in Moscow over reports of widespread rigging at a parliamentary election. “But you know how it is: You always hope for the best,” Tatyana Yashina said. “Nevertheless, we were, of course, prepared.”

Yashin said he, too, was ready for the arrest.

After the authorities adopted a law that criminalized the spread of false information about the military, effectively outlawing all criticism of what the Kremlin calls “a special military operation” in Ukraine, “it became obvious: The security forces will come after all public opponents of Putin who refuse to emigrate,” Yashin said.

“So yes, I tried to prepare for prison as much as it was possible. I got my health in order, completed my dental treatments. Explained the situation, explained the risks to my family and loved ones. Prepared my home for a raid, gathered a team of lawyers in advance. And most importantly – I mentally prepared to take the heat.”

What did surprise him, Yashin said, was how much respect law enforcement officers treated him with – they called his lawyers for him and after the raid allowed him to pack personal belongings to take with him to jail. One expressed respect for his decision to stay in Russia despite the risk of arrest, while another one called him “a worthy enemy.”

In detention, both the inmates and the guards are genuinely puzzled to hear that the politician is facing 10 years in prison “for a few words against the war,” Yashin wrote: “In Russia, courts hand down shorter sentences for theft, assaults, rapes and sometimes even murders.”

With all protests suppressed by a brutal crackdown and most opposition leaders leaving the country, spreading the word has become the main effort for many.

Even though Navalny is in jail, his team continues to post video exposes of corruption and regular livestreams on the politician’s YouTube channels. The three most popular channels combined currently have more than 10 million subscribers.

Yashin’s own YouTube channel, regularly updated even after his arrest with news analysis and political commentary, has nearly 1.4 million subscribers. Most of his videos over the past six months have been dedicated to the war and criticizing the Kremlin for it.

“Demand for an alternative point of view has appeared in society,” Yashin told the AP.

Denis Volkov, director of Russia’s top independent pollster Levada center, told the AP that the influence of independent sources of information in Russia has grown in recent years thanks to popular video blogs on YouTube as an alternative to state television.

“Show your grandmother, who is used to watching TV, a couple of interesting channels on YouTube. Teach your relative from a small town to use VPN so that he can read the news on a blocked independent news site. Create a chat with friends and neighbors, share links, anti-corruption investigations and opinions there.”

Yashin said that both before his arrest and in detention, he has seen very little support for the war in Ukraine, despite the authorities’ vast effort to control the narrative and weed out any criticisms or dissenting voices.

The Kremlin has insisted for months that there is overwhelming support for the invasion. Just this week, President Vladimir Putin’s spokesman Dmitry Peskov reiterated once again that “the absolute majority” of Russians were behind the decision to send troops into Ukraine.

Behind bars, the war is widely and actively discussed, Yashin said, but there is either an understanding among those discussing it that Russia has been drawn into a major crisis, or disappointment at Moscow’s modest successes on the battlefield.

“I’m convinced that by getting involved in the war, Putin has started the countdown of his time in power. He went all in, but miscalculated…”

The final lines of his letter from prison offer his hope for the future. “I am convinced that my country, after all, will become part of a free and civilized world,” he says. “But no one will win this battle for us. It is only our responsibility.”