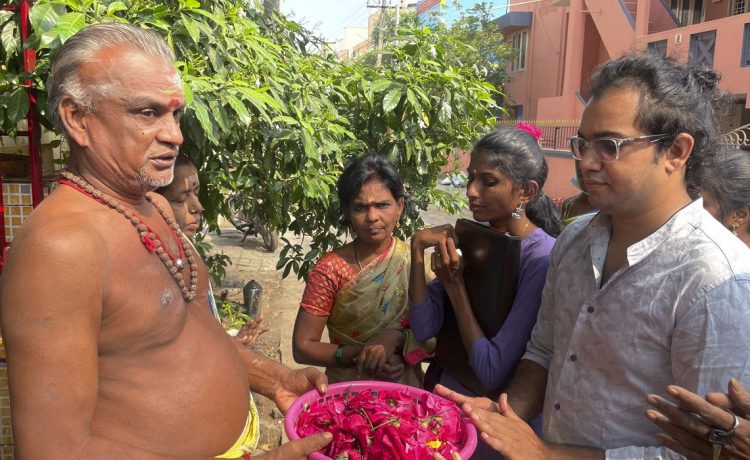 CHENNAI, India (AP) — Arjun Viswanathan stood on the street, his hands folded, eyes fixed on the idol of the Hindu deity Ganesh.

On a humid morning, the information technology professional was waiting outside the temple, the size of a small closet – barely enough room for the lone priest to stand and perform puja or rituals for the beloved elephant-headed deity, believed to be the remover of obstacles.

Viswanathan was among about a dozen visitors, most of them there for the same purpose: To offer prayers so their U.S. visa interviews would go smoothly and successfully. Viswanathan came the day before his interview for an employment visa.

“I came here to pray for my brother’s U.K. visa 10 years ago and for my wife’s U.S. visa two years ago,” he said. “They were both successful. So I have faith.”

The Sri Lakshmi Visa Ganapathy Temple is a few miles north of the airport in Chennai (formerly Madras), a bustling metropolis on the Coromandel Coast in southeast India — known for its iconic cuisine, ancient temples and churches, silk saris, classical music, dance and sculptures.

This “visa temple” has surged in popularity among U.S. visa seekers over the past decade; they can be found in almost any Indian city with a U.S. consulate. They typically gain a following through word of mouth or social media.

A mile away from the Ganesh temple is the Sri Lakshmi Narasimha Navaneetha Krishnan Temple, where an idol of Hanuman – a deity who has a human body and the face of a monkey – is believed to possess the power to secure visas. Also known as “Anjaneya,” this god stands for strength, wisdom and devotion. In this temple, he has earned the monikers “America Anjaneya” and “Visa Anjaneya.”

The temple’s longtime secretary, G.C. Srinivasan, said it wasn’t until 2016 that this temple became a “visa temple.”

“It was around that time that a few people who prayed for a visa spread the word around that they were successful, and it’s continued,” he said.

A month ago, Srinivasan said he met someone who got news of his visa approval even as as he was circumambulating the Anjaneya idol – a common Hindu practice of walking around a sacred object or site.

On a recent Saturday night, devotees decorated the idol with garlands made of betel leaves. S. Pradeep, who placed a garland on the deity, said he was not there to pray for a visa, but believes in the god’s unique power.

“He is my favorite god,” he said. “If you genuinely pray – not just for visa – it will come true.”

At the Ganesh temple, some devotees had success stories to share. Jyothi Bontha said her visa interview at the U.S. Consulate in Chennai went without a hitch, and that she had returned to offer thanks.

“They barely asked me a couple of questions,” she said. “I was pleasantly surprised.”

Bontha’s friend, Phani Veeranki, stood nearby, nervously clutching an envelope containing her visa application and supporting documents. Bontha and Veeranki, both computer science students from the neighboring state of Andhra Pradesh and childhood friends, are headed to Ohio.

Both learned about the visa temple on the social media platform Telegram.

Veeranki said she was anxious because she had a lot riding on her upcoming visa interview.

“I’m the first person in my family to go the United States,” she said. “My mother is afraid to send me. But I’m excited for the opportunities I’ll have in America.”

Veeranki then handed over the envelope to the temple’s priest for him to place at the foot of the idol for a blessing.

“We’ve been hearing about applications being rejected,” she said, her hands still folded in prayer. “I’m really hoping mine gets approved.”

If she and Bontha make it to Ohio, they want to take a trip to Niagara Falls.

Mohanbabu Jagannathan and his wife, Sangeetha, run the temple, which Jagannathan’s grandfather built in 1987. Their house is on a cul-de-sac, which is considered bad luck in several Asian cultures. In Chennai, it is common to find a Ganesh temple outside cul-de-sac homes due to the belief that the deity has the power to ward off evil. At first, only neighbors came to the temple, Jagannathan said.

“But over the years it started earning a quirky reputation,” he said. “A lot of visa applicants who came to the temple spread the word that they found success after praying here.”

In 2009, his father, Jagannathan Radhakrishnan, reconstructed the temple and added the word “visa” to the temple’s name. Jagannathan said the success stories are heartwarming; visitors sometimes stop by his home to thank his family for keeping the temple open.

“I’ve never been bothered by it,” Jagannathan said. “We offer this as a service to the public. It’s a joy to see how happy people are when they come back and tell us they got their visa.”

His wife said she was touched by the story of a man who came all the way from New Delhi to pray for a visa to see his grandchild after eight years apart. She remembers another time when a woman called her in tears, saying her visa application was rejected.

Padma Kannan brought her daughter, Monisha, who is preparing to pursue a master’s degree in marketing analytics in Clark University. Kannan believes her daughter got her visa because of this powerful deity.

“I found this temple on Google,” she said. “I was so nervous for her, and so I prayed here.”

Monisha Kannan said she is not so sure she got her visa because of this temple, but she said she came to support her mom.

“I’m skeptical,” she said. “I’m just someone who goes with the flow.”

“We pray for our children and things happen easily for them,” she said. “I think when they go through the rigors of life themselves, they will start believing in the power of prayer.”

Viswanathan said he is not someone “who usually believes in such things.” When his brother got his British visa a decade ago after offering prayers here, Viswanathan chalked it up to coincidence. He became a believer when his wife got her U.S. visa two years ago, he said.

The day after he visited the temple this time, Viswanathan’s employment visa was approved. He’ll head to New Hampshire in a few months.