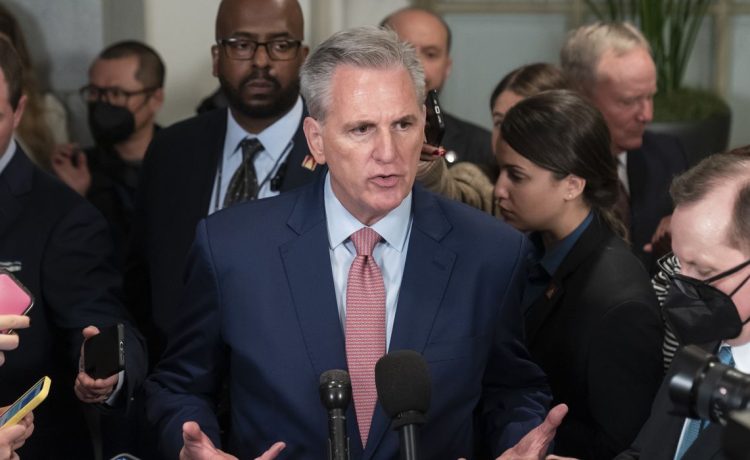 House Republicans made history Tuesday, but not in the way they had hoped.

Instead of seizing the House majority with a historic number of new GOP lawmakers, the party’s minuscule advantage following the midterm elections gave a group of conservatives leverage to thwart Republican Leader Kevin McCarthy’s bid for speaker. The impasse left the party in disarray and the chamber in opening-day limbo for the first time in a century.

The House abruptly adjourned Tuesday after three ballots cast by voice vote over five hours failed to elect either Mr. McCarthy or any other lawmaker to serve as House speaker.

Mr. McCarthy, of California, later retreated to one of the speaker’s offices across from the House chamber. There, he strategized with Republicans ahead of the House reconvening at noon on Wednesday.

Conservative holdouts say he’ll have to start seriously negotiating with them if he has any hope of eventually garnering the 218 votes he’ll need to win the speaker’s gavel.

They are demanding changes to House rules that would make it easier to eject a speaker, and they want promises that they’ll get a chance to vote on a GOP agenda that includes term limits for members of Congress, a balanced budget act, a bill to end income taxes and replace them with a sales tax, and legislation advancing their favored strategy to secure the southern border. The lawmakers also want a rules change to ensure a minimum of 72 hours is provided to review legislation ahead of a vote, and they seek an end to rushed consideration of massive government spending bills that have contributed to inflation and a soaring debt and deficit.

“This is not about Kevin McCarthy,” a top aide to one of the holdouts told The Washington Times on Tuesday. “I know it seems that way. But it’s not. It’s about doing what’s right for the Republic, saving the Republic. That is where these principled members are.”

Mr. McCarthy showed little interest in negotiating, even after losing the second round of votes.

He told reporters in the Capitol the threats from his GOP opponents were not going to persuade him to cave into their demands or force him to step aside.

“That’s not how it works,” Mr. McCarthy said. “You’ve got to put the people before politics, and I don’t think that’s what their constituents elected them to do.”

The inconclusive speaker’s vote left the chamber in a rare moratorium, halting the opening day organizing that is required to start the legislative session.

With no speaker or subsequent organizing, the chamber operates under the authority of the House clerk from the preceding Congress, Cheryl L. Johnson, who was appointed last year by then-Speaker Nancy Pelosi, California Democrat.

Ms. Johnson will preside over the chamber until a speaker is elected, and lawmakers are unsure of when that will happen.

Mr. McCarthy defended his leadership and the GOP’s advance to the majority. He said Republicans will fight for border security, fiscal responsibility and parental rights in education once they get past the speaker’s fight.

Mr. McCarthy enjoys support from most of the GOP conference, and dozens have pledged to back Mr. McCarthy for speaker and no one else, no matter how many ballots it takes.

But conservatives who voted against him have been steadfast in their opposition. Some say they won’t give up until Mr. McCarthy drops his bid for the gavel.

“It’s going to become increasingly clear he’s not going to become speaker,” Rep. Bob Good, a Virginia Republican and McCarthy opponent, told reporters at the Capitol Tuesday. “We will never cave. We will never vote for him. So the sooner he pulls out, for the good of the country, for the good of the Congress, the better off everyone is and we can move together to find the best person who can reach 218.”

Conservative holdouts don’t have anyone in mind to replace Mr. McCarthy, although in interviews, several have suggested substituting Majority Whip Steve Scalise. The Louisiana Republican and longtime GOP leader is likely the only other Republican who could win the position. But Mr. Scalise backs Mr. McCarthy and nominated him on the third ballot.

The conservative rebels threw out their own symbolic picks on Tuesday, even though it was clear neither could win. They nominated Rep. Andy Biggs, Arizona Republican and leader of the rebellion, on the first ballot, and he picked up nine votes. They nominated Rep. Jim Jordan, an Ohio Republican and McCarthy backer, on the second and third ballot — he received 19 and 20 votes, respectively.

The divided GOP vote meant that on all three ballots, while no lawmaker won a majority, Mr. McCarthy garnered fewer votes than Rep. Hakeem Jeffries, the Democratic leader who won a vote for speaker from every lawmaker in his party.

Some House Democrats watched the GOP chaos with glee and provided their own running commentary on social media.

Longtime Democratic Rep. Bill Pascrell, of New Jersey, posted gifs of dumpster fires, a clown car, and the flaming Hindenburg. Rep. Hank Johnson said the “never-ending vote” for speaker shows the GOP, “already in chaos, confusion & crisis,” while House Democrats, just five votes away from the majority, “Are united. We are ready to get to work.”