The Great Days > News > Inside the Beltway: Are you a ‘MAGA Republican,’ poll asks
News

Inside the Beltway: Are you a ‘MAGA Republican,’ poll asks 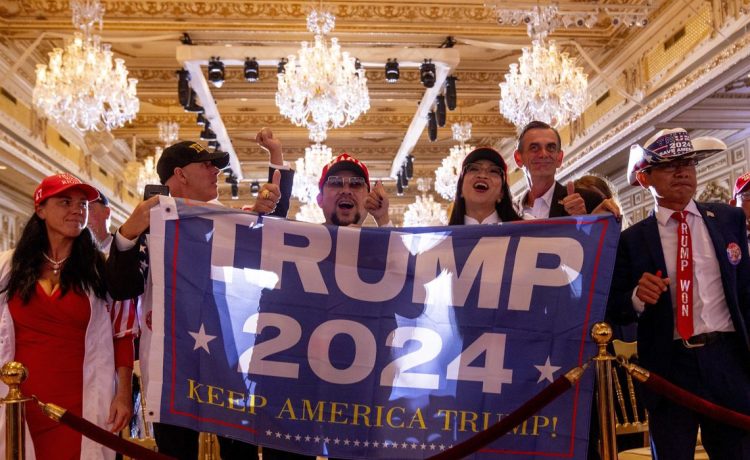 This is a very straightforward poll question: “Do you identify as a MAGA Republican?” asks a new Economist/YouGov poll — and yes, it was a survey of Republicans only.

“MAGA,” of course, if the acronym for “Make America Great Again,” the longtime motto of former President Donald Trump and his quest for the White House, and a saying much adored and promoted by Mr. Trump’s loyal fans.

So who among Republicans are “MAGA”? Here are the numbers.

The survey found that 42% of the Republican respondents agree they “identify as a MAGA Republican,” the poll found. That finding included 48% of men, 47% who voted for Mr. Trump in 2020, 44% of “conservative” Republicans, 29% who are moderate GOPers — and interestingly enough, 70% of those who identified as “liberal” Republicans.

That last number constitutes the greatest percentage in the entire poll, which reviewed the opinions of Republicans in 24 different demographic categories. The second highest percentage emerged among Hispanic respondents — 67% reported they were MAGA Republicans.

Those were the three highest numbers among respondents who sunned the MAGA designation..

Well, yay. The annual presidential turkey pardon takes place Monday at the White House, starring President Biden, a circle of cameras and reporters, and a sleek, plump bird who will retire after the event to a farm in North Carolina. The event marks the 75th anniversary of this ritual — which has proved a major media moment over the decades.

But it’s not enough, say those who espouse animal rights.

Ahead of the presidential turkey pardon, People for the Ethical Treatment of Animals (PETA) has sent a letter to Mr. Biden, asking him to also extend mercy to geese and ducks. They (and their livers) are the source of foie gras — a very rich spread popular among royals through the centuries. Britain’s current king is not among them, however.

“I’m writing on behalf of PETA, the world’s largest animal rights organization, and all people who are vegetarian or vegan, whether for humane, environmental, health, or religious reasons, with a respectful plea. Now that King Charles has banned foie gras from his royal residences, will you please follow his lead by pardoning ducks and geese, not just turkeys, this Thanksgiving and enacting a foie gras–free policy at the White House? We’d be delighted to send you delicious and decadent faux gras to sample,” advised Ingrid Newark, president of PETA, in a letter shared with Inside the Beltway.

“Because of increased awareness of the extreme cruelty involved in this process, people around the world are avoiding foie gras. California banned the sale and production of this vile dish, effective in 2012, and Vice President [Kamala] Harris successfully fended off attempts to reverse the state’s prohibition on the sale of it during her tenure as California’s attorney general,” Ms. Newkirk advised.

He ran as a Republican nominee for the U.S. Senate, lost his bid but emerged to say the experience was an “honor of a lifetime.”

That would be Don Bolduc, who says he hosted 85 town-hall meetings around the Granite State in his quest for the office. He called the events both “grueling and enlightening,” as he faced supporters and antagonists alike. The retired Army brigadier general was defeated by incumbent Sen. Maggie Hassan.

“As a concerned American, I know how frustrating it can be to feel isolated from the political process. And I know good public servants must be present and held accountable by their constituents. I developed a mantra for the kind of public servant I wanted to be — any time, any place,” Mr. Bolduc wrote in an essay for NH Journal.

“I learned our style of campaigning is what people are so desperately searching for — a connection to their government and an opportunity to shape the policies of our communities and our nation. Please keep up the fight,” he said, adding that he was proud of his campaign and appreciated the kindness he encountered “on the trail.”

What is the nation in for as President Biden and his administration sally forth into 2023, with an eye on 2024? Things do not look so promising, perhaps.

“Get ready, America: The Biden administration, emboldened by the Democrats’ midterm over-performance, is doubling down on its disastrous strategy to date. Per insiders speaking to Axios, Biden plans to remake ‘the White House into a more political operation,’” notes the New York Post in an editorial.

“Impossible! Biden’s already run the most political White House in recent memory, where the larger public good is brutally ignored in favor of the immediate interests of the president and his party,” the newspaper said, citing Mr. Biden’s “disastrous border policy,” his student loan forgiveness program, and persistent rumors of personnel concerns at the White House.

“Biden’s as good as telling the country to brace itself for more of the same and worse. So thank your lucky stars the GOP took the House. Otherwise, the scope of the disaster would be unimaginable,” the Post editorial advised.

• 29% overall think things are going in “the right direction”; 2% of Republicans, 29% of independents and 57% of Democrats agree.

• 4% are unsure about the issue; 1% of Republicans, 3% of independents and 6% of Democrats agree.