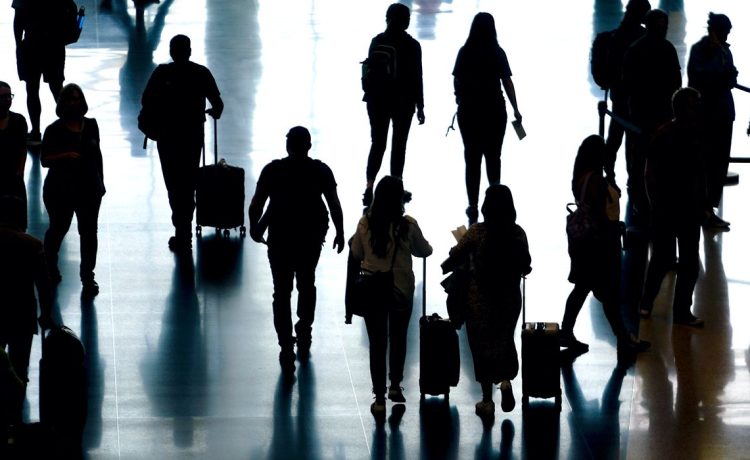 A new study of Census Bureau data reveals the influence of “immigration from abroad” on the U.S. population.

Kenneth M. Johnson — a senior demographer at the Carsey School of Public Policy and professor of sociology at the University of New Hampshire — has delved into newly released Census numbers.

Mr. Johnson reports that the U.S. population grew by 1,256,000 between July 2021 and July 2022, according to newly released Census Bureau estimates.

“This was an increase from the record low growth of the preceding year, but it remains well below historical rates. There were just 245,000 more births than deaths in the past year, an increase from the 144,000 in the previous year, but still the second smallest natural gain in 80 years. Deaths reached a record high of 3,443,000 last year, 20% more than three years ago,” Mr. Johnson wrote.

“In contrast, there were 3,688,000 births, a 2.9% increase over the preceding year, but still the second fewest since 1984. Because the natural gain was so small, immigration from abroad, which increased last year, accounted for 80% of the population gain,” he said.

The report was released Monday and is based on data from the Census Bureau Population Estimates Program released on Dec. 22, covering the period between July 1, 2021, and June 30, 2022.

“Biden’s nearly four-hour visit to El Paso was highly controlled. He encountered no migrants except when his motorcade drove alongside the border and about a dozen lined up on the Ciudad Juarez side. His visit did not include time at a Border Patrol station, where migrants who cross illegally are arrested and held before their release,” the station said.

“The visit seemed designed to showcase a smooth operation to process legal migrants, weed out smuggled contraband and humanely treat those who have entered illegally, creating a counter-narrative to Republicans’ claims of a crisis situation equivalent to an open border,” the KFOX 14 report noted.

The new Republican majority in the U.S. House will focus on accountability of the White House and the Biden administration, predicts Tommy Pigott, rapid response director for the Republican National Committee.

“Republicans have made clear they will fight to get answers for the American people on President Biden’s inflation-fueling policies, the Democrats’ 87,000 IRS agents, parental rights in education, the threat from the Chinese Communist Party, safety and security in America’s cities, the border crisis and Biden’s open borders policies, the disastrous Afghanistan withdrawal, COVID’s origins and Big Tech censorship,” Mr. Pigott said in a written statement shared with Inside the Beltway.

“Even though Biden promised transparency when he took office, his administration’s MO has been obstruction and obfuscation. And Democrats in Congress have signaled they will defend Biden’s failures ‘without question.’ That’s par for the course from Biden, who has broken one promise after another, and Democrats who care more about power than the consequences of their policies,” Mr. Pigott said.

“The Ivy League school has announced that Clinton ‘will join Columbia University as professor of practice at the School of International and Public Affairs, and presidential fellow at Columbia World Projects,’ according to a university announcement,” the report said.

In her role, Mrs. Clinton will “convene outstanding policy thinkers from around the world to develop innovative policy solutions,” according to a university statement cited by The College Fix.

The former first lady, U.S. senator and secretary of state offers “extraordinary talents and capacities, together with her singular life experiences,” advised Lee C. Bollinger, president of the school.

A NOTICE OF NOTE

“MyLINK is available on CIA.gov and allows prospective applicants to express interest in Agency employment by submitting their resumes online. Job-seekers will be able to indicate interest in up to four different occupations, and CIA recruiters will identify candidates with requisite knowledge, skills, and abilities. If an individual’s resume meets the CIA’s needs, a CIA recruiter will contact the candidate to discuss their interest in a position. Based on interactions with the candidate, the recruiter may invite them to submit a formal application for employment,” the CIA said in a statement.

“The recruitment changes make the Agency more competitive as an employer of choice, and will help CIA recruit the diverse skills and experiences required to carry out the CIA’s mission,” the agency said.

“The CIA is committed to recruiting a diverse workforce of the highest caliber talent, and it is my hope that changes in our application process will make CIA an even more attractive place for those who are interested in public service and specifically the unique opportunities offered by working at CIA,” Director William J. Burns said in a statement.