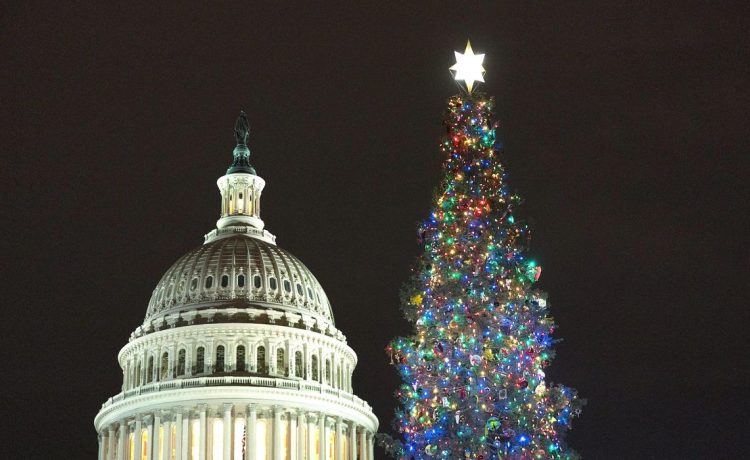 In a year of discord and disagreement, there’s at least one thing that Republicans and Democrats agree on at the moment. Both sides think “Silent Night” is the best Christmas song of all. Yes, there’s a poll which asked respondents to name their favorite seasonal tunes, of both the sacred and commercial varieties.

The results? The respondents volunteered their favorites — ultimately naming 15 traditional carols like “Oh Holy Night” and “Oh Come All Ye Faithful,” along with 22 seasonal tunes like “All I Want for Christmas Is You” and “Here Comes Santa Claus.” And the results?

“Silent Night” emerged as the winner in the religious category, cited by 15% of the total respondents, according to a Monmouth University poll released Thursday. And the demographic breakdown: 15% of Republicans and 15% of Democrats agreed with that pick.

But wait, there’s more. Republicans and Democrats also agreed that “Jingle Bells” was their favorite non-religious Christmas tune — cited by 4% of all respondents; 4% of Republicans and 4% of Democrats also agreed. Another 4% of both GOPers and Dems also cited “White Christmas” as their top pick — while 2% named “Winter Wonderland” as their favorite.

Neither side — as in 0% of both Republicans and Democrats — agreed that “Santa Baby” was their top favorite tune, however.

The poll also finds that “Merry Christmas” is America’s most common holiday greeting, although the number who say it (61%) is down slightly from five years ago (67%). Three in 10 Americans (30%) usually say “Happy Holiday,” the analysis noted.

In 2019, former Homeland Security Secretary Jeh Johnson said that 1,000 illegal encounters per day at the border “overwhelms the system and is a crisis,” points out Tommy Pigott, rapid response director for the Republican National Committee.

“We are currently averaging seven times that number at the border,” Mr. Pigott said in a statement to Inside the Beltway, citing a new Fox News report which advised that Homeland Security now predicts that number to rise substantially.

“Authorities expect encounters to potentially reach as high as 14,000 per day after Title 42 comes to an end next week,” Mr. Pigott continued.

“Officials are already releasing illegal immigrants en masse into the U.S., hundreds of migrants are camping outside in near-freezing temperatures as shelters are full, and over 1 million illegal immigrant ‘gotaways’ have already escaped into the U.S. since President Biden took office. That is all before the end of Title 42,” Mr. Pigott noted.

“Mr. Biden’s border crisis is about to get a whole lot worse — and he just doesn’t care,” he said.

House and garden cable channel HGTV has named the nation’s “top small towns” to visit at Christmas time — praising them for standing by their local traditions and unique histories.

Here’s yet another ratings victory for Fox News, now marking its 21st straight year as the most-watched cable news network, besting CNN and MSNBC with an average nightly primetime audience of 2.3 million in the last year, according to Nielsen Media Research. MSNBC averaged 1.2 million and CNN averaged 730,000.

Fox News programming also made up 92 of the leading 100 cable news shows which aired during the year. In addition, Fox News also emerged as the top-rated network in the entire cable realm — beating its non-news rivals for the seventh straight year.

“From America’s choice on election night to the home of late night’s smash hit show, 2022 was a testament to our unmatched skill in delivering the most innovative news and opinion programming to our audience which continues to rank as the most politically diverse in cable news. I am beyond proud of our entire team’s incredible achievements this year,” said Fox News Media CEO Suzanne Scott in a statement shared with Inside the Beltway.

The highest rated show, by the way, is “The Five,” with an average nightly audience of 3.4 million viewers throughout the year. This is the “first time in television history” that a non-primetime cable program closed out the year as cable TV’s most-watched offering, the network said.

• 68% of registered U.S. voters are not satisfied with the way things are going in the country today.

• 67% disapprove of the job Congress is doing.

• 56% disapprove of the overall job President Biden is doing.