The Great Days > News > Inside the Beltway: Democrats v. the Supreme Court
News

Inside the Beltway: Democrats v. the Supreme Court 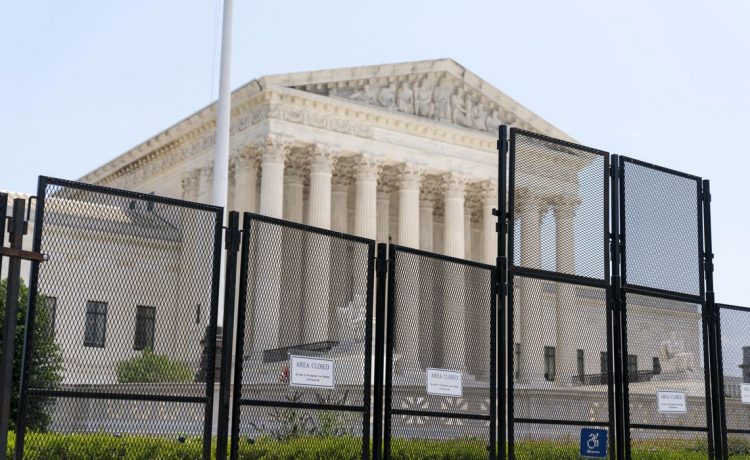 Democrats are supremely unhappy with the U.S. Supreme Court at the moment.

“In the immediate wake of several important U.S. Supreme Court decisions strengthening the Second Amendment, reining in the power of the Environmental Protection Agency, and ending the constitutional right to an abortion, a majority of Democrats say they want to abolish the Court,” reports the Heartland Institute, a free-market think tank based in Illinois.

The organization has conducted a poll with Rasmussen Reports that found that only 33% of Democrats have a “favorable” view of the Supreme Court, compared to 72% of Republicans who view it favorably, and 52% of voters overall.

The Democrats’ ire and impatience is very apparent: 67% believe the Court is “sexist” and “in favor of men”; 64% would like to expand it to 13 justices; 56% believe the court is “racist”; and 53% would “abolish the current Supreme Court” and replace it with “a new, democratically elected Supreme Court.”

No, really. This is what the wide-ranging poll of 1,025 likely U.S. voters conducted July 6-7 has found.

Though the numbers are too complex to go into here, Republicans essentially harbor the exact opposite opinions of the highest court.

“For centuries, the U.S. Supreme Court has largely remained one of the most venerable institutions of the entire federal government. Although the Court has made some misguided decisions during its long history, it has also righted those wrongs over the years. By and large, the American people hold the Court in high esteem,” said Chris Tango, senior editor for the Heartland Institute, in a statement shared with Inside the Beltway.

“However, there is absolutely a movement afoot, principally among leftists and America’s youth, who desire to ‘reimagine’ the Supreme Court so that it will become nothing more than a rubber stamp for their radical agenda. Fortunately, most likely voters reject this notion and steadfastly support the Supreme Court,” he said.

Find the poll and much more at Heartland.org.

Let us recall that when President Biden took office, his approval rating stood at 57%, according to Gallup. Mr. Biden earned that rating from Jan. 21-Feb 2, 2021. He also enjoyed a 57% from April 1-21 of that year.

Matt Margolis, a columnist for PJ Media, explains all in an analysis titled “Biden’s Approval Ratings, or What I Like to Call the Roaring ‘20s.” Yes, the president’s numbers have plummeted.

“Boy, it seems like we’re always saying that Joe Biden has hit ‘a new low,’ and yet he repeatedly proves that he’s not quite finished his descent to rock bottom. According to the latest Civiqs poll, Ol’ Joe’s approval ratings have entered the 20s for the first time. The survey found that only 29% of voters approve of the job Joe Biden is doing as president, while 58% disapprove,” Mr. Margolis wrote.

When Election Day dawns on Nov. 6, the outcome could be determined by a very specific factor, says one close study which has determined the few “truly contested regions” in the U.S.

“The battlefield for control of Congress is small. Here are the places to watch,” declared Politico, which has identified the 20 counties it says will decide the midterms. Keep in mind that there are 3,006 counties in the nation.

Meanwhile, here are the “counties that matter” as listed by the news organization, followed by the specific race or lawmaker to watch, and arranged here in groups of five for clarity’s sake. They are:

During the week of July 4-10, Fox News led the ratings in both cable news and the entire basic cable realm throughout the day and evening, ultimately earning an average of 2 million primetime viewers per night, according to Nielsen Media Research.

“The Five” was the ultimate draw with an average nightly audience of 3.2 million, followed by “Tucker Carlson Tonight” with 3 million. The shows drew the two largest audiences of any program in the entire cable realm.

• 37% overall expect to vote in the 2024 Democratic presidential primary; 2% of Republicans, 26% of independents and 89% of Democrats agree.

• 15% overall are “unlikely” to vote in a presidential primary; 6% of Republicans, 28% of independents and 5% of Democrats agree.

• 9% don’t know or refused to answer the question; 2% of Republicans, 14% of independents and 2% of Democrats agree.