The Great Days > News > Inside the Beltway: Mike Pence on running on Trump ticket again
News

Inside the Beltway: Mike Pence on running on Trump ticket again 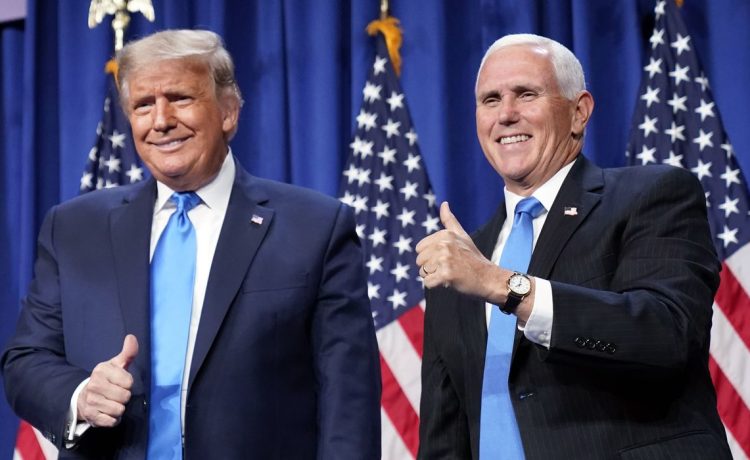 Here’s yet another possibility to consider when considering Republican potential candidate match-ups in the 2024 presidential election, an intriguing idea set forth in a conversation between “Fox News Sunday” anchor Shannon Bream and former Vice President Mike Pence.

There was some talk of former President Donald Trump. Here’s how the exchange went:

“Any scenario in which there would be Pence-Trump ticket?” asked Ms. Bream.

Mr. Pence had a hearty chuckle over the question.

“Anything can happen in politics,” the anchor reminded him.

“But I will tell you, we’ll — we’ll sort out what our role, what our calling is. But it – you know me well enough to know, we’re going to — we’re going to pray all the way through it, and, uh, we’ll go where we’re called,” the former vice president said.

Mr. Pence has traveled to 35 states boosting Republican candidates during the midterm election and promoting his new book “So Help Me God.”

He also recalled in Sunday’s interview the days when he served in the White House.

“I truly do believe that the American people want to get back to the policies of the Trump-Pence administration, of less taxes, less regulation, more American energy, secure borders, a strong military, standing tall in the world, standing with our allies, standing up to our enemies,” Mr. Pence noted.

“They want to have judges on our courts who will defend our liberties at a time when many of our liberties are under assault every day. But I also hear from people that — that they long for leadership that could unite our country around our highest ideals, including civility and respect,” he said.

Veteran actor and outspoken Hollywood conservative James Woods has experienced a notable victory in social media since a certain person purchased Twitter. That would be business magnate, billionaire and space entrepreneur Elon Musk who bought Twitter for $44 billion in October.

So how’s it going?

“I just noticed that I gained another 100,000 followers since @elonmusk saved Twitter from the suppressors of free speech. That’s 300,000 people in a few weeks, many of whose voices were silenced and are now free once again to enjoy the rights guaranteed by our constitution,” Mr. Woods tweeted Saturday.

Mr. Woods, by the way, has 2.8 million followers and led the trends on Twitter throughout Sunday.

‘A SEAT AT THE TABLE’

Is there room for improvement in the hallowed halls of Capitol Hill? Why, yes.

“For far too long, the House Leadership from both parties have consolidated power into the select few, rather than embracing the diverse viewpoints of the rank and file Membership representing constituents across America. Instead of mimicking Nancy Pelosi’s regime, the new Speaker of the House should adopt the following reforms in order to return democracy to the House of Representatives,” said David McIntosh, president of Club for Growth PAC, in a written statement.

“Return to the rules of the 114th Congress. It is especially important to have a functioning amendment process for the House to function. This includes allowing ‘open rules’ on all major rule legislation, such as appropriations. It is unacceptable that in the last six years there have been no – zero – amendments on legislation permitted from rank and file Members brought to a vote,” he said.

Oh, and one last thing.

The Club for Growth is a leading national free-enterprise advocacy group. Club for Growth PAC endorses and raises money for candidates who stay true to the fundamental principles of limited government and economic freedom.

Well so much for a certain genre of nightstand reading. Tales of Capitol Hill, the White House and other high-level political locales don’t seem to have the cachet of yore.

“Joe Biden, bookstore poison. Readers are steering clear. So are publishers. For the book industry, ‘it’s a black hole’.”

Those headlines are from Politico, which reports that the book publishing universe has experienced a “dramatic Biden-era falloff in sales of president-centric literature.”

“Sales for even well-reviewed Biden books by respected authors have been anemic: New York magazine correspondent Gabriel Debenedetti’s buzzy book on the Biden-Obama relationship has sold just north of 1,000 hardcover copies since it dropped in September, according to numbers from Bookscan,” noted Michael Schaffer, a senior editor at Politico.

Yes, well. The No. 1 book on the Amazon “Best Sellers” list as of Sunday afternoon is “Interesting Facts For Curious Minds: 1572 Random But Mind-Blowing Facts About History, Science, Pop Culture And Everything In Between,” by Jordan Moore. The No. 1 book on the “B&N Top 100” list is “Noodle and the No Bones Day” by Jonathan Graziano.

75% of U.S. adults are “dissatisfied with the way things are going in the country today.”

65% think President Biden will be “unsuccessful” in getting his programs passed into law in the next two years.

61% think Republican leaders in Congress will be unsuccessful in getting their programs passed into law.

61% think Democratic leaders will be unsuccessful in getting their programs passed into law.

46% think the results of the midterm elections will bring “some” change to the way things are going in the country.