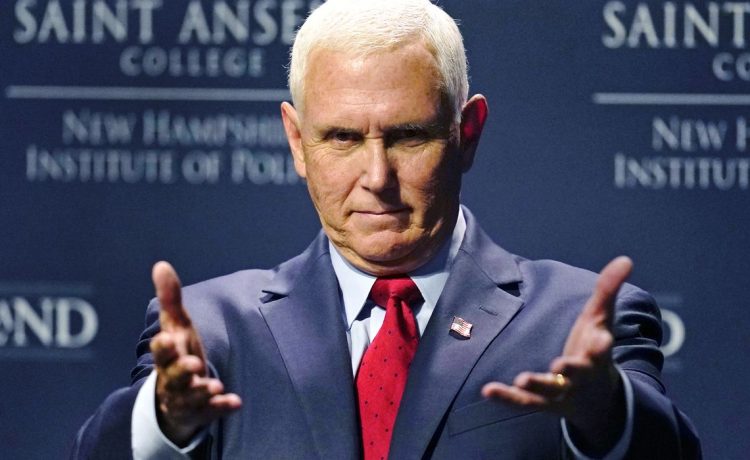 The news media is quickly homing in on former Vice President Mike Pence, casting him as a potential candidate for president ready to redefine himself  — and quite possibly the Republican Party. Here’s a few headlines from the past 48 hours:

Meanwhile, Mr. Pence is going through the motions of an emerging presidential  hopeful; he will be in Iowa on Friday and Saturday. The visit includes a trip to the Iowa State Fair in the company of Sen. Chuck Grassley — Iowa Republican, of course.

There will also be a significant event in Des Moines with the Iowa Faith and Freedom Coalition.

In the meantime, Mr. Pence has already visited South Carolina and New Hampshire, offering public messages subject to much interpretation.

Mr. Merrill served as a campaign strategist to — among others — Sens. Mitt Romney and Marco Rubio during their respective presidential campaigns.

“Trying to be something for everyone in a potentially crowded field isn’t typically a recipe for success,” Mr. Merrill advised the publication.

It’s a tricky business though. Others are also monitoring the public appearances of Mr. Pence, along with his political prowess.

“I think he’s a viable candidate,” Peter Bragdon, a former Granite State GOP legislator, told InsideSources. “He talked a lot about what he did in the administration. He’s sort of offering ‘Trump without Trump.’”

GUARDIAN ANGEL ON THE AIR

Curtis Sliwa — the red-beret-wearing founder of the Guardian Angels and a former Republican candidate for New York City mayor — has taken to the talk-radio airwaves on WABC, among the most influential of the Big Apple radio stations.

“The Curtis Sliwa Show” has made its debut and now airs at midday — winning praise as an “extremely creative and truly groundbreaking in its utilization of satire, hard-hitting commentary and subtle sarcasm that appeals to the listeners’ intelligence,” this according to Talkers Magazine, an industry source.

“I will push into new realms that have not been approached with ‘theatre of the mind’ broadcasts during the height of the day. It will become the alternative to straight non-stop repetitive political talk. The satire and parodies that I am doing can win over whole new audiences,” Mr. Sliwa told the publication.

He founded the Guardian Angels as a volunteer city street and subway patrol and youth outreach in 1979. The organization now has chapters in 130 cities in 13 countries.

Multiple national polls have already suggested that the presidential race will be a very close one, with the winner eking out a victory with just a few percentage points. Here’s one scenario on how such a close race could play out in one particular spot.

Former President Donald Trump enjoys considerable, stable popularity in the Granite State — significant because of its “first in the nation” voting status when the polls open in a presidential election.

So how is Mr. Trump doing?

“A New Hampshire Journal poll taken after the FBI raid on his Mar-a-Lago home finds former President Donald Trump still enjoys a strongly favorable view from First Congressional District Republicans,” the journal said in an analysis shared with Inside the Beltway.

In the new poll, 73% of Republicans in the district have a favorable view of the former president, while President Biden wins approval from just 9%.

“I’m not surprised at all,” state Rep. Fred Doucette, Salem Republican and a longtime supporter of the 45th president, told the publication.

The aforementioned raid plus continuous negative partisan politics appear to be having an effect on local voters.

“I’ve had more people who don’t like Donald Trump talk to me in the past week than in the past year. One very vocal opponent just told me, ‘I don’t like Trump, but this is bull[expletive],’” he advised.

• 36% of U.S. adults “strongly disapprove” of the way that the U.S. Congress is handling its job.

• 22% “somewhat disapprove” of the job Congress is doing.

• 16% neither approve nor disapprove of the job Congress is doing.

• 11% “somewhat approve” of the job Congress is doing.

• 4% “strongly approve” of the job Congress is doing.