The Great Days > News > Inside the Beltway: Republicans say ‘hola,’ claim ‘Democrats are in denial’
News

Inside the Beltway: Republicans say ‘hola,’ claim ‘Democrats are in denial’ 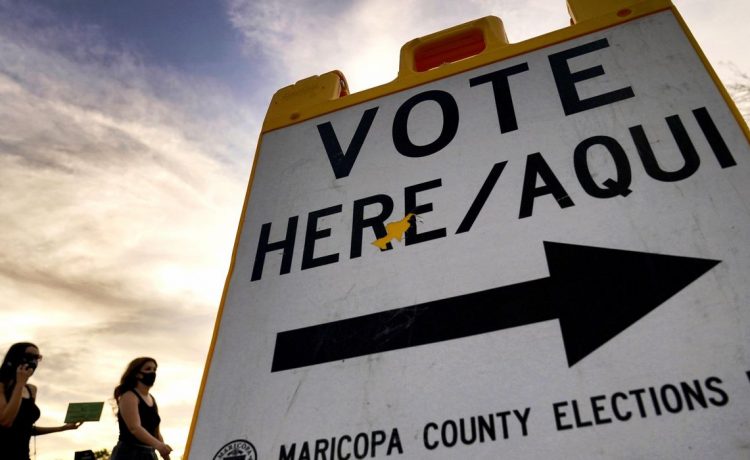 The Republican State Leadership Committee is determined to up the GOP appeal among Hispanic Americans. The committee has just released its first-ever Spanish language ad — backed by a “five-figure buy” and set to air in Arizona, Colorado, Florida, Nevada and Texas.

The emphasis is on a “freedom-focused agenda,” which could have considerable appeal to this sizable voting bloc.

“While Democrats think they deserve automatic loyalty from Hispanic voters at the ballot box regardless of the harm their destructive agenda is doing to the country, state Republicans know that growing their support with Hispanic communities can only come from continuing to fight for a freedom-focused agenda that lifts up all Americans,” said Dee Duncan, president of the committee, in a statement to Inside the Beltway.

The efforts could pay off. An estimated 32 million Hispanics were eligible to vote in the 2020 presidential election, and 16.1 million got to the polls that year, according to the Pew Research Center. That was a 30% increase over the 2016 turnout.

“Even small inroads with Hispanic voters could tip a number of Democratic-held swing seats to the GOP,” reported Axios on July 14.

“Democrats are statistically tied with Republicans among Hispanics on the generic congressional ballot, according to a New York Times-Siena College poll. Dems held a 47-percentage point edge with Hispanics during the 2018 midterms,” the news organization said.

“Democrats are in denial about why they are losing Hispanic voters,” wrote Mike Gonzalez, a scholar with the Heritage Foundation who also served as a speechwriter for former President George W. Bush.

“Polls have for two years now consistently shown a significant migration of voters with Spanish surnames to the Republican side,” Mr. Gonzalez said in a new report for the foundation.

He cited a Texas Public Policy Foundation survey of 608 “Hispanic adults” living in Texas released in March, which found that 87% of them agreed they were “proud to be American.”

Another 73% believe there is a “crisis” at the southern border, 72% count Texas history as part of their heritage, while 51% want more border security.

“Hispanic Texans have a deep connection to America and Texas because of our founding principles and the promise of individual liberty, equal opportunity, and shared values,” said Sherry Sylvester, an academic fellow with the foundation.

The University of Kansas will offer a course titled “Angry White Male Studies” during the fall semester.

“This course charts the rise of the ‘angry white male’ in America and Britain since the 1950s, exploring the deeper sources of this emotional state while evaluating recent manifestations of male anger,” notes an official description of the course, according to Campus Reform, a conservative watchdog group which monitors liberal bias on college campuses.

“This course examines how both dominant and subordinate masculinities are represented and experienced in cultures undergoing periods of rapid change connected to modernity as well as to rights-based movements of women, people of color, homosexuals and trans individuals,” the description said.

Among the questions about the angry white male: “Where does he come from? What’s he angry about? Is his anger misplaced? Is he blaming the right people? How long has this been going on? Is he a global phenomenon? And how do we move forward?”

Campus Reform has reached out to the campus about the course and plans an update.

INFLATION GOES BACK TO SCHOOL

There’s some back-to-school dread out there, and it’s not coming from schoolchildren.

Families with children in elementary through high school are expected to spend an average of $864 on school items, according to the National Retail Federation in a new analysis of the trends.

Total spending on the kids is expected to reach a record high of $37 billion. It’s worse, though, for the older crowd.

“Total back-to-college spending is expected to reach nearly $74 billion, up from last year’s record of $71 billion and the highest in history. More college students and their families plan to shop this year compared to last and anticipate spending an average of $1,199,” the retail group said in a new report.

“Families consider back-to-school and college items as an essential category, and they are taking whatever steps they can, including cutting back on discretionary spending, shopping sales and buying store- or off-brand items, in order to purchase what they need for the upcoming school year,” said Matthew Shay, president and CEO of the organization.

Meanwhile, a timely new Yahoo Finance/Morning Consult poll finds that 50% of all U.S. adults who are parents are concerned about being able to afford school supplies for their children over the next month.

According to the survey, 78% of respondents will cut back on discretionary spending to afford back-to-school supplies and about 25% of those polled aren’t confident in their ability to afford school field trips.

“Less than half of parents (42%) say they are confident they can afford childcare,” noted an accompanying analysis

• 56% of U.S. adults say they “definitely will vote” in the 2022 congressional elections in November.