Inside the Beltway: Sarah Palin returns as national political figure 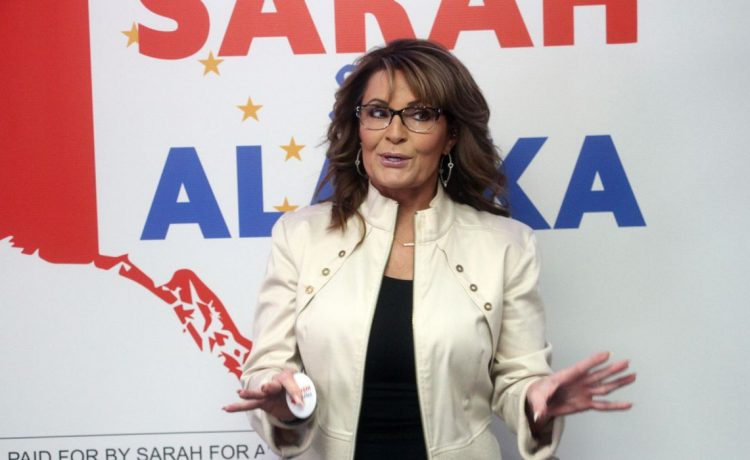 Former Alaska Gov. Sarah Palin is running for an open congressional seat in the state, with the election coming on Tuesday.

Ms. Palin has not drawn this much press coverage since, as 2008 vice presidential hopeful, she appeared with the late John McCain in a pair of red Naughty Monkey high heels, which created both a political and fashion sensation — as did her nickname “Mamma Grizzly.”

Now she is Candidate Grizzly. She looks way younger than her age of 58. Along the campaign trail, Ms. Palin still wears her remarkably stylish shoes — and weighs in regularly on national politics.

“As your congresswoman, I will do everything in my power to help drain the Washington D.C. swamp,” she said in a statement Friday, also voicing her discontent with the “weaponization” of certain federal agencies against former President Donald Trump.

She has his endorsement. Former HUD Secretary Ben Carson is also among those who support her run for office.

“Sarah knows what it took to make America strong and prosperous under President Trump, and she’ll fight every day in Congress to bring that greatness back,” Mr. Carson said in his endorsement on Aug. 4.

The candidate has a very clear message for voters.

“Now are we ready to take our country back? Time to stir the pot again — this time unite around it. Do not bend, it’s now or never for freedom in America,” she noted in a recent Instagram post

News organizations here and abroad are on the watch, of course. Some headlines from the last 24 hours:

“The election will not only test the weight of Palin’s celebrity, but also that of Donald Trump – in a remote state that fiercely values independent thought,” noted The Guardian.

“The return of Sarah Palin: How the Tea Party star is plotting a comeback” said The Telegraph.

“Mother Earth gets angry from time to time, and this legislation will help us address all of that,” Mrs. Pelosi said after the legislation passed in the Senate.

Marc Morano, founder of the watchdog group Climate Depot, could hardly believe it.

“Has it comes to this? Congress is now passing a pork-barrel spending bill in Washington to make the Earth ‘happy’? But, the Earth — ‘angry’ or not — will not notice the impact on global CO2 emissions, let alone the climate,” he said.

“Is Pelosi’s comment what passes for intelligent climate discourse in Washington D.C. these days?” he asked in a statement shared with Inside the Beltway.

Congressional Democrats have come up with a proposal that just might compromise the integrity of the U.S. Supreme Court. It’s called the Supreme Court Tenure Establishment and Retirement Modernization Act — that’s TERM Act for short — and it was introduced in late July.

“Their sneaky court-packing scheme endangers the separation of powers and individual liberty. It must be rejected,” wrote Charles Brandt, an analyst for the Federalist who explains the finer points.

“Frustrated by a slew of conservative legal victories, Democrats introduced the TERM Act, which would establish 18-year term limits for Supreme Court justices, after which they would ‘assume senior status,’ a quasi-retirement that drastically reduces their caseload and corresponding influence,” Mr. Brandt advised.

“To fill these vacancies, the president would appoint a new justice during the first and third years of his term. Cast as ‘an effort to restore legitimacy and independence to the nation’s highest court,’ the TERM Act would ironically undermine both, transforming the court from an institution of law to a panel of politicians,” he noted.

“If enacted, the TERM Act would spell the demise of judicial independence. Justices would no longer decide cases in accordance with the letter and spirit of the law. Instead, concern for future employment would sway reason and undermine the legitimacy of the Supreme Court as an impartial arbiter of the law. The statute would immediately relegate conservative Justice Clarence Thomas to senior status, clearing the way for President Biden to elevate another progressive to the bench,” Mr. Brandt said.

JUST IN CASE YOU WONDERED

So who will run for president in 2024? Well, here’s one entry in the White House derby that seems to be a lock, based on a conversation between ABC’s “This Week” host Jonathan Karl and White House press secretary Karine Jean-Pierre.

What are President Biden’s plans?

“You have seen at least some Democrats in elected office say that Joe Biden shouldn’t run for re-election — that it’s time for younger, newer leadership. I’m not going to ask you if he’s going to run because he’s already said that he’s going to run,” Mr. Karl began.

• 11% expect the House to become evenly divided between both parties; 9% of Republicans, 10% of independents and 13% of Democrats agree.

• 25% overall expect that Democrats will retain a majority in the House; 7% of Republicans, 16% of independents and 50% of Democrats agree.

• 28% overall are not sure which party will control the House; 15% of Republicans, 38% of independents and 23% of Democrats agree.