The Great Days > News > Inside the Beltway: Spending bill called ‘a grab bag of theft’
News

Inside the Beltway: Spending bill called ‘a grab bag of theft’ 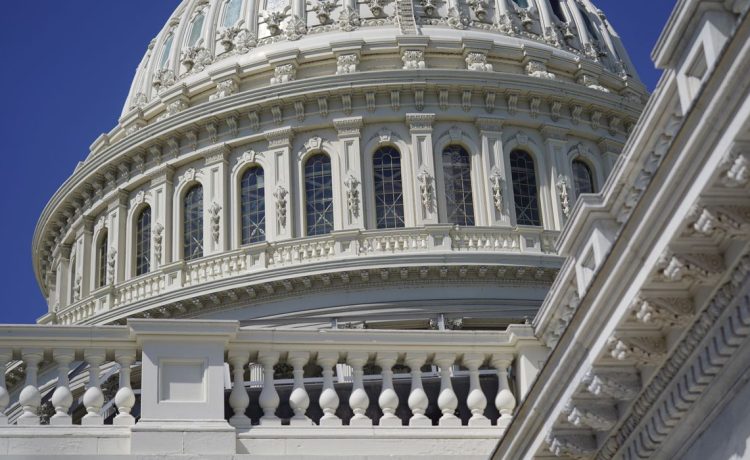 Some close observers are not impressed by the gigantic $1.7 trillion omnibus spending bill that rocketed through Capitol Hill this week.

“It’s a grab bag of theft. But it’s what they do here,” declared nationally syndicated radio host Chris Plante, who broadcasts from the nation’s capital and has covered Capitol Hill and the White House for decades.

Passage of the weighty 1,455-page hunk of legislation took some legislative finesse, he noted.

“Democrats are better at it — but Republicans jump in too,” Mr. Plante told his audience.

A South Carolina Republican also was not impressed.

“A rushed end-of-year vote on a $1.7 trillion spending package chock full of government waste is exactly the type of bad governance South Carolinians sent me to Washington to fight against,” said Sen. Tim Scott in a written statement shared with Inside the Beltway.

“Instead of crafting a bill focused on bringing down prices, helping small business owners, securing our border, and increasing opportunity for all Americans, we are being asked to blindly pass legislation that will plunge our nation even further into debt in service of liberal priorities like more IRS funding and a radical climate agenda,” Mr. Scott said.

News organizations are still wading through the legislation, noting both the predictable and unpredictable expenditures that the lawmakers crammed into the bill. On the positive side, there’s a pay raise for U.S. military troops and a 22.4% increase for veteran’s medical care.

But wait. There’s also considerable funding — $50 million — to protect North Atlantic right whales from fishing gear entanglements or vessel collisions and $300,000 to monitor “plankton distribution” in the oceanic waters. Another new project would rename a federal building in San Francisco as the “Nancy Pelosi Federal Building.”

Meanwhile Republican House Whip Steve Scalise described the huge bill in a written statement to Inside the Beltway as “all of this pork, all of this new spending that nobody can explain.”

Let’s pause and salute an event which took place 52 years ago, courtesy of a trio of brave, classy astronauts. Here is an account of the event from NASA.

“The first crew to spend Christmas in space, Apollo 8 astronauts Frank Borman, James A. Lovell, and William A. Anders, celebrated the holiday while circling the Moon in December 1968, the first humans to have left Earth orbit. They immortalized the event on Christmas Eve by taking turns reading the opening verses from the Bible’s Book of Genesis as they broadcast scenes of the Moon gliding by below,” the NASA historical account said.

“An estimated one billion people in 64 countries tuned in to their Christmas Eve broadcast. As they left lunar orbit, Lovell radioed back to Earth, where it was already Christmas Day, ‘Please be informed there is a Santa Claus!’” the space agency said.

KEEPING TABS ON THEM

One close observer appeared troubled that some lawmakers did not give visiting Ukraine President Volodymyr Zelenskyy a hearty round of applause during his recent appearance before Congress.

“For any members of Congress who refused to clap for Zelenskyy, we need to know from them exactly why,” tweeted NBC News presidential historian Michael Beschloss, also a contributor to PBS.

“Would like to know who in the House Chamber is refusing to clap for Zelenskyy,” he noted in another tweet.

And there’s one more:

“How many members of Congress refused to attend tonight’s speech because they do not support Zelenskyy’s Ukraine? Important to know this and why,” Mr. Beschloss also asked in yet another tweet.

A PECAN PIE OF NOTE

The official recipe is verbatim from historical White House records maintained by the National Archives.

Combine sugar, butter, salt and vanilla and mix together. Add corn syrup and blend until just combined. Add eggs and blend until mixture is smooth. Place pecan halves on the bottom of the pie crust. Pour filling over the pecans. (Pecans will float to the top). Bake at 325 degrees until filling is set, about 55-75 minutes. Let cool. Serve warm with vanilla ice cream or whipped cream. (Makes one pie).

• 16% of registered U.S. voters say they are “extremely hopeful” about the future of the country; 12% of Republicans, 8% of independents and 25% of Democrats agree.

• 37% of registered U.S. voters say they are “very hopeful” about the future of the country; 31% of Republicans, 33% of independents and 46% of Democrats agree.

• 35% of voters overall say they are “not very hopeful” about the country’s future; 42% of Republicans, 41% of independents and 24% of Democrats agree.

• 2% of voters overall don’t know how they feel about the issue; 2% of Republicans, 3% of independents and 0% of Democrats agree.

• Merry Christmas, happy holidays, happy New Year and thank you for reading Inside the Beltway.