The Great Days > News > Inside the Beltway: The Traveling Democrats
News

Inside the Beltway: The Traveling Democrats 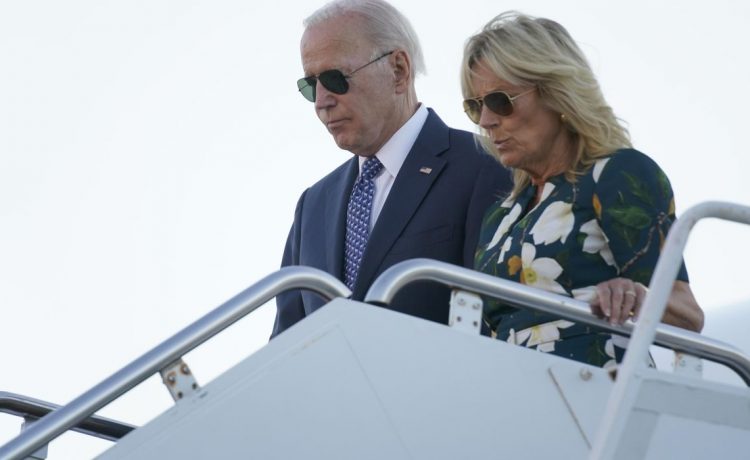 Certain very high-profile Democrats seem to prefer the lifestyle of places other than the nation’s capital these days. Consider, for example, this tally of President Biden’s recent weekend travels. It was compiled by former CBS News White House correspondent Mark Knoller, who has meticulously tracked this particular presidential behavior for many years, and through several presidencies.

Here is his most recent recap for Mr. Biden.

“If you’re wondering about Democrats’ midterm prospects: President Joe Biden, the leader of the Democrat Party, is on vacation one month from Election Day. Mr. Biden doesn’t care to campaign for his own Party, and families can expect him to care even less about addressing the recession, crime surge, and border crisis he and Democrats created,” advises Republican National Committee spokesperson Emma Vaughn in a statement to Inside the Beltway.

She too is referring, of course, to the president’s habit of spending many weekends in Delaware.

But wait, there’s more. — this time concerning the Democratic Congressional Campaign Committee  — the DCCC for short.

“Punchbowl News and the New York Times report that DCCC chairman Sean Patrick Maloney is spending the last days before the midterms on the campaign trail — in Paris, France. This is at least the second French vacation Maloney has taken on the DCCC’s dime,” points out Mike Berg, deputy communications director for the National Republican Campaign Committee, also in a statement to the Beltway.

“Americans who actually live in this country are fed up with Democrats’ destructive socialist policies, so it’s not surprising Democrats are being forced to raise money in France,” Mr. Berg observes.

Another high-profile Democrat is on the move. That would be first lady Jill Biden, who was in San Francisco on Friday — a visit that included an appearance with House Speaker Nancy Pelosi at a Democratic Congressional Campaign Committee event. Then it was on to Seattle and Tacoma, Washington, for another fundraiser, this time for Sen. Patty Murray, Washington Democrat.

“As the midterms grow closer, Dr. Biden is expected to ramp up her traveling and deliver speeches related to her own portfolio of issues, including cancer research, education and support for the military. But she will also emphasize fund-raising and supporting Democrats in tight races, according to a person familiar with her plans,” noted The New York Times in a summary of the plans.

Meanwhile, here is her travel schedule for this week: On Wednesday, she will travel to Milwaukee, Wisconsin, to speak with the Milwaukee Teachers’ Education Association. Thursday finds Mrs. Biden in Fort Benning, Broward County, Florida, to host an event with Rep. Debbie Wasserman Schultz focused on breast cancer survivorship.

During her first year as first lady, Mrs. Biden traveled to “35 states, over 60 cities, and three other countries,” according to her biography, found at Whitehouse.gov.

THOUGHTS FROM THE FOREST

Our old friend “Deep Woods” — a political sage who indeed lives in the far Northeastern woods of the U.S. — has been mulling over a certain dynamic in Russia. Here’s what he has to say at this juncture:

“Who financed Russia President Vladimir Putin’s war? I have some interesting observations. Russia is a gas station with nuclear weapons. Their principal source of income is oil. On Jan 20, 2021, the price of oil was $55.75 a barrel. Due to our new president’s ‘green policy’, oil prices started to rise,” Mr. Woods advises.

“By the date of the Russian invasion, Feb 24, 2022, the price of oil was $101.29 a barrel. Following the invasion, prices went even higher. Ergo: our energy policy gave Russia President Vladimir Putin a windfall profit which allowed him to finance his war. Imagine the chaos in Russia if all of a sudden prices of oil dropped precipitously. Just saying,” Mr. Woods notes.

We will look forward to hearing his commentary, perhaps, when and if OPEC cuts back on oil production, a possibility announced last week.

“On Wednesday, oil-producing nations — including Russia — announced they would cut production by 2 million barrels per day, saying it was a way to get ahead of a weakening global economy. But many policymakers in the U.S. immediately worried a spike in oil prices could both provide Russia with an influx of oil revenue to continue their war in Ukraine and hurt Democrats’ chances in the coming midterm elections,” wrote Ben Werschkul, Washington correspondent for Yahoo Finance, in an analysis released Saturday.

‘The politics of pot.”

This handy phrase comes from Michael Allen, co-founder and executive editor of Axios.

In review, let us recall that President Biden recently announced on Thursday that he will pardon all prior federal offenses of simple marijuana possession — and that he will also call on state governors to pardon simple state possession offenses.

There’s some strategy afoot, some say.

“The surprise decision last week pardoned thousands of Americans convicted of ‘simple possession’ of marijuana under federal law. Why it matters: Biden’s announcement is the latest in a stream of small policy gifts to persuade the Democratic base that he’s keeping promises from the 2020 campaign trail,” Mr. Allen said.

• 58% of U.S. adults think mortgage interest rates will go up in the next year.

• 55% say their regular monthly bills will go up.

• 55% say the rate of inflation will increase.

• 51% think the taxes they pay will increase.

• 43% think the number of unemployed people in the U.S. will increase.

• 26% think their household income will increase.

• 22% think their personal standard of living will increase for the better.