The Great Days > News > Inside the Ring: China moving toward nuclear coercion
News

Inside the Ring: China moving toward nuclear coercion 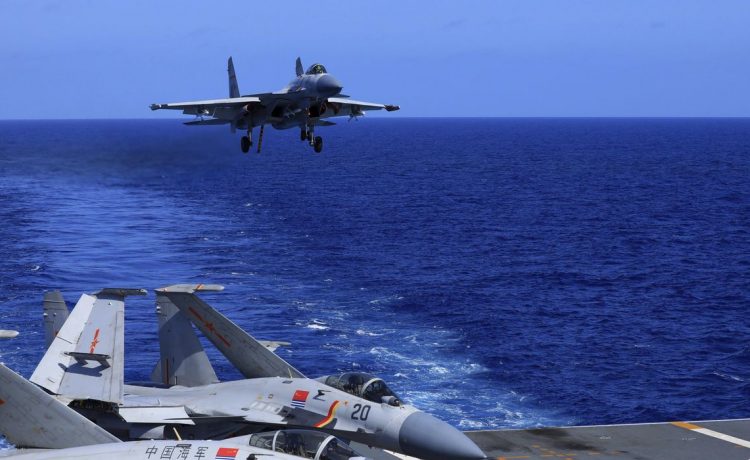 Beijing’s rapid large-scale buildup of nuclear weapons is a sign the Chinese military is moving away from its past defensive strategy toward the use of “nuclear coercion” to achieve Chinese Communist Party aims such as the takeover of Taiwan, according to a think tank report authored by a Strategic Command analyst.

Beginning in the 1960s, China built a small nuclear force and limited arsenal as part of a “no-first-use” policy.

Under President Xi Jinping, however, China is carrying out a nuclear expansion described by the Strategic Command as “breathtaking” and unprecedented in scale, according to a report by the National Institute for Public Policy.

“China’s nuclear modernization, when viewed in the context of its strategic ambitions and more dangerous security environment, poses a serious challenge for the United States and its allies,” the report states.

The report, “China’s Nuclear Modernization and Expansion: Ways Beijing Could Adapt its Nuclear Policy,” was written by Jennifer Bradley, a senior deterrence analyst at the Strategic Command. Ms. Bradley leads a team of nuclear analysts at the command and is the lead analyst for the Indo-Pacific region.

China’s nuclear expansion most recently involves the building of 350 ground-based missile silos in western China, a network that defense officials say will be used for 10-warhead DF-41 intercontinental ballistic missiles — representing a massive warhead increase from China’s estimated 250 strategic warheads only a decade ago. Other new strategic weapons include nuclear missile-armed submarines and bombers and hypersonic missiles.

Instead of a limited force, China will soon be able to use its expanded nuclear arsenal to match the U.S. and Russia as part of what the report calls a new “robust nuclear deterrence” strategy.

More alarming, the report warns that China could reject nuclear deterrence and move to a strategy of “nuclear coercion” — using threats of nuclear attack to pressure other states to make policy concessions. The report said that “a nuclear coercion policy would not only be focused on nuclear armed powers but would widen the aperture to non-nuclear states as well.”

“This would allow China to achieve its political ambitions by using its nuclear capabilities to coerce nations, especially regional nations, to acquiesce to Chinese desires,” the analyst wrote.

Weapons and delivery systems for such strategy would include additional precision strike nuclear missiles such as the DF-26 intermediate-range missiles. The DF-26, also known in Chinese state-media as the “Guam killer,” would “provide China the capability to make overt threats against regional nations, while the precision and lower yield of the warhead would make the threat more credible by limiting societal damage.”

Less concerning than nuclear coercion, would be China’s adoption of a “robust nuclear deterrence” approach with its expanded forces. Robust deterrence forces would “allow China to achieve other strategic goals beyond deterring nuclear attack and coercion,” the report said.

Nuclear deterrence forces would allow Mr. Xi to meet his goal of placing China on the level of the United States and Russia as a great power. However, the risk of nuclear war would increase under the new strategy.

“A robust deterrent strategy increases the risk of escalation in conventional conflict with China by injecting the possibility that China may escalate to limited nuclear use first,” the report said.

The report also states that President Biden’s statement that the United States was seeking to avoid a nuclear exchange with Russia over the Ukraine war will be exploited by Beijing.

According to the report, “if China assesses that the United States would be unwilling to risk a conflict that could escalate to the nuclear level, China would be able to achieve its regional objectives conventionally at a lower level of escalation.”

Nuclear threats could prevent the United States from defending Taiwan against a Chinese attack, and also would impact American defense ties to Japan, Philippines and other regional states.

“It is clear that China is building a nuclear force commensurate with achieving the goals of establishing a sphere of influence and dominance over regional neighbors while guarding against the increased danger its leaders perceive in the security environment,” the report states. “China’s nuclear advancements have created a shock in the international system that is uncertain and not well understood. Nor can it be fully understood as long as China remains opaque with regard to its nuclear expansion and doctrine.”

Chinese Embassy spokesman Liu Pengyu said China is “firmly committed” to a nuclear strategy of self defense and the minimum level of forces needed to defend the country. “We stay committed to the policy of no-first-use of nuclear weapons,” he said.

The Navy is working to build a new underwater drone called an “Extra-Large Unmanned Undersea Vehicle,” or XLUUV, as part of a program to build both unmanned warships and submarines.

According to a report by the Congressional Research Service, the Navy’s fiscal 2023 budget includes $60.7 million for development of core technologies for the XLUUV and other drone subs.

The large underwater drones will be transported to forward ports by ships and launched from piers. Capable of carrying large payloads, the initial cargo will be sea mines, including the developmental Hammerhead mine that can be tied to a seabed and fire an anti-submarine torpedo, the Navy said.

Although arming the drones with a nuclear weapon has not been mentioned by the Navy, the underwater weapon appears to be a Pentagon counter Russia’s soon-to-be deployed drone submarine called Poseidon, which is nuclear-armed. The Poseidon can destroy an entire port with its megaton-class nuclear warhead, according to U.S. officials.

Boeing’s Echo Voyager drone sub is about the size of a subway car and will be the basis for the Orca, the CRS report said.

The Echo Voyager is 51 feet long with a rectangular cross section of 8.5 feet by 8.5 feet and can accommodate up to 2,000 cubic feet of weapons weighing up to 50 surface tons. It can travel 6,500 nautical miles.

“Orca represents the leading edge of autonomous maritime vehicle technology and will have extended range and a reconfigurable, modular payload bay to support multiple payloads and a variety of missions,” the report said.

The carrier was to stop in Vietnam during the current operations in the sea, Radio Free Asia reported July 6. Then on July 22, RFA, quoting two Vietnamese sources, stated the port call was called off for unspecified reasons.

Navy Lt. Nicholas Lingo, a spokesman for the Seventh Fleet, declined to comment on the carrier’s potential operations.

“The United States and Vietnam are trusted partners with a friendship grounded in mutual respect,” he said. “We are committed to strengthening defense cooperation between the U.S. and Vietnam and look forward to continued engagement.”

A military official said of the port call that ship schedules change often. but the changes are not always publicized.

The scuttled visit also comes amid concerns voiced by President Biden over a planned visit to Taiwan by House Speaker Nancy Pelosi, who may travel to the island next month. Mr. Biden said Pentagon officials were recommending against the trip as too provocative to China at a tense time.

China affairs analysts say the canceled visit was likely the result of pressure from Beijing.

Carlyle A. Thayer, who writes the Australia-based Thayer Consultancy Background Brief, said Vietnam has been supportive of the Navy in the region because of its own territorial disputes with China over the Paracel Islands.

“Given China’s public comments criticizing the United States for being the root cause of tensions and instability in the Taiwan Strait and South China Sea and China’s military exercises in waters around Hainan Island and the Paracels, Vietnam likely assessed that it was inappropriate to host a visit by the USS Ronald Reagan,” Mr. Thayer said.

The carrier strike group, based in Japan, began sailing in the South China Sea July 13, the Navy’s Seventh Fleet said in a statement. Along with the Reagan, the Ticonderoga-class guided-missile cruiser USS Antietam and the Arleigh Burke-class guided-missile destroyer USS Higgins took part.

“While in the South China Sea, the strike group is conducting maritime security operations, which include flight operations with fixed and rotary-wing aircraft, maritime strike exercises, and coordinated tactical training between surface and air units,” the Navy said.

“Our presence in the South China Sea demonstrates America’s commitment to a free and open Indo-Pacific,” said Capt. Fred Goldhammer, commanding officer of the Reagan. “Every sailor onboard contributes to this important and enduring mission as we operate in this region, in accordance with international law to ensure that all nations can do the same.”