Inside the Ring: Omnibus bill to cut funds to Wuhan virology lab 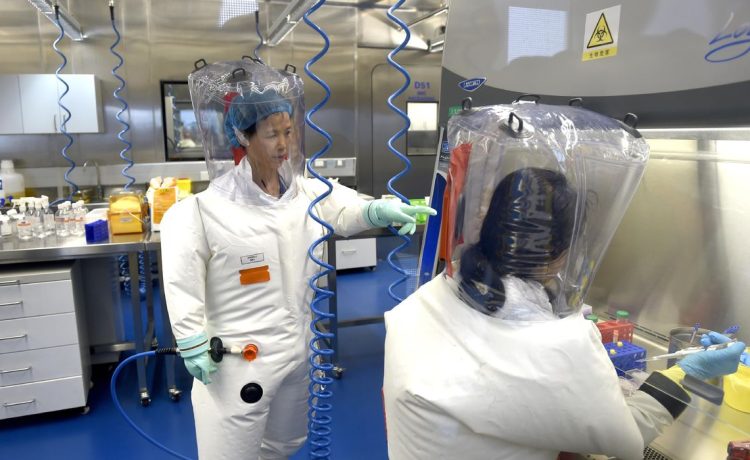 Congress’ $1.7 trillion omnibus spending bill to keep the government funded contains provisions that will prevent the Pentagon and State Department from funding China’s Wuhan Institute of Virology, considered a possible origin point for the virus outbreak behind the COVID-19 pandemic.

The spending bill is in the final stages on Capitol Hill and once finished could be signed into law by President Biden as soon as this week.

Critics note that the bill does not block funding by the National Institutes of Health for the controversial Wuhan laboratory where dangerous “gain-of-function” research on making bat viruses more infectious to humans took place prior to the December 2019 disease outbreak in that city.

The advocacy group White Coat Waste Project lobbied Congress to cut off all federal funding for both the Wuhan Institute of Virology and the U.S. NGO EcoHealth Alliance that has been linked to the institute by a former vice president, Andrew Huff.

Mr. Huff, an infectious disease epidemiologist, told The Washington Times earlier this month that EcoHealth took part in gain-of-function research at the Wuhan Institute of Virology. “I suspected that this was a lab leak from Day One, and as time went on, the information gaps that I had were filled,” he said.

EcoHealth Alliance, which Mr. Huff disclosed also worked with the CIA to spy on China, denied it was engaged in gain-of-function research with the Wuhan Institute of Virology, and Chinese officials strenuously deny the lab played any role in the origin of COVID-19.

In October, Sen. Joni Ernst, an Iowa Republican who opposed federal funding for both the Wuhan Institute and EcoHealth, said the National Science Foundation recently awarded a $1 million grant to EcoHealth Alliance for predictive intelligence for pandemic prevention and that a second grant of over $263,800 was in the works.

“Because EcoHealth broke federal laws, withheld evidence, and conducted dangerous research in unsafe conditions, this group should never be trusted to put its hands on taxpayer dollars or bats ever again,” Ms. Ernst said in a statement on Oct. 11. “Let’s defund EcoHealth and launch a real scientific investigation to find out once and for all what was really happening in Wuhan, China, so the same mistakes are never repeated again.”

Ms. Ernst teamed up with the White Coat Waste Project in initially disclosing federal funding for the Wuhan Institute in 2020.

Justin Goodman, senior vice president for advocacy and public policy at White Coat Waste Project, said the spending bill is not perfect but includes some major victories for his organization.

“As the group that first exposed wasteful government spending at the Wuhan lab via EcoHealth Alliance, we applaud Democrats and Republicans in Congress for listening to taxpayers and defunding these lawbreaking organizations whose dangerous virus-hunting and gain-of-function animal experiments likely caused the pandemic,” Mr. Goodman said in a statement.

“EcoHealth and the Wuhan lab violated a federal ban on gain-of-function experiments, violated transparency laws and policies, and obstructed investigations into COVID’s origins,” he added.

“This bill would start to turn off the spigot,” Mr. Goodman said. “Taxpayers should not be forced to bankroll reckless [research], waste money, abuse animals, break the law and place public health in peril. Stop the money, stop the madness.”

The anti-COVID lockdown protests that spread throughout China last month have triggered a government backlash that relies on high-technology mass surveillance, according to a report in the online intelligence newsletter SpyTalk.

The protests were the most visible and widespread popular opposition to President Xi Jinping and the ruling Chinese Communist Party since the mass protests in Tiananmen Square in 1989. However, the numbers of Chinese who took to the streets to oppose COVID restrictions, including forced quarantines and testing, were far smaller than those three decades ago.

Beyond anger at the health restrictions, protesters in some Chinese cities shouted, “Xi Jinping, step down” and “Chinese Communist Party, step down” in unprecedented public displays of anti-communist fervor.

Demonstrations broke out in 19 or more cities with protests with estimated crowd sizes of less than 50 people, according to the SpyTalk report.

“Though the numbers were small, it was a notable ‘political coming out of the closet,’ or ‘zhengzhi chugui,’ much discussed in Chinese social media,” according to the report by Matthew Brazil, a former U.S. government official in Beijing and co-author of the book, “Chinese Communist Espionage: An Intelligence Primer.”

The bold protesters risked certain arrest or worse and likely represented a larger portion of China’s 1.4 billion people who were more cautious in expressing their views for fear of retribution by the regime.

China’s government, faced with growing outbreaks of COVID that are spreading rapidly through a largely unprepared population, appeared to relent in recent days on some restrictions with an approach against the virus called “dynamic zero-COVID.”

According to SpyTalk, police actions after the protests died down included summoning participants to police stations, where they were forced to explain their actions and sign statements promising not to repeat them. One protester, whose experience likely was typical, explained that he was identified by police even after disguising himself by changing clothes and covering his face.

The identification was done by tracking his cellphone and scrutinizing mass video surveillance through China’s network of millions of cameras.

Protest leaders faced harsher treatment. One man who led chants in Shanghai calling on the Communist Party to “step down” was arrested at work and has since disappeared into the Chinese prison and interrogation system.

The anti-Xi and anti-CCP character of the protests shows that China’s efforts since the 1989 Tiananmen massacre to squelch such opposition, mainly by fueling strident nationalist feeling, have not succeeded.

The SpyTalk report said China’s mass surveillance system is backed by artificial intelligence and supported by components from American companies such as Intel, IBM, Seagate, Cisco and Sun.

“These firms and others have enabled the CCP to build surveillance systems that retain a massive baseline of data, paired with perhaps the world’s most advanced facial recognition technology,” the report said. “China’s system can save data on every phone user’s movement, activity, preferences and contacts, even if authorities have not specifically targeted them.”

Technology analysts say cellphones are the easiest devices for China to track as the entire system of cellphone numbers, SIM cards, cellphone devices and their IMEI or International Mobile Equipment Identity, is designed to be one huge surveillance system.

Bluetooth also was used by many protesters who had Apple phones — until Apple cut off use of the widely-used Airdrop feature in November, apparently at the request of the Chinese government.

Security analysts say protesters in China would be better off using computers — desktops, laptops and the internet that are designed for open communications channels. If there is no phone number attached to them, computers online are much more difficult to track. Mac addresses, the computer equivalent of an IMEI, can be changed and randomized easily.

Surveillance built into modern computers is not part of the original design and thus it’s much easier to be anonymous on a computer.

Four Republican members of Congress who wrote to the Strategic Command in response to the notification by the command that China has exceeded U.S. nuclear forces in one of three areas are pressing their demand for an unclassified report on the issue.

“We have not received any substantive unclassified report, as is required by law,” Justine Sanders, spokeswoman for the Republicans on the House Armed Services Committee, told Inside the Ring. “We continue to consider the reporting requirement unfulfilled and will seek to address this deficiency through the FY24 authorization process, if necessary.”

Earlier this month, the outgoing commander of the U.S. Strategic Command, Adm. Charles Richard, notified Congress under a defense bill signed into law in December 2021 that China’s military had surpassed U.S. nuclear forces in at least one of the nuclear metrics: warheads, intercontinental ballistic missiles or ICBM launchers. The specific area that the Chinese forces had exceeded those of the United States was not disclosed.

That notification prompted two senators and two members of Congress to write a letter to Adm. Richard saying that an unclassified version of the report was not provided as required by the law. A defense source said the Strategic Command response to the four lawmaker’s letter was to be sent, but was held up by the new commander, Air Force Gen. Anthony J. Cotton.

China’s nuclear forces have expanded rapidly with new missiles, warheads, submarines and bombers. The Pentagon’s latest annual report on the Chinese military predicted that the Chinese nuclear warhead arsenal, currently at around 400 warheads, will grow to around 1,500 by 2035.