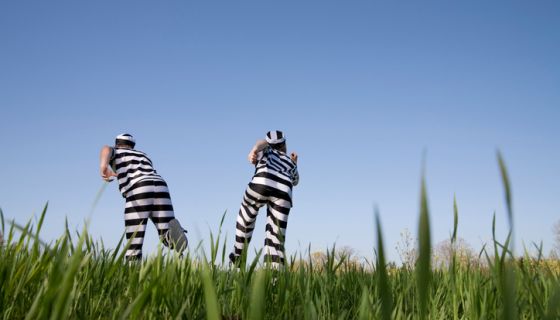 We told you it was coming…

By now, many of you have seen the viral video that shows a group of Utah Caucasians dressed up in their Hallow-racist Halloween costumes at Walmart. It’s as if every year, we have to tell white people it’s called “Halloween,” not “I’m Blackface and I’m Proud Day.”

Racist white people probably long for the day when they could just be racist in peace. They probably wish they could still celebrate the festivities by wearing blackface, Klan robes, swastikas or whatever white supremacist “costume” they desire without receiving any backlash for it. These days, they keep ending up on viral videos prompting investigations from various entities.

According to KSL.com, the video that showed blackface-clad teens dressed as prison inmates took place in Cedar City, Utah, and it has prompted an investigation by the Cedar City Police Department.

Police Sgt. Justin Ludlow said resource officers will investigate the video, but he also added that, unless there was any violence involved, it wouldn’t mean much since racist white people dressing in racist white people costumes isn’t illegal in and of itself.

KSL reports that it said in a statement it was “taking this matter seriously” and “will take appropriate action once that investigation is complete.”

“Based on the information we have obtained, preliminary findings indicate the individuals in blackface are not students enrolled in Iron County schools,” the statement reads. “Our district and schools promote inclusiveness and acceptance and denounce all forms of discrimination and racism whether those actions are on campus or off campus, in person or online.”

Jeanetta Williams, the president of the NAACP Salt Lake City chapter, said Tuesday that she spoke with Cedar City police — and that they, with the Iron County School District, had identified everyone in the video as students enrolled in Iron County schools, she said. That information has yet to be corroborated with officials.

While we’re on the subject of school district investigations and whether or not the teens are students in the district, it’s with noting that one of the white suprema-teens joked that “we all dropped out of high school, it’s OK,” after it was pointed out by a bystander that “you guys are never going to get into a college, you guys are not going to get any scholarships, because this is a hate crime.”

No investigation is likely to hold these teens accountable for their racism, but it sure would be nice if they were identified and their KKKosplay incident followed them around for the rest of their professional lives.